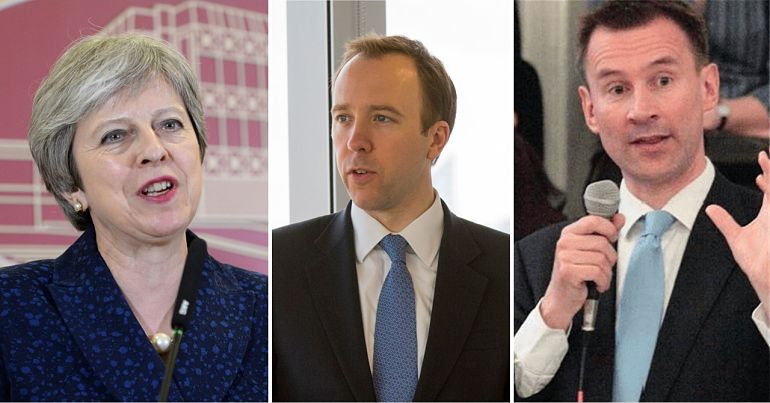 With the high-profile resignations of David Davis and Boris Johnson, Theresa May has had to reshuffle her cabinet. The issue is that the Tories the prime minister has promoted have an embarrassing thing in common: they all have abysmal views on the departments they now run.

Additionally, they are all white, middle-aged men.

May has promoted Geoffrey Cox to attorney general, meaning he is responsible for the rule of law in the UK. Yet Cox’s voting record shows he is unfit to head our legal system:

With Jeremy Hunt promoted to foreign secretary, the prime minister filled the position of health secretary with Matt Hancock. Even though Hunt is gone, it’s not good news for people who value a fully public NHS, as Hancock’s voting record and financial backers suggest:

May promoted former housing minister Dominic Raab to Brexit secretary after the resignation of David Davis. Leading the department for exiting the EU, the MP for Esher and Walton is responsible for protecting workers’ rights post-Brexit. But Raab has some backwards views on the matter, which this video from GMB union shows:

The Prime Minister has appointed someone to be Brexit Secretary who believes in weakening workers' rights.

Dominic Raab is a direct threat to UK workers.
SHARE the facts ↓↓ pic.twitter.com/Ryrxe6uX8z

Hit with the resignation of Boris Johnson, May promoted Jeremy Hunt to foreign secretary. But the MP for South West Surrey’s voting record and statements show he has some terrible views on foreign policy:

Jeremy Wright has replaced Hancock as culture secretary. Wright is now responsible for culture, digital, sport and media in the UK. But his record shows he:

May has gifted every one of her cabinet promotions to a white, middle-aged man. And all of them have awful opinions on the crucial sections of British society they now run. We need to throw these dinosaurs out of parliament, now.