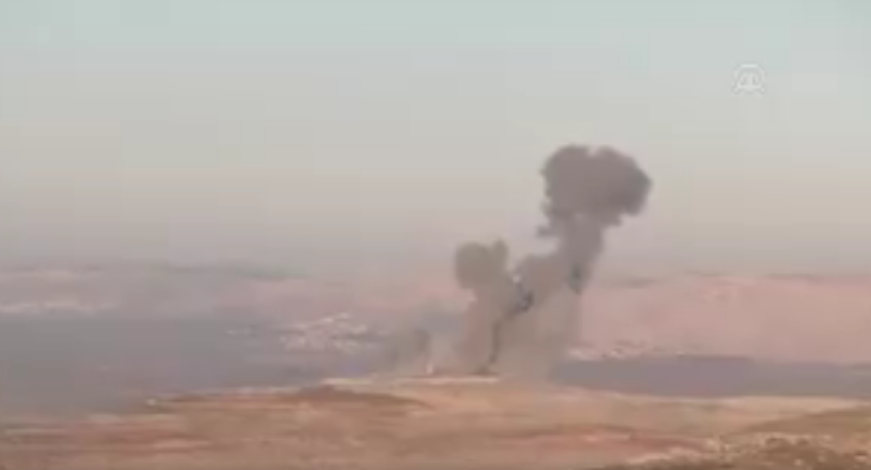 WARNING: This article contains disturbing images which may not be suitable for everyone and are not recommended for the faint-hearted.

Since 19 January, a key NATO member has been relentlessly bombing cities, towns and villages, reportedly killing men, women and children. The victims are Kurds. The perpetrator is Turkey. And the place is Afrin province, a largely Kurdish area of northern Syria.

Photos of alleged victims of the aerial bombing by Turkey have been posted on social media by authoritative sources. We have published them towards the end of this article.

The offensive by Turkey, called ‘Operation Olive Branch’, reportedly began after Russia withdrew from the airspace over Afrin.

The Syrian Democratic Forces (SDF), which have received support from the UK and the US in the war against Daesh (Isis/Isil), issued a statement condemning civilian deaths. They said the Turkish “occupation army” had been targeting civilian areas with 72 fighter jets.

The feminist Kurdish-led forces (YPG and YPJ) in northern Syria, which make up most of the SDF, have reportedly been some of the most effective ground forces in the fight against Daesh in recent years. In a statement on 20 January, the YPG also condemned alleged Turkish targeting of civilians.

Turkey claims its attack on Afrin is due to links between the YPG and the Kurdistan Workers’ Party (PKK). The Turkish state has fought against the PKK for decades, and routinely calls the group and its allies terrorist organisations. But the PKK (along with its allies) has condemned all attacks on civilians; and it was undertaking peace talks with Ankara until the latter ended them in 2015.

A “blatant act of aggression” against anti-terrorist fighters

Meanwhile, several leading human rights activists – including renowned political commentator Noam Chomsky – have published a letter demanding intervention from the international community to end Turkey’s attacks. The letter calls the offensive “a blatant act of aggression against a peaceful and democratically-governed region and population”. And considering the loss of thousands of Kurdish YPG and YPJ fighters in the battle against Daesh, it insists that the international community has “a moral obligation” to stand by the Kurdish people now. 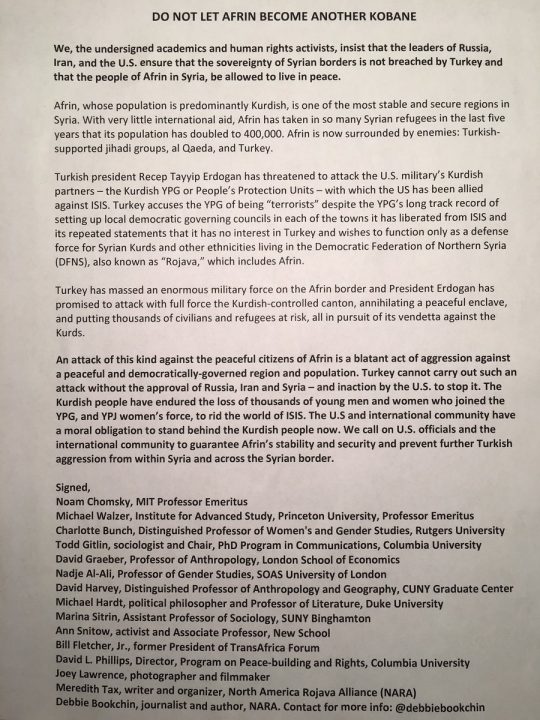 WARNING: Images from the Turkish offensive

The Democratic Union Party (PYD) is the most prominent political party in Afrin. It has shared the following images of an alleged massacre of civilians:

+18: The massacre committed by Turkey against a civilian family today in the villages of Afrin pic.twitter.com/ffYIh87KtU

Another war within Syria?

The SDF is now considering sending reinforcements to Afrin. And as a CNN report stated on 22 January:

if Turkey wants to seize the city of Afrin — and then launches a second front to seize the town of Manbij further east, another war within the war in Syria will erupt…

To stop this from happening, countries that have supported the SDF and YPG in their fight against Daesh must act.

– Write to Theresa May and your MP. Ask them to urge Turkey to stop its attack on Afrin immediately; and to resume peace talks with its internal opponents.

– Watch The Canary‘s exclusive interview with author and activist Rahila Gupta, who visited northern Syria in March 2016. Read more Canary articles on Turkey, Syria, and Rojava/the Democratic Federation of Northern Syria (DFNS). And see more international reporting from us at The Canary Global.