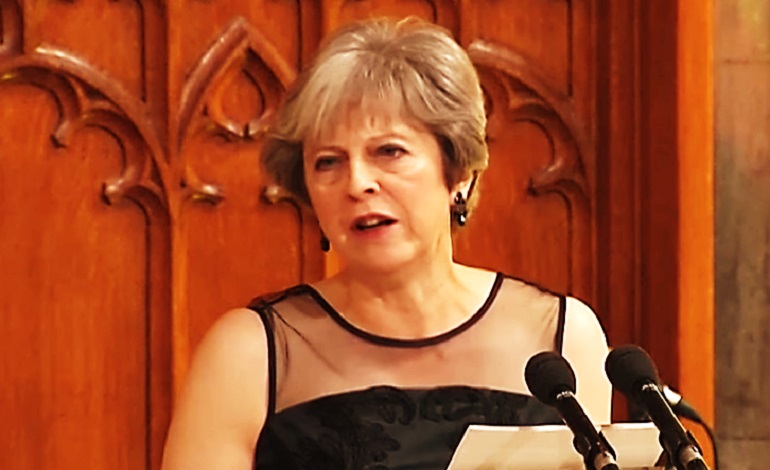 Not known for her ability to address an audience without problems – be it falling letters, comedy pranksters or cough sweets – Theresa May’s latest after dinner speech has gone down rather badly in some quarters; not least Scotland.

On Monday 22 January, the PM hosted a Burns Night “supper” at Downing Street, billed by Number 10 as a “celebration of the life and works of the famous Scottish bard”. May and husband Philip, along with Scottish Secretary David Mundell, hosted the “great and good” of Scotland; ‘great and good’, of course, depending on what side of the ‘IndyRef 2’ debate you sit.

But it was May’s speech that has raised more than a few eyebrows. The PM had planned to say:

Scotland is a greatly valued part of our United Kingdom and its contribution to the UK is immense – economically, socially, and culturally.

And Robert Burns is a great example of that, as one of our finest poets, famous world-wide.

I’m very much looking forward to this evening and the chance to celebrate a great poet, a great nation and an enduring Union.

No one could argue with May’s assertion that Burns was a “great poet”; or that Scotland is a “great nation”. But people did take issue with Burns and an “enduring Union” being mentioned in the same breath. Because as most people (except possibly May) seem to know, Burns was a staunch supporter of Scottish independence:

So Burns Night is a hugely important occasion celebrated all around world by Scots who want to acknowledge their National Bard, one of the greatest poets as well as Scottish culture. Vile Tory Theresa May exposes her arrogance & ignorance with misplaced comments about Burns Night pic.twitter.com/nmcuq32nsi

Bought and sold for English gold…

You’d think the PM could have guessed the Scottish Bard wasn’t a fan of the Union Jack. Take his 1791 work Such A Parcel Of Rogues In A Nation. Pouring scorn on the Scottish politicians who signed the 1707 Treaty of the Union, Burns said:

Fareweel to a’ our Scottish fame,
Fareweel our ancient glory;
Fareweel ev’n to the Scottish name,
Sae fam’d in martial story…

But pith and power, till my last hour,
I’ll mak this declaration;
We’re bought and sold for English gold-
Such a parcel of rogues in a nation!

Hardly the words of a fanboy of the United Kingdom. And this is just one example of Burns’s fervent support for an independent Scotland. But this seemed ‘nae bother’ to May, who happily munched on her neeps and tatties, supped “Scottish Whisky” [sic] and probably forced Philip to wear a kilt. Or at least a tartan jockstrap. Possibly.

What is unclear about May’s Burns Night PR-disaster is just who addressed the haggis. But what is certain is that Burns was probably spinning in his grave.

Featured image via The Washington Post/YouTube