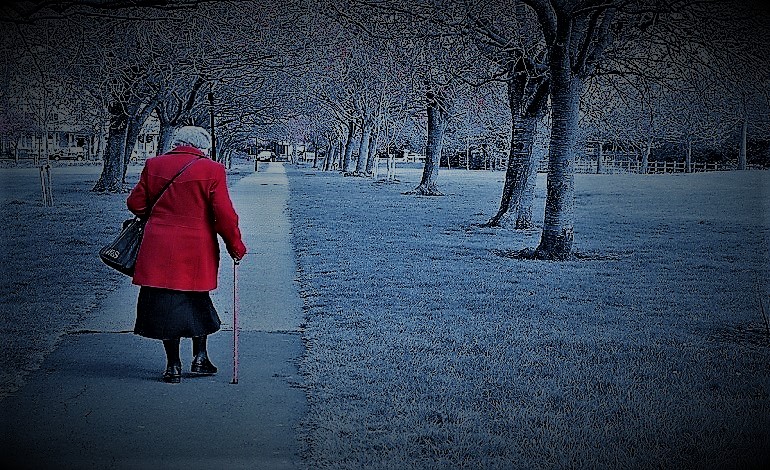 ‘Too cold’ to stay in her flat

We were stood outside Primark when we spotted the woman walking with a frame.

She was in tears and looked really upset so we asked her if she wanted soup or hot chocolate… She said she didn’t want it, I asked her what she wanted and she said clothes as she was freezing.

We then gave her a hat, gloves, scarf set and some hoodies. She told us that she was going to McDonald’s to warm up as her flat was too cold to stay in…

It’s heartbreaking to see, it’s hard not to get emotionally involved. As much as I love Swansea, it can be a tough place, she was freezing, it really affected us.

Mary’s case highlights the issue of fuel poverty in the UK.

As The Canary previously reported, the term ‘fuel poverty‘ means a household’s energy costs are above the national median average. And if a household spent this amount, it would leave it officially in poverty by the recognised standard.

In November 2017, the Office for National Statistics (ONS) released its ‘excess winter deaths’ statistics, which many link to fuel poverty. It showed that an estimated 34,300 more people died in the winter of 2016/17 than in other months; a 39.5% increase on 2015/16 figures. But the government is aware of the problem, as it found that [pdf, p5]:

Tory Britain: the age of loneliness?

But Mary’s story also poses questions: where was the social care for this seemingly frail and vulnerable woman? And, just as the government launched a Minister for Loneliness, why was Mary so isolated that no one was supporting her?

Nightmare situations like this are so predictable that you can only conclude they are planned in as a result of cuts in benefits, high fuel prices, and housing that is often poorly insulated, draughty, damp and mouldy. In the UK, one of the richest countries in the world, thousands died last winter because they could not afford to heat their homes.

Meanwhile, pensioners’ lunch clubs, meals on wheels, community centres and even libraries, where people go to keep warm, are closing. The misery and death experienced by so many may be acceptable to those implementing these policies. But like the three good Samaritans in this story, most people are outraged, and many are organising for change.

Thankfully, in Mary’s case, it seems that support came along at just the right time; Rees, Casey and Vickers have pledged to try and help, so she is never in that position again. But with social care in “crisis” and fuel poverty rife, it is now that communities need to be looking out for each other.

– Read more from The Canary on energy.