As the Tories implode over Brexit, the England team is sticking two fingers up at the far right - Canary 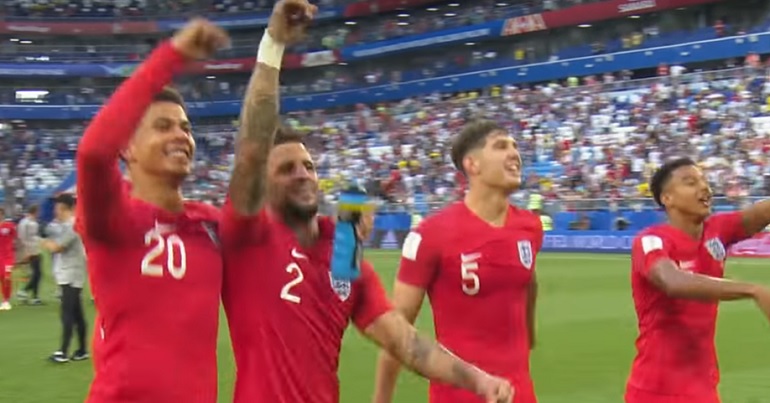 While everyone’s watching the Conservative government implode over Brexit, the England football team is sticking two fingers up at the far right.

The British right loves using immigrants as political scapegoats. And Brexit was no different. UKIP and others exploited people’s anger in the wake of the 2007/2008 capitalist crisis to argue that immigration was to blame – not the bankers. In fact, scapegoating was central to the right’s fearmongering campaign, which people compared to Nazi propaganda.

The far-right tabloids, meanwhile, fanned the flames. And the backdrop for all this was a Conservative government which, under Theresa May’s flagship policy of creating a “really hostile environment” for immigrants, had been threatening people with ‘go home’ vans.

The 2018 England football squad, however, is sticking two fingers up at those who have sought to scapegoat immigrants – by fielding “the most ethnically diverse squad to represent England at a World Cup”. London’s Migration Museum summed that up with one image:

The line-up for #England’s big #WorldCup game against Tunisia has been announced, but have you ever thought about what our team would look like without immigrants? #ThreeLions #ENGTUN pic.twitter.com/FSOAtvevoV

Others showed how players from immigrant families are playing key roles in all the major European teams:

Immigration is right at the heart of each team in the World Cup semi-finals. Indeed, the Independent has hailed the game between Belgium and France as a “celebration of immigration”. Half of these teams’ players have African roots, and over 78% of the French squad come from immigrant families.

47.8% of the England team, meanwhile, are the children of immigrants; including captain Harry Kane, whose father is Irish. And this squad has taken England to its first World Cup semi-final since 1990.

Kane's father was born in Ireland. Dier grew up in Portugal. Sterling was born in Jamaica. Lingard's grandparents came from Saint Vincent. Alli's father is from Nigeria. They represent England. UKIP don't. https://t.co/sjumYusJej

The diversity of England’s current squad also challenges the xenophobia of corporate tabloids, which consistently slander and belittle immigrants. In particular, the players’ public prominence helps to highlight the humanity of the immigrant population behind the scenes which usually faces the brunt of far-right attacks.

Brexit divided Britain. It brought xenophobia front and centre, along with the racist scapegoating of immigrants. And it ignored experts who insisted that the NHS would collapse without immigrant workers, and that the British economy needs such workers “in all sorts of sectors”.

But Brexit also raised real questions about who we are as a nation. And just as the Conservative government is imploding over Brexit disagreements, Gareth Southgate’s England squad is showing how immigration is a central part of who we are. As he pointed out recently:

In England, we have spent a bit of time being a bit lost as to what our modern identity is.

And he clearly thinks his squad is helping to define a modern English identity, saying:

We are a team with our diversity and youth that represents modern England… We are the reflection of a new identity and we hope that people connect with us.

The truth is that Britain’s big issue has never been immigration – but a lack of investment in housing, healthcare, education, and dignified employment.

Today’s Conservative government represents division and chaos. But it’s only a matter of time before we throw them out and start building a brighter future.

Let’s prepare for when that happens.

– If you have concerns about the way the government is conducting Brexit negotiations, write to your political representatives to let them know how you feel. Also, see more Canary articles on Brexit.

– Discuss Britain’s most pressing political issues with family members, colleagues and neighbours. And organise! Join (and participate in the activities of) a union, an activist group, and/or a political party.