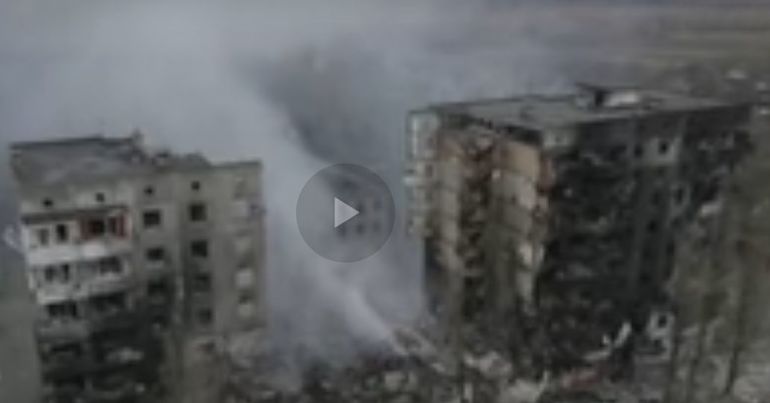 Correction 23/03/2022: The original version of this article included footage of an alleged Russian tank driving over a car. The nationality of the vehicle has been called into question so the footage has been removed.

Over several days, we’ve witnessed images and video footage of Russian military attacks on towns and cities across Ukraine. Most appear to be in residential areas. Footage shows bodies of dead Ukrainians or of the severely wounded crying for help. Much of the video footage was shared on social media. It reveals a war of sheer terror and attrition.

The reality of Vladimir Putin’s war

People on the frontline have filmed the reality of what’s happening, as well as the horrific consequences.

There are claims that Russia deployed cluster bombs in at least three residential areas in the city of Kharkiv:

The footage in this thread, shared by journalist Jake Hanrahan, shows the shocking aftermath of an attack in a residential area of Chernivsky (warning: graphic images).

This video on Twitter showed multiple missile attacks on a residential area in Kharkiv (referred to here as “Kharkov” – its name in Russian):

And here, what’s said to be a residential block in Kyiv has been drastically damaged by an attack:

Shown here is the bombardment of Chernihiv (first video) and the “absolute destruction” of Borodyanka (second video):

And there are claims that a thermobaric bomb launcher, which uses “oxygen from the surrounding air to generate a high-temperature explosion”, was heading for the Ukrainian border.

As previously published by The Canary, anarchist and political commentator Noam Chomsky has unequivocally stated that:

the Russian invasion of Ukraine is a major war crime, ranking alongside the U.S. invasion of Iraq and the Hitler-Stalin invasion of Poland in September 1939

An international treaty bans cluster munitions because of their widespread indiscriminate effect and long-lasting danger to civilians.

HRW added how more cluster bombs were used in an attack on a hospital:

On February 24, a Russian ballistic missile carrying a cluster munition struck just outside a hospital in Vuhledar, a town in the Ukrainian government-controlled Donetska region, killing four civilians and injuring another ten, six of them healthcare workers.

On 27 February, Ukraine’s president Volodymyr Zelenskiy issued an appeal for foreign nationals to come to his country to fight against the Russian invaders. He said:

Anyone who wants to join the defence of Ukraine, Europe and the world can come and fight side by side with the Ukrainians against the Russian war criminals.

If people want to support that struggle [against the Russians in Ukraine] I would support them in doing that.

Devon Live pointed out that under the Foreign Enlistment Act 1870, it is an offence for a UK citizen to “fight for a foreign power at war with a state the UK is at peace with”. But it fails to mention the “last successful prosecution” under this act: that of Leander Starr Jameson in 1896. Moreover, Devon Live added that the legislation: “was not able to be used against people enlisting in the French Foreign Legion, or fighting against general Franco in the Spanish Civil War in the 1930s”.

Should it be shown that someone aided or joined a proscribed terrorist organisation, they could face prosecution in the English courts. But in a 2020 case, charges were dropped against three British men in regard to support for the mainly Kurdish YPG (Peoples Protection Units). This was after it was shown that British authorities had not banned the units, which were provided with British military support. As for Shamina Begum, she lost her British citizenship after being accused of joining Daesh (Isis/Isil), though she was groomed as a 15-year-old.

Meanwhile people across Europe are offering support to the people of Ukraine in other ways.

For example, in Berlin hundreds of people welcomed refugees as they arrived from Ukraine, offering them accommodation:

Thousands of people in Berlin have gone to the central train station to offer fleeing Ukrainians a place to stay. Really moving. pic.twitter.com/OReuMnHcfk

This Romanian website lists a number of sites that are providing assistance to Ukrainians, while this site lists “Real ways you can help Ukraine as a foreigner”. And this website provides information on how to provide accommodation to Ukrainian refugees.

There have been demonstrations across Europe in solidarity with the Ukrainian people. For example, on the weekend of 26/27 February, Berlin saw at least 100,000 demonstrators take to the streets and thousands gathered in the Estonian capital of Tallinn. It was the same in Bern, Helsinki, Paris, Rome, Vienna, Sofia, Madrid, Brussels and London.

And in Russia, undaunted by the likelihood of years of imprisonment, anti-war protesters are planning more demonstrations in a number of cities:

Putin’s ‘rationale’ for the war

On 21 February, in a televised address, president Putin explained his rationale for taking military action against Ukraine. He further explained that he regards the people of Russia and of Ukraine as being one. Moreover, he believes Ukraine is not a sovereign state and that it was “entirely created by Russia”.

Some of Russia’s concerns about NATO expansion were outlined by a former US ambassador to the Russian Federation in this leaked cable, published by WikiLeaks.

An article in The Conversation summarises some of the arguments regarding Russian-Ukrainian relations. For example, it’s argued that from the Russian perspective:

Russia’s security concerns are in fact genuine, and that NATO expansion eastward is seen by Russians as directed against their country. Putin has been clear for many years that if continued, the expansion would likely be met with serious resistance by the Russians, even with military action.

However, the irony is that should Putin succeed in annexing much of if not all of Ukraine, Russia could end up bordering three additional NATO member countries: Hungary, Romania and Slovakia. Either Putin has not thought this aspect through, or he also has designs to expand the Russian Federation beyond Ukraine.

Media shutdowns, but no place to hide

Much of the footage of attacks on Ukrainian residential areas will not be seen by people in Russia now that Facebook and Twitter are blocked by the Russian authorities. This follows restrictions on Sputnik and Russia Today in the EU. Russian television “liberal” stations TV Rain and Ekho Moskvy have also closed down. That is reportedly because they deliberately broadcast “false information about the actions of Russian military personnel” in Ukraine.

Meanwhile there’s documented evidence to support that the Russian military has committed war crimes. Consequently, Putin and his generals and ministers can be subject to arrest and prosecution at the International Criminal Court should a case be established.

But that is of little comfort to the people of Ukraine, many of whom have lost everything – their family members, their homes, their cities. They want the war to end not in weeks or months but now.