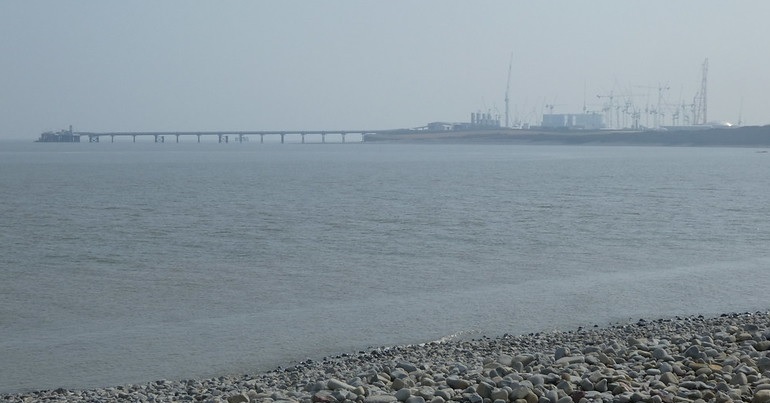 A campaign group is taking the government and energy giant EDF to court. The legal action, which takes place from 8 to 10 March, aims to stop EDF from dumping dredged mud into the Severn estuary. The estuary is an internationally designated protected area.

The Save the Severn Estuary coalition argues that the mud contains “chemical and radioactive contaminants“. It adds that dumping it into the estuary, on top of other plans by EDF, poses a danger to the safety and wellbeing of people and other animals in and around the waterway.

The High Court action relates to EDF’s Hinkley Point C power station, which is currently under construction. As part of the current works, the energy company is dredging mud from around Hinkley Point. This is to make way for a seawater cooling system for its new plant. Hinkley Point is the site of nuclear power plants Hinkley A, Hinkley B, and the planned Hinkley Point C. While Hinkley A stopped operating in 2000, Hinkley B is due to cease electricity generation this year.

EDF plans to dump the dredged mud into the Severn estuary near Portishead on the English side of the waterway. The government Marine Management Organisation (MMO) approved the planned dump in 2021. But Save the Severn Estuary is challenging the plan in the judicial review. The group is a coalition of scientists, experts, individuals and campaign groups like Stop Hinkley.

Save the Severn Estuary argues that the way the MMO granted the dumping license – by amending an existing one rather than creating a separate one – was unlawful. It also asserts that the authority failed to fulfil the requirements of both the Waste Framework Directive and the Water Framework Directive. And in the case of the latter, unlawfully so.

EDF faced legal action in 2018 for dumping mud on the Welsh side of the estuary near Cardiff. That action established that the dumping – which drew mass public opposition – hadn’t been subject to an environmental impact assessment.

Leigh Day is representing Save the Severn in the High Court case. The coalition is crowdfunding its legal costs.

Save the Severn has multiple concerns about EDF’s operations for Hinkley Point C, as Super Furry Animals pointed out on Twitter. The band’s keyboardist Cian Ciarán is involved in the Save the Severn campaign:

For what you're about to read, we're truly sorry.

That we're even in this situation is utterly ludicrous.
But the ramifications of inaction are unimaginable.

We *need* your support.

Save the Severn says there are radioactive particles from Hinkley A and B in the sediments the company plans to dump near Portishead. EDF, however, insists the mud is safe. Its head of environment Chris Fayers told NME in a statement:

Mud dredging in the Severn is normal practice and extensive testing by the Government’s marine science agency, the Centre for the Environment, Fisheries, and Aquaculture Sciences, has shown the mud is safe and poses no risk to the public or the environment.

As Wales Online reported in October 2021, an MMO spokesperson has also said:

The marine licence variation was agreed following three months of statutory public consultation and based on the best available scientific evidence.

The campaign group asserts that some microparticles “fall below” the sensitivity of the official tests. Other analyses found something different. France’s CRIIRAD laboratory and an independent “Citizen’s Science” survey found evidence of radionuclides around the region’s waters. Radionuclides are radioactive forms of elements. Some of them can occur naturally but they can also be byproducts of the nuclear industry. Both analyses detected the radionuclide Americium, which they say indicates the presence of plutonium.

Marine radioactivity researcher and campaigner Tim Deere-Jones warned about the implications of the independent survey’s results. Deere-Jones said the results gave “serious grounds for concern” over historic radiological contamination from Hinkley and the current dumping of mud in the estuary.

EDF’s plan for its cooling system is also of grave importance. The company is building a seawater cooling system that will suck in and then release huge amounts of seawater. A Hinkley report commissioned by the Welsh government raised concerns over the system, saying:

The Wildfowl & Wetlands Trust has explained that, although the cooling system has a mesh, this will only protect the machinery and stop larger fish getting sucked into it. The trust said:

Many fish will die either pressed against the mesh, or in the system of buckets and chutes which will return injured fish, along with the dead, back to sea.

Save the Severn also told The Canary that any biocides used to prevent the blocking of machinery with algae or other organisms would be of environmental concern. It’s further asserted that as the water that’s returned to the estuary will be heated up, it will “change the ecology” of the waterway.

EDF has requested to remove one of the mitigation measures its current license demands. This is an acoustic fish deterrent and aims to limit the amount of fish that could perish. The mitigation measures overall, however, would do little to protect non-hearing species like eels and lampreys, Save the Severn said.

The project has applied to remove one of three planned measures after studies from government marine experts showed it would have a negligible impact on local fish populations. Installing dozens of sound projectors in fast-flowing water two miles offshore poses risks to divers that cannot be justified for a system that will have little environmental benefit.

A company spokesperson, meanwhile, said that the impact on fish mortality of relying on other mitigation measures solely would:

have no effect on the sustainability of each species nor on the predators that rely on the fish to survive.

But the Hinkley report pointed to research that showed “the estimated annual capture rate” will be  “over 182 million fish, and it is likely that many of these will not survive”.

Ciarán has also highlighted that:

The Hinkley report to Wales’s First Minister advised that alternative on-land cooling systems should be used, but the Welsh Government failed to press this on the MMO.

He said that the upcoming court action is:

George Eustice, secretary of state for the Department of Environment, Food and Rural Affairs, will decide whether to grant EDF’s request.

As the secretary of state for business, energy and industrial strategy Kwasi Kwarteng recently highlighted, nuclear power is at the helm of the UK plans to bolster its ‘green’ or renewable energy potential. Laying out the government’s priorities in any move away from gas, Kwarteng tweeted:

Firstly, new nuclear. Needed when the the wind doesn’t blow and the sun doesn’t shine.

We are reversing 30 years of drift with the first new power station in a generation, more cash for future large projects, and our Nuclear Bill to unblock financial obstacles.

But the touted nuclear projects have regularly met with opposition, due in no small part to the ecological damage they purportedly risk. Wildlife-focused charities have, for example, warned that proposed nuclear plants Bradwell B in Essex and Sizewell C in Suffolk pose a threat to wildlife and their habitats in those areas.

Meanwhile, the coastal locations of these two proposed nuclear projects put them at risk of falling victim to the impacts of the climate crisis, such as sea level rise and increased extreme weather. Andrew Blowers, emeritus professor of social sciences at the Open University, argued that:

given the threat to the integrity of the sites and the risks to present and future generations and environments, the proposals should be scrapped forthwith

In short, although mud dumping is the main focus of the upcoming court hearing, it’s not the only potentially problematic element of the government’s nuclear power plans.

The interlinked nature of the twin crises of biodiversity loss and climate chaos demands that politicians prioritise both, as international authorities have asserted.

Any plan that involves the sacrificing of wildlife in pursuit of renewable energy is not an acceptable option.