The jig is up on 'green' credentials of burning trees for energy, climate committee remarks suggest - Canary 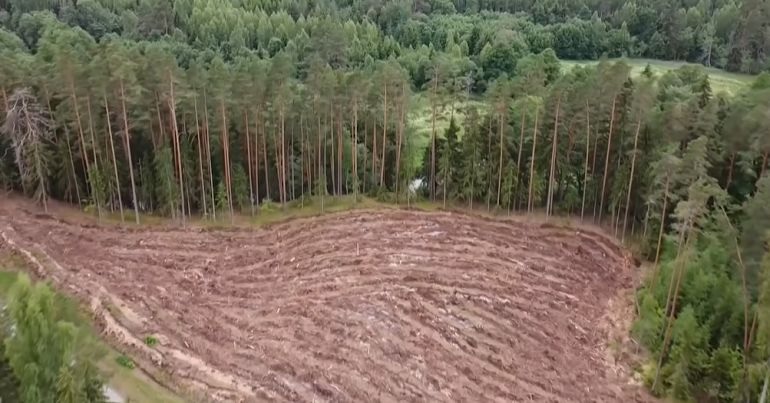 Burning biomass – namely wood – for energy is a key feature of the UK’s net zero plans. The government already heavily subsidises energy company Drax’s tree-burning power plant. Meanwhile, it’s poised to potentially provide masses of further funding to Drax and other energy and industry giants to try and develop carbon capture and storage (CCS) capabilities to reach net zero. The government currently categorises bioenergy as a ‘clean’ fuel due to the fact that, over long timeframes, wood can be a renewable source.

Campaigners and scientists have challenged the green credentials of bioenergy, and bioenergy’s CCS potential, known as BECCS, though. And recent comments from a senior figure on the UK’s Committee on Climate Change (CCC) suggest that officials are finally listening to their warnings. The jig could well be up for the ‘clean’ credibility of this energy source.

The CCC’s head of carbon budgets addressed the Environment Audit Committee (EAC) on 5 January. Dr David Joffe gave evidence to the EAC on negative emissions technologies. BECCS is one of these potential technologies, whereby bioenergy plants could theoretically capture the carbon produced during production processes on a large scale and store it to avoid it entering the atmosphere.

Scientists have, however, raised concerns over the potential environmental impact of bioenergy and the uncertainties surrounding its large-scale carbon removal potential. Campaigners, meanwhile, have shown that bioenergy is incredibly carbon-intensive and evidence indicates that it’s already driving the destruction of long-standing, carbon-holding forests. The thinktank Ember has also estimated that Drax’s proposed new BECCS power plant could cost over £31bn in public subsidies over a 25-year lifespan.

Joffe’s recent comments suggest that the CCC is heeding those warnings. Responding to a question from the EAC on “concerns about the sustainability of biomass as a source of fuel for BECCS”, he admitted this was a “key issue”. Joffe said:

There are big challenges to ensuring the sustainability of biomass grown outside the UK. It is not impossible but it is very difficult.

The head of carbon budgets continued, asserting that the UK shouldn’t be “relying on” biomass imports on a “large scale” for its greenhouse gas removal plans.

In response to Joffe’s comments to the committee, Sasha Stashwick, who is a senior advocate with the Natural Resources Defense Council and a campaigner with Cut Carbon Not Forests, said:

It’s refreshing and encouraging to see the Climate Change Committee speak plainly about the problems associated with Drax-style BECCS. Drax burns millions of tonnes of trees imported from forests around the world. These supply chains are known to be high-carbon and high-risk. Handing the company tens of billions more in subsidies for BECCS would be throwing more good money after bad and undermine the UK’s climate goals.

As the New Civil Engineer pointed out, Joffe’s comments are also highly significant in relation to the future of Drax and biomass’ inclusion in the UK’s climate plans. It wrote:

The government has so far closely followed the CCC in its recommendations for using GGRs [greenhouse gas removals] for reaching net zero so any shift in position from the CCC could be a precursor to a shift in policy from the government.

In a comment to the publication, Drax asserted that:

Both the CCC and the UN’s IPCC state that BECCS has a critical role to play in addressing the climate crisis by permanently removing CO2 from the atmosphere whilst generating renewable electricity – no other technology can do both.

Both the CCC and the UN Intergovernmental Panel on Climate Change (IPCC) have considered the involvement of BECCS in various potential climate pathways. But, as Joffe’s comments show, these positions are not static and they can respond to emerging evidence on the sustainability of biomass and its carbon-removing potential.

Drax also characterised its biomass as “sustainable”, stating that it “meets the stringent criteria set by the UK government and EU”. But this criteria doesn’t prevent the “leveling of rooted trees for wood pellet production”, as CNN has pointed out. The company also stated that:

Independent research for the Coalition of Negative Emissions [sic] shows there is enough sustainable biomass globally to remove 2Gt of CO2 each year by 2030.

It should be noted that the Coalition for Negative Emissions, which Drax referred to in its statement, is made up of organisations from the energy, aviation and farming sectors, among others. Drax is itself a member of the coalition. Launched in 2020, it is dedicated to “developing pioneering projects that can remove carbon dioxide (CO2) and other pollutants from the atmosphere”.

The UK government is currently facing legal action over its net zero strategy. Both ClientEarth and Friends of the Earth filed claims against it on 12 January. The government’s reliance on speculative technologies that may not deliver emissions cuts far enough or fast enough are central to those claims.

Campaigners argue that BECCS very much falls into this category. Stashwick asserts that it:

will not deliver negative emissions and in fact risks increasing atmospheric CO2 concentrations within timeframes relevant for climate action under the Paris Agreement. Government climate plans reliant on this technology should be treated as high-risk for people and planet.

Moreover, she says that: