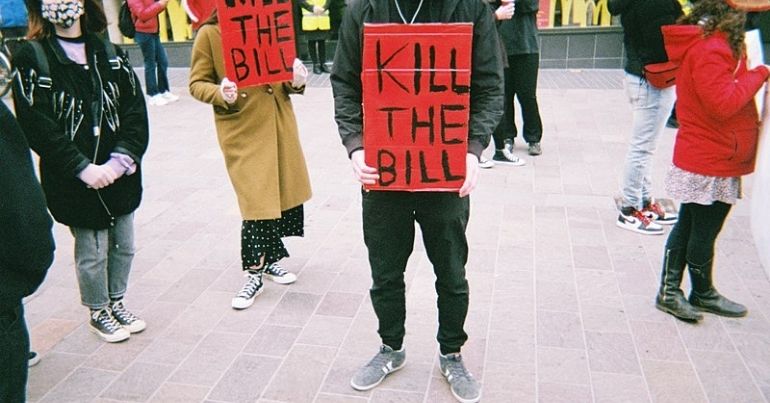 Activists are gathering across the country this Saturday to fight back against the Tory’s draconian Policing Bill. Kill The Bill protesters are set to turn out in force. As extensively reported by The Canary, the legislation expands stop and search powers and criminalise the livelihoods of GRT people among other things. And human rights charity Liberty has called the bill an “assault on basic civil liberties”:

No Borders Manchester tweeted a list of locations where you can join the fight against this authoritarian new law:

COME JOIN US AT 1PM ON SATURDAY 15TH (THIS SATURDAY!) IN ST. PETER’S SQUARE. WE’LL BE THERE WITH KILL THE BILL MANC, READY TO PROTEST THESE HARMFUL BILLS.

Be sure to see where else you can join in across the country – thanks to @collectiveactuk for the graphic pic.twitter.com/EP1azsICFN

In the north of England these include:

There will also be demonstrations against the bill in the Midlands:

MAP IS LIVE for #KilltheBill National Day of Action, 15 Jan!

Meanwhile, please keep calling/emailing the Lords to show them why it's so important not to let the govt get away with this shameless power grab!https://t.co/H4HN8dD0o9https://t.co/dTCqk22eXr

Additionally, the main London Kill the Bill demo will start at Lincoln’s Inn Fields from 12pm.

Some of those taking part explained their reasons for doing so. Gypsy Roma and Traveller community member Anne Marie:

Under the bill, our vehicles, which are often our only homes, could be confiscated and destroyed, whilst parents could be imprisoned and their children taken into care

All of disabled people’s rights and freedoms were gained by us going out and protesting to demand them. All the harm and damage done to disabled people by government policies over the last ten years since austerity was imposed, would have continued unchecked without our community being able to come out onto the streets and tell its own story. These changes will affect disabled people’s right to protest and make us slide back to a state of disability apartheid, that we fought so hard to break down.

The coordinator of the Muslim LGBT Network, Ejel Khan:

As a person of colour and a Muslim I have been stopped and searched on several occasions and the authorities need no reasonable justification now to continue to racially profile individuals such as myself. If the bill is passed racial divisions in society will become more entrenched than they currently are. This is state-sanctioned apartheid, which positively discriminates against minority ethnic communities.

Protest has done so much for people who look like me. If it wasn’t for protesters such as Paul Stephenson, who was once considered disruptive, Black people in this country wouldn’t be able to ride on a bus in some cities or even buy a drink in a bar. This bill seeks to silence our fight against injustice while persecuting me for wanting an equitable society.

As a health worker, I think it is essential that we have the right to protest without fear. Too much is at risk. How can being annoying or a nuisance compare to millions of operations and medical appointments cancelled and 100,000 unfilled NHS vacancies.

Stand up for your rights

The proposed law is currently at the report stage, with some calling this weekend’s demonstrations the “last legal protests”:

Kill the Bill actions on Saturday have been branded 'the last legal protest'. The bill, which threatens our right to protest, is now in the report stage before its third reading in the House of Lords, after which it could enter the final stages before Royal Assent.>>

And in the meantime, it’s a good idea to support those Kill the Bill activists currently in prison. As The Canary reported on 11 January, 10 people are currently in jail for the demonstration in Bristol in March 2021. On 9 January supporters held a solidarity demonstration for the eight held at HMP Portland in Dorset.

One activist told The Canary:

Noise demonstrations like this are extremely important. We do this to remind those who have been imprisoned that they are not alone, and that the struggle continues on their behalf outside of the prison walls. People are not forgotten as soon as they are behind bars. They are bearing the consequences of the repressive laws that we are fighting against, and they remain a central part of our movement.

So whether it is prison solidarity, turning out for the protests this weekend, or both, its time to get involved with the fightback against Priti Patel’s authoritarian Policing Bill.