The Canary is no fan of Keir Starmer’s Labour Party. But we’re even less of a fan of the Daily Mail. So, when it a) uses doctored photos which a Tory minister defends, and b) doorsteps a 14-year-old child, enough really is enough. Because there’s clearly no barrel-bottom the right-wing shitrag won’t scrape.

First, the Daily Mail was still droning on about Starmer’s alleged lockdown party. It ran an ‘update’ on the story on Monday 1 May, saying that Tory MPs were ‘demanding’ evidence that the event was actually just a food break during work. The story is quite obviously an attempt by the Tories and the Daily Mail to distract from the government’s own partygate scandal. But as one Twitter user noted:

Not very bright members of the Tory party incapable of separating needing to eat after working late whilst staying in a hotel that doesn’t serve food, and ignoring rules imposed on everyone else – many times.

In the piece, the Daily Mail used a photo of Keir Starmer eating a curry – clearly to get clicks. But the photo was actually of Starmer with the late Labour MP Frank Dobson – who died in 2019:

Not that culture secretary Nadine Dorries cared – the minister who has oversight of the press. She shared the Daily Mail story. Dorries even defended it doctoring the Starmer/Dobson picture, because, she claimed, it was a “stock” image:

Oh Chris, behave. It’s a generic stock photo and they are used all the time as you well know.
Just like the pictures of the PM with a birthday cake outside a school -not in cake free Downing St.

Frank was a lovely man, we can all agree on that.

Even the Daily Mail seemed to know the picture wasn’t a “stock” photo. Because it didn’t label it as such in the article until sometime on Tuesday 2 May. In the original copy of the story, it was just marked as this: 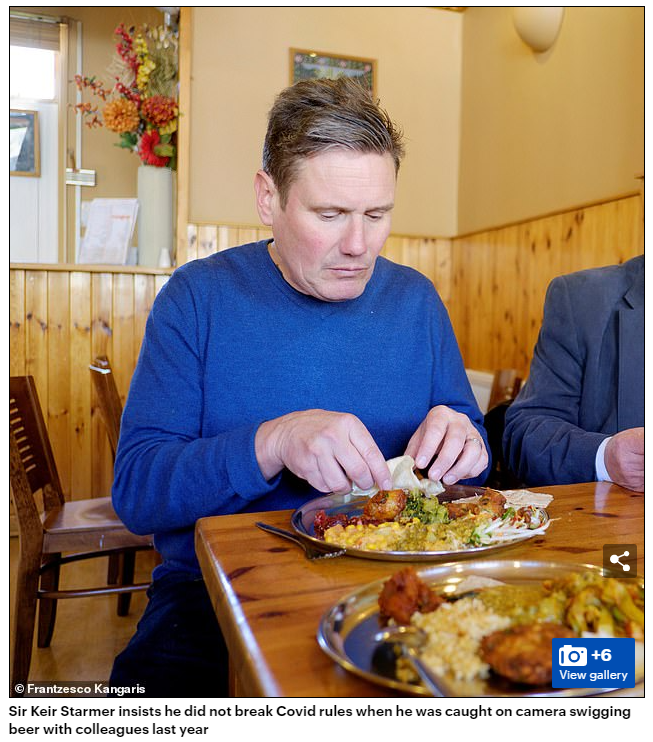 But this wasn’t the end of the Daily Mail‘s shitshow.

The reporter asked for information about their parents, without an adult present, and only revealed their identity afterwards. This behaviour is despicable and a clear breach of journalistic ethics.

Foy has written to the Daily Mail editor as well as “other outlets”. But we all need to take more action than that.

When a right-wing tabloid continues to act with zero professional standards, the UK corporate media is broken. The Daily Mail making up shit and harassing members of the public is not a new low for it, but its action sum up its MO. The UK needs change, and that starts with supporting independent media.

Featured image via Woodley Wonder Works – Flickr, resized to 770×403 under licence CC BY 2.0, and Kerry-Anne Mendoza