Eustice: minister tells poor people to buy value brands and get a job 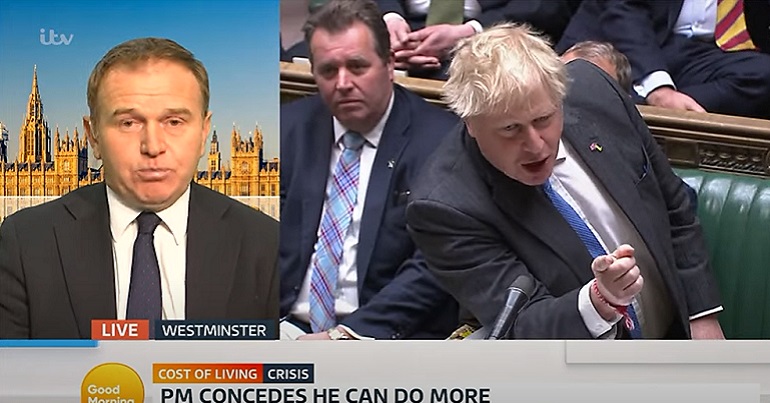 The government wheeled-out minister George Eustice to do the breakfast TV rounds on Wednesday 4 May – and his appearances underscored the class war that his party is currently waging.

If Elsie was my mum she’d be eating value brands…

First up, Sky News‘s Kay Burley probed Eustice on Boris Johnson’s comments about Elsie. This was the story of a 77-year-old who only eats once a day and rides around on buses to keep warm because she can’t afford to have her heating on. The environment secretary said if Elsie was his mum he would tell her:

Elsie may well be thinking ‘thank fuck I’m not George Eustice’s mum’. Because he also had some top money-saving tips for the plebs.

Generally speaking, what people find is by going for some sort of value brand rather than own branded products they can actually contain and manage their household budget.

Brilliant advice from the guy responsible for food supply chains and security. Because as National World reported, some supermarkets have already hiked the price of value brands by up to 29% this year.

You can’t afford to eat? Excellent!

The British Retail Consortium has said that shop prices have risen at their fastest rate for a decade. But Eustice thinks its OK to trumpet the fact that the UK has:

the lowest [household spending on food] in Europe

Probably because we can’t afford to fucking eat, George.

Over on Good Morning Britain (GMB), Eustice’s response to Susanna Reid’s question that the government isn’t doing enough was:

As Reid summed up, the Tories are essentially saying ‘get a job or you’re on your own’. Not that this attitude is new.

As The Canary previously wrote, the Tories’ idea behind Universal Credit was to push:

everyone possible into work, and those in work into more work; making welfare reliance impossible. And anyone left? It’s their own, stupid fault…

But it would also put all those unwilling to help themselves out of poverty and welfare into one place. Sick, disabled, unemployed and low earning people would no longer be different, distinct benefit groups. They would become one, homogeneous ‘underclass’ of people.

Another major problem with Eustice’s comments is people’s responses to them: “hapless“, “poor excuses“, “out-of-touch” and “simply not understanding” to name a few. No, no, no! These kinds of statements imply the Tories are somehow making mistakes or don’t ‘get it’, absolving them of responsibility. The government knows full well what it’s doing. As The Canary previously reported, the government know that the poorest households are being devastated by corporate greed and their own inaction.