Here's why The Canary is going Green for Grenfell - Canary 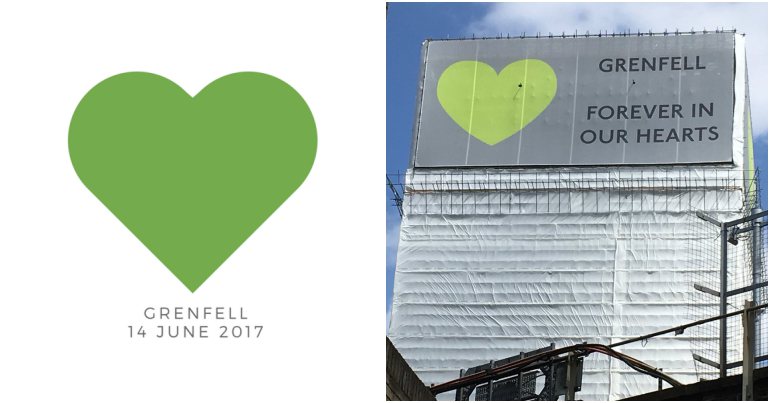 On 14 June 2017, a fire at Grenfell Tower killed 72 people. Two years later, bereaved families and survivors will gather to honour the memory of those lives lost. With love and in solidarity for everyone involved in the tragedy, The Canary is Going Green for Grenfell.

Forever in our hearts

The Green For Grenfell campaign:

aims to create awareness to ensure the tragedy of the Grenfell Tower fire is never forgotten and the memory of the victims and survivors remains in the hearts and minds of the nation.

A public inquiry is ongoing. But although the first inquiry report “was due this spring”, it’s now been “delayed until October”. Survivors and bereaved families still have no answers and no one has been held accountable for the tragedy. As Justice 4 Grenfell explained, the fire:

was a huge indication that ‘urgent and very far reaching reforms’ on a range of issues were required; from fire safety, social housing, inequality and deregulation to name a few.

Ongoing public awareness of this tragedy is vital, both to honour those affected and to ensure nothing like this ever happens again.

The fire left “202 households in need of rehousing”. Theresa May promised “Grenfell survivors that they would be rehoused [within] two weeks”. Yet nearly two years later, 17 households are still in temporary accommodation.

As The Canary reported, the public inquiry into the fire said that evidence “strongly supports” the idea that the tower’s cladding played a role in the fire’s spread. Yet hundreds of buildings still have similar cladding, and government funding is not available to replace it.

Grenfell United, a group of “survivors and bereaved families”, highlighted the ongoing issues of highrise buildings around the UK. Many still have Grenfell style cladding; others don’t have sprinklers or working fire doors. On 12 June, it beamed messages onto buildings in London, Manchester and Newcastle as a poignant reminder that too many lives are still at risk unless the government takes urgent action:

.@GrenfellUnited has shone a spotlight on tower blocks across the UK that are still unsafe 2 years after #Grenfell. It's time to #DemandChange.

Despite the enormity of this tragedy, bereaved families and survivors still need our support two years on. So The Canary is going Green for Grenfell for three days. Along with activist and rapper Lowkey, The Canary will also be on the ground meeting with survivors and campaigners and walking silently in memory of the 72 lives lost and to demand change so that nothing like this can ever happen again.