Assange judge refuses to step down, despite evidence of intelligence and defence links - The Canary 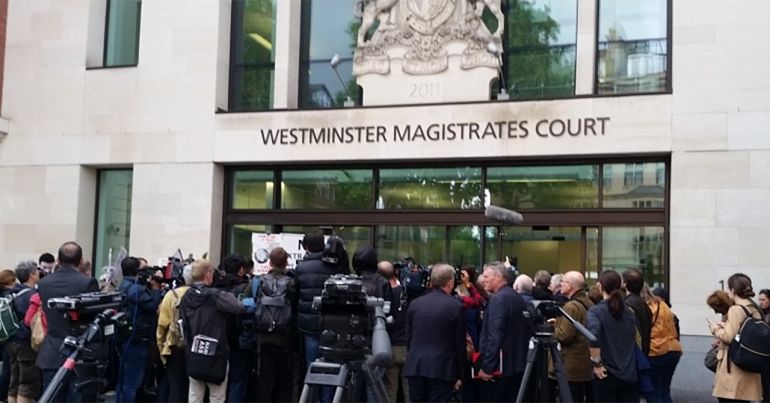 Accusations of a conflict of interest have emerged regarding the judge presiding over the pre-extradition hearings of WikiLeaks founder Julian Assange. Indeed, there appears to be overwhelming evidence of family links to the defence industry, to a vocal critic of whistleblower Edward Snowden, and to a former head of MI6 who oversaw the ‘sexed-up’ dossier that led to the Iraq War.

Now it’s reported that lawyers acting for Assange have asked the judge to recuse herself from the proceedings.

The Chief Magistrate, Lady Emma Arbuthnot, is presiding over the initial extradition proceedings of Assange. She presided over a February 2018 application by Assange to cancel his arrest warrant. The application was denied and she followed up with a detailed explanation of her decision. However, Arbuthnot continues to rule on Assange matters.

Meanwhile, it appears that the US grand jury to which Chelsea Manning has been summoned is considering further charges against Assange:

DOJ said in a court filing Friday that Chelsea Manning's testimony is needed for an ongoing investigation into charges or targets not included in the superseding indictment unsealed last month against Julian Assange. pic.twitter.com/ofuMFZnB1R

Arbuthnot is married to Lord James Norwich Arbuthnot, a Conservative peer, known as Baron Arbuthnot of Edrom. Lord Arbuthnot was a Tory MP for 28 years and was chair of the Defence Select Committee between 2005 and 2014. He was elevated to the peerage in October 2015. He’s also a member of the advisory board of the Royal United Services Institute for Defence and Security Studies (RUSI). And he is chair of the advisory board of the UK division of multinational defence manufacturer Thales.

Lord Arbuthnot is also listed as a senior consultant to SC Strategy. Company records, however, show that Arbuthnot was a former director of SC Security, along with Lord Carlile and Sir John Scarlett, who remain as active directors.

According to the Guardian, in October 2013 Carlile argued that the publication of Edward Snowden’s revelations about mass surveillance “amounted to a criminal act”. Carlile oversaw UK anti-terrorism laws and subsequently took on the role of “independent reviewer of national security” in Northern Ireland.

He is also a vocal defender of MI5 and voted in favour of the ‘Snoopers’ Charter’, saying:

We have taken the view that if the head of the security service and the current Metropolitan police commissioner argue that these powers are needed urgently to retain communications data due to changes in technology, then we needed to act now rather than wait for reports that we do not know when they will be completed.

Recently, MI5 was forced to admit it misused that legislation and illegally retained files on millions of UK citizens.

As for Sir John Scarlett, he was the former head of MI6. He was on a panel of experts who oversaw a report that argued the security and intelligence agencies should retain powers to “collect bulk communications data”, again warned of by Snowden.

While chair of the government’s Joint Intelligence Committee (JIC), Scarlett was responsible for the compilation of the ‘dodgy dossier’ on Saddam Hussein’s WMD (Weapons of Mass Destruction), which paved the way for the Iraq War.

Judge refuses to recuse herself

UN Rapporteur on Torture Nils Melzer told US journalist Chris Hedges that Lady Arbuthnot “has a strong conflict of interest” and that  “her husband had been exposed by WikiLeaks”. Hedges adds that Assange’s lawyers have asked the judge “to recuse herself”, but that “she has refused”.

However, Lady Arbuthnot was forced to recuse herself in August 2018 after an investigation by the Observer into her husband’s business dealings with Uber. The judge ruled in favour of Uber but stepped down from the case when it was shown that SC Strategy’s client the QIA had taken a stake in Uber.

And there are other precedents. For example, retired high court judge Lady Butler-Sloss was forced to resign as chair of the panel tasked with examining allegations of child abuse within institutions. This was after she admitted to a family conflict of interest (Sir Michael Havers, her brother, was attorney-general during the period when most of the alleged abuse occurred).

Given the evidence relating to her family background, it may be time for Lady Arbuthnot to recuse herself once more, and for the extradition proceedings to be halted.

Not just about Assange

The judge presiding over the pre-extradition hearings against Assange has family links, past and present, to people and organisations that are diametrically opposed to the publishing work of WikiLeaks. Such work included exposing war crimes committed during the Iraq War, and providing assistance to Edward Snowden when trying to escape US authorities

It should also be emphasised that hundreds of citizens face similar class bias via the justice system every single day. Likewise, thanks to cut-backs the prison conditions they experience, including lack of legal aid and poor access to lawyers and documents, is the norm.