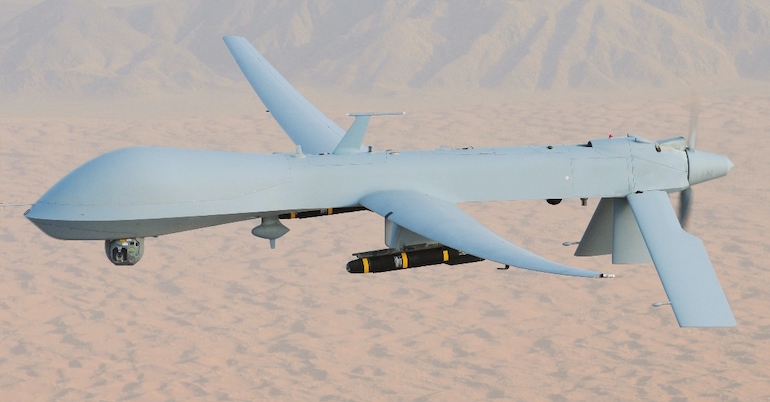 The second in a series of articles examining the latest government arms deals announcements.

From 10-13 September, London’s ExCeL Centre hosted arms companies from around the world. Defence Security and Equipment International (DSEI) is the world’s largest arms fair. As The Canary reported, for two weeks protesters took action to stop and disrupt DSEI. Yet, as journalist and historian Mark Curtis pointed out, while dealers met inside, the government slipped out four major arms trade announcements.

On 11 September, the government announced a contract worth “approximately” £100m for new drones. It stated:

The world-class Protector will be the first remotely controlled aircraft capable of attacking targets anywhere in [the] world while being operated from their home base in RAF [Royal Air Force] Waddington.

The government also stated that Protector:

As Curtis stressed, Protector will be “armed with” the same “missiles used” in the brutal Yemen war. In 2018, evidence emerged that since 2013, the UK sold:

The key ‘selling point’ of Protector is that it can fly for “up to 40 hours” and “operate in civilian airspace”. Several defence outlets reported this news as a DSEI ‘highlight’.

The UK government is working with US company General Atomics which is set to test and report on Protector. This isn’t the first RAF collaboration with General Atomics. In 2009, Flight International reported that the RAF used it’s Reaper drones in Afghanistan. These carried:

“Blurring the line between war and peace”

As the BBC noted:

The first combat use of an armed drone came in October 2001, on the first night of the Afghan War against a Taliban convoy. …

Using UAVs to strike at targets has helped to open up a new kind of combat, blurring the line between war and peace.

The US and Israel led the way in the use of armed drones, also known as unmanned aerial vehicles (UAVs). China followed. Following 9/11, the US was the first “country to kill people with missiles launched from drones”. The UK seems keen to push further forward as a world-leader in this technology. Globally, the drone industry’s now worth $127bn.

Authoritarian countries around the world are increasingly violating international law using these drones. The Intercept reported:

The U.K., Israel, Pakistan, Saudi Arabia, the UAE, Egypt, Nigeria, and Turkey have all used armed UAVs to kill targets since 2015. …

Meanwhile, the U.S. has set a precedent of impunity by carrying out hundreds of strikes that have killed civilians over the last decade.

Because Turkey can’t buy drones from the US, it builds them. It uses these on “Kurdish targets both inside Turkey and in Syria”. Since 2016, drone strikes killed over a thousand people, including civilians, in predominantly Kurdish areas.

Noel Sharkey from Campaign to Stop Killer Robots also told the Telegraph that some countries use “drones equipped with pepper spray and plastic ball ammunition” to ‘bust strikes’ and ‘break up protests’.

In 2018, Israel did exactly this. As people in Gaza protested against Donald Trump opening the Israeli embassy in Jerusalem, Israel launched “drones to unleash lung-burning tear gas on demonstrators”. And as War on Want also reported, this isn’t a new strategy. In 2012:

Israeli drones constantly circled the skies over Gaza launching hundreds of missiles. Despite Israel’s violations of international law and Palestinian human rights, the British government is importing Israel’s drone technologies to be integrated into its armed forces.

The UK government has been working with Israel on UAV technology since 2005 in a deal worth at least £1bn. The Ministry of Defence (MoD) signed a contract with UAV Tactical Systems Ltd (U-TacS). This is a “joint venture” between UK-based Thales and Israeli arms company Elbit Systems. As The Canary reported, Elbit has links with Turkish arms company Aselsan.

Who is our government working with?

one of America’s foremost policy research centers… a leader in innovative thinking and creative solutions to the challenges of the present and the future.

Kissinger supported military dictatorships across Latin America in the 1970s. He also executed Richard Nixon’s bombing campaign in Cambodia, a war that claimed millions of lives. As WikiLeaks revealed, in 1975 he also said:

The illegal we do immediately; the unconstitutional takes a little longer.

Trump met with Kissinger in December 2016, shortly after his election victory. Under Trump’s presidency, drone strikes are soaring.

We are well past the time when the proliferation of armed drones can in any way be controlled.

The UK’s latest venture only adds to this. Where the UK, US, and Israel lead with drone technology, other countries follow. Drones kill. The arms trade kills. And together we need to stop it.