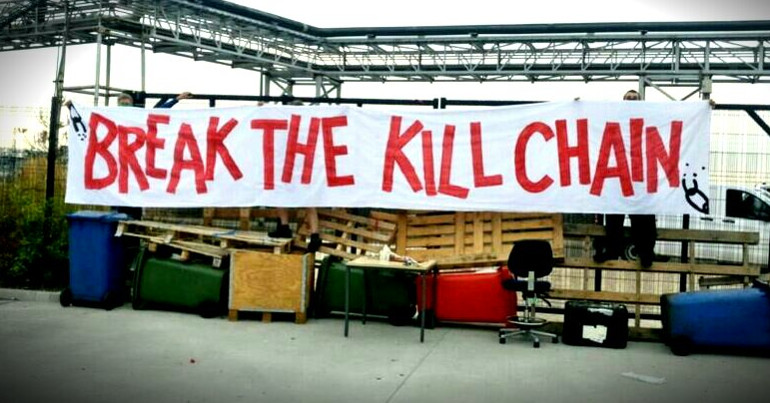 Turkey’s increasingly dictatorial president Recep Tayyip Erdoğan is more than happy to make statements in solidarity with Palestine. But activists have discovered that an arms company that he indirectly controls is doing business with Israel’s largest private weapons manufacturer.

On 27 August, anti-militarist protesters from Stop Elbit breached the security and occupied Instro Precision, an arms company in Kent owned by Israel’s Elbit Systems. All entrances in and out of the factory were blockaded, effectively preventing the company from making weapons for two days.

During the occupation, a number of packages were discovered with the logo of Turkish arms company Aselsan. Stop Elbit says this means that Israeli-owned Instro is developing weaponry and/or working with Turkey.

The Canary was present at the occupation and spoke to the activists who passed on the photos: 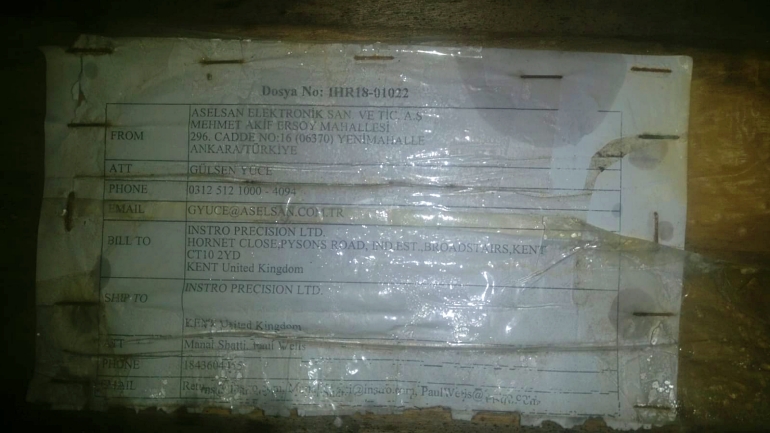 We could see two Aselsan boxes. One was inside their factory, and looked unopened, and the other was outside in a pile of rubbish. The box outside was addressed to Instro’s old factory, proving that the relationship between the two companies is a long-term arrangement. One of the boxes was marked ‘CAUTION: SENSITIVE ELECTRONIC DEVICES’.

Turkish president Erdoğan consistently uses the Palestinian struggle as propaganda to promote his image as a strong anti-colonialist leader. He regularly uses social media to criticise Israel and its leader Benjamin Netanyahu, whilst continuing his own fascistic policies against the Kurdish populations of Turkey and Rojava, northern Syria. Netanyahu, meanwhile, continues to insult Erdoğan and Turkey. But the cooperation between Instro and Aselsan proves that it’s all just rhetoric. Money speaks louder than words.

The trade relationship between Aselsan and Instro-Elbit further undermines any pretence of a military ‘embargo’ between Israel and Turkey.

For all the vitriolic public grandstanding between Netanyahu and Erdoğan, when it comes to the trade in arms they clearly remain as thick as thieves. Little wonder, since both are perpetrators of imperialistic and highly-militarised genocidal faux-democracies.

Instro’s Kent factory makes target acquisitions systems which detect the position of a person or target that the military wants to annihilate. These systems are used to fire heavy mortar and artillery shells. Its parent company, the Israeli giant Elbit, makes roughly 85% of the drones used by Israel. Residents of Gaza are regularly terrorised by drone strikes. Corporate Watch researchers have stated that:

The Canary was told that until recently, Instro stated on its website that its equipment supplied drones. However, this information was removed after campaigners started targeting the company.

Instro also makes border security surveillance systems. This includes thermal imaging to detect movement at night. And as Corporate Watch reported, its parent company Elbit is “one of the main providers of the electronic fence system of the apartheid wall” strangling the West Bank. Elbit also provides equipment for the Gaza wall.

Turkish arms company Aselsan, meanwhile, is majority-owned by the Turkish Armed Forces Federation whose chair is Turkish president Erdoğan. Aselsan’s board members have a number of links to the repressive ruling AK Party.

Aselsan, Instro, and Elbit will all be showing off their weaponry at this year’s Defence Security and Equipment International (DSEI) weapons exhibition in London, which will take place from 10-13 September. Elbit advertises its wares as “battle-proven”. As a spokesperson for Disarm DSEI previously told The Canary, this means “weapons have been tested on the bodies of Palestinians”.

Israeli firm Elbit Systems say it will display a range of new and battle-proven systems. https://t.co/1ZKLsRaE51

Protests against the arms fair are currently taking place, with activists blockading the roads to try to prevent weapons from arriving.

DSEI is where weapons are bought and sold. Arms deals are made here in London, and it’s down to all of us to stop it.

The Canary contacted Instro for comment but had not received a reply at the time of publication.