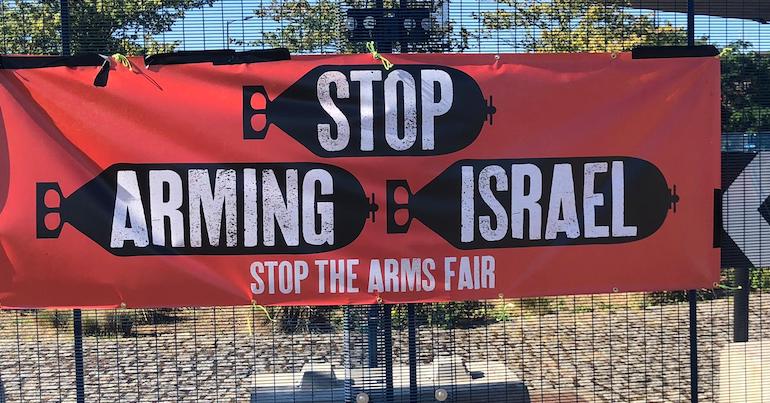 A week of action has started in London to stop the “world’s largest arms fair”.

The Defence and Security Equipment International (DSEI) arms fair returns to London between 10 and 13 September. Israeli arms companies will attend DSEI, displaying “weapons that have been tested and used to devastate and destroy Palestinian communities”.

2 September is Stop Arming Israel day, when activists focus on its “brutal military occupation of Palestine”.

Israeli arms companies will display weapons “marketed as ‘combat-proven’” at DSEI. Weapons and technology will be on display in the UK that have been actively used against Palestinian people, including children.

A spokesperson for Disarm DSEI told The Canary:

Palestinian children are being killed by weapons sold at DSEI. We’re here at Stop Arming Israel day because Israel is sending state and military personnel to show weapons next week. At the same time arms companies – whose weapons have been tested on the bodies of Palestinians – will be looking to use that experience to make an even bigger profit.

For over a year in Gaza, people have been demonstrating at Israel’s apartheid wall enclosing the Gaza strip. Every week Palestinians are shot dead by Israel’s snipers using bullets, rifles and gun sights made by companies exhibiting here next week. Palestinian calls to justice are ignored by politicians worldwide so Palestinians are calling on ordinary people to take direct action against the companies profiting from their suffering. So we’re here to stop the setting up of this arms fair.

War on Want, one of the groups involved in the action, noted:

The UK government is complicit in Israel’s continuing violations of human rights and international law. By purchasing arms from and selling arms to Israel, the UK government is giving direct material support for Israel’s aggression and sending a clear message of approval for its actions.

In March 2018, Palestinian people began the Great Return March. In the year that followed, at least 250 protesters were killed, including unarmed journalists, medics, and children. And an estimated 29,000 people were injured during the same period. Jewish Voice for Peace wrote in March 2019:

A recent investigation by the UN Human Rights Council determined that Israel Intentionally Shot Children and Journalists in Gaza in 2018, and that the Israeli military may have committed crimes against humanity in its shoot-to-kill response to the Great March of Return mass protests.

This violence and destruction is made possible by Israel’s trade in arms with dozens of countries, including the UK.

Alongside alleged Israeli war crimes and ethnic cleansing in the occupied West Bank, people in Gaza continue to live in what many observers describe as an open air prison. It’s also a place where water pollution is a “leading cause of child mortality”. And in 2018, the UN said Gaza was facing “an unprecedented humanitarian crisis, caused by over 10 years of Israeli blockade”.

Protesters will take action at DSEI to challenge the UK government and “international corporations that profit from the occupation” of Palestine.

One attendee told The Canary:

This is my first time at DSEI, I am visiting from the Channel Islands. Following serving as a Human Rights Monitor in Hebron last year and witnessing what the brutal Israeli military occupation and apartheid looks like on the ground for Palestinians, I felt compelled to take part in the ‘Stop Arming Israel’ day. I also feel morally obligated given I am aware that Israeli money is invested in our islands.

We call on everyone to take direct action to shut down the arms fair before it even starts.