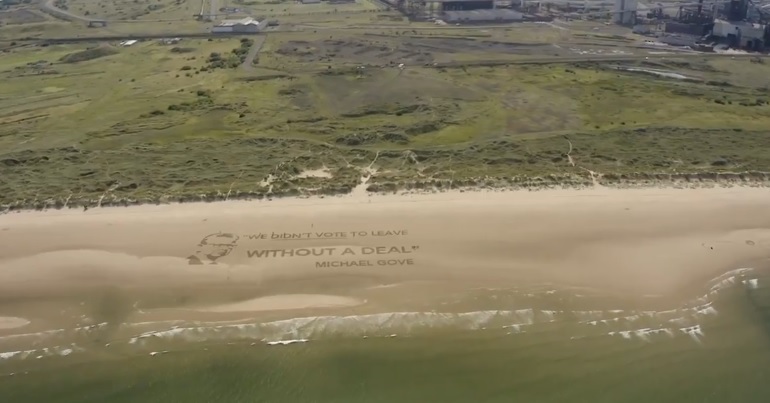 The UK government is effectively now telling its citizens that a no-deal Brexit will be a piece of cake. The country’s horizon after any no-deal exit from Europe will be hunky dory, according to ministers. But as one campaign group has pointed out, that’s not the message they’ve always tried to sell to the public. And the group just made sure that hypocrisy is “visible from space”.

The group Led By Donkeys is known for outing politicians for their double-dealing by plastering quotes from them on billboards. It’s also used projections for a few of its exposes:

Hey @realDonaldTrump, you just endorsed your Brexit buddy @BorisJohnson but he said some VERY NASTY things about you and he doesn’t want you to know. So we projected his words onto Big Ben. Watch with the SOUND ON #TrumpUKVisit pic.twitter.com/etUb6tk9eX

Most recently, the group has turned its sights on the prospect of a no-deal Brexit. In particular, it’s making sure people across Britain know what Tory politicians used to say about the impact of such a scenario (before they were trying to persuade citizens that it’ll be a breeze).

Just a reminder that Boris Johnson’s own Defence Secretary thinks a No Deal Brexit will make us all less safe pic.twitter.com/a0s7yaTOrn

Here’s what another of @BorisJohnson’s cabinet ministers said about a No Deal Brexit. Reckon Johnson won’t put this in his £100m Brexit propaganda splurge so we did it for him. (Chip in for more: https://t.co/GyH03Oa075 location: Coventry) pic.twitter.com/uA7u7QhZRm

On 1 September, however, it went above and beyond. Led by Donkeys travelled to the North Yorkshire coast and drew a 7,500 sq metres quote by Michael Gove in the sand. The quote by the minister overseeing preparations for a no-deal Brexit, which the group says can “be seen from space”, reads:

We didn’t vote to leave without a deal

Hey Vote Leave leader @MichaelGove, remember in March you admitted there’s no mandate for No Deal cos nobody voted for it in the 2016 referendum? We thought we’d remind the country via a 7500sq/m sand installation on Redcar beach that can be seen from space. You’re welcome. pic.twitter.com/hWcLvwFRxA

Explaining the reasoning behind the sand drawing, Led By Donkeys’ Will Rose told the Guardian:

The government is claiming the 2016 referendum gives it a mandate to crash us out of the EU without a deal, but that’s nonsense

There are a number of Britons who couldn’t give two hoots about whether the UK leaves the EU with or without a deal, as long as it leaves. But there are also many people who do think ‘no deal’ will be bad for the country. In fact, a recent poll showed that more people in Boris Johnson’s own constituency think no deal will be bad than good for the country. The poll, commissioned by HOPE not hate, found that 42% of his constituents opposed no deal, with 27% for it.

Regardless, the government does appear determined to risk a no-deal Brexit, even though parties to it used to warn about the grave danger of doing so. A rank hypocrisy that has now apparently been projected into space.