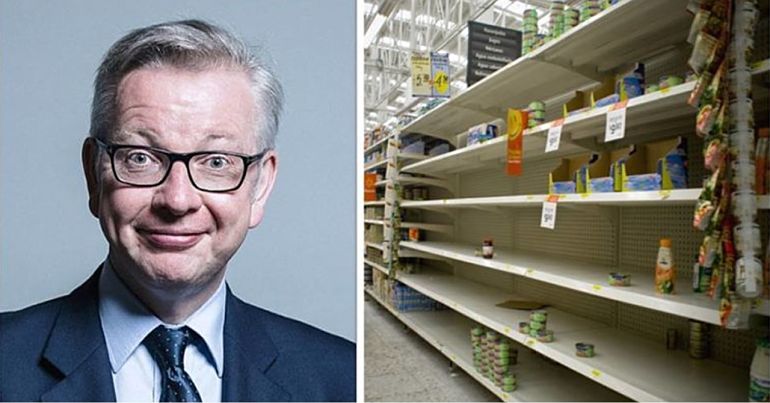 Michael Gove, the cabinet minister responsible for leading the government’s preparations for a no-deal Brexit, appeared on The Andrew Marr Show on 1 September. He was there to discuss the proroguing of parliament and the possible effects of a no-deal. And his comments emphasise why this government needs to be ousted immediately.

In addition to not clearly answering whether the government would abide by legislation passed by both houses of parliament, Gove made some alarming comments about food shortages. So it was left to the experts to put him straight on the realities.

Marr asked Gove about possible food shortages in the UK in the event of the UK leaving the EU without a deal. Marr asked:

Are you absolutely sure that there’ll be no shortages of fresh food in this country as a result of no-deal?

Everyone will have the food they need.

I’m saying, ‘will there be shortages?’ and you’re saying, ‘yes, there will be’.

No. There will be no shortages of fresh food.

Quite simply, it isn’t true

Soon after Gove’s appearance on Marr, the British Retail Consortium (BRC) said it had already spoken to the government about food shortages. And it had been “crystal clear” in telling the government that “the availability of fresh foods will be impacted as a result of checks and delays at the border”.

This is very serious

The BRC went on to say it’s “impossible to mitigate it fully as neither retailers nor consumers can stockpile fresh foods”. Furthermore, it had stressed the importance of this to government ministers on a number of occasions. The BRC said if a no-deal Brexit were to be the outcome it would be “the worst of all worlds for our high streets and those who shop there”.

The BRC re-emphasised its position, saying:

It is categorically untrue that the supply of fresh food will be unaffected under a no-deal Brexit.

The BRC pointed out that:

Retailers will be preparing for Christmas, stretching already limited warehousing capacity, and the UK will be importing the majority of its fresh food from the EU, magnifying the impact of border delays.

Use of language and food prices

And Gove’s use of the word “need” in the Marr interview is telling. He said:

Everyone will have the food they need

Because the government’s own report ‘Operation Yellowhammer’, which examined the consequences of the UK leaving the EU without a deal, said:

The supply of certain types of fresh food will decrease. Critical elements of the food supply chain (such as ingredients, chemicals and packaging) may be in short supply.

So we can only speculate as to what Gove means by “need”.

Where does this leave us?

Gove’s performance on Marr is in keeping with the nonsense and bluster British people have had to tolerate from this Tory government – a government that seems intent on ignoring the law and is undisturbed by possible food shortages. It’s clear it isn’t looking after the interests of the majority. So this week and in the weeks ahead, people need to be vocal, stand against Johnson’s coup, and ensure we finally get a government we can trust.