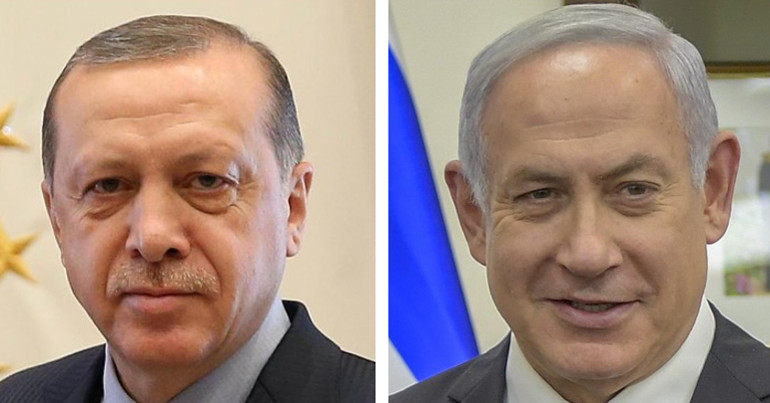 Turkish president Recep Tayyip Erdoğan and Israeli prime minister Benjamin Netanyahu continue their familiar feud, using social media and public speeches to blast each other. Meanwhile, #WeAreErdoğan trends on Twitter, as thousands of people claim to stand with the authoritarian Turkish president, while at the same time supporting Palestinians in their struggle.

For years, Erdoğan has used the occupation of Palestine as a propaganda tool to increase his popularity and to mobilise grassroots Muslim supporters. It’s no coincidence that Erdoğan took the opportunity to insult Netanyahu at an election campaign rally this week.

Portraying himself as an anti-colonialist with decent moral values, Erdoğan succeeds at his task of winning over supporters. Turkish flags can be seen in some houses and shops in the West Bank, while Palestine solidarity activists retweet Turkish state propaganda.

In 2017, US congresswoman Ilhan Omar tweeted about meeting with the Turkish president. While in 2018, Rachel Corrie’s parents accepted an award from Erdoğan on behalf of their daughter. Corrie was murdered in Gaza in 2003 by the Israeli military. At the ceremony, her parents thanked Turkey and stated that “world citizens needed to reject destructive nationalism and racism more than ever.”

Palestine solidarity activist Benjamin Ladraa, who inspired lots of us when he walked from Sweden to Palestine, attended the same awards ceremony in Istanbul, meeting the dictatorial president and his wife.

These meetings occurred after Turkey, under the leadership of Erdoğan, committed the biggest massacre of its Kurdish population since the 1990s, displacing thousands and killing hundreds, including children. Meanwhile this week, Erdoğan called Netanyahu a “tyrant who slaughters 7-year-old Palestinian kids.”

So, let’s look at the similarities between Erdoğan and Netanyahu and the countries they’re leading.

Between 2009 and 2019, Israeli occupation forces murdered 3396 Palestinians, of whom 774 were children. Despite this, Netanyahu had the audacity this week to tweet in reply to Erdoğan:

It’s best that he doesn’t get involved with Jerusalem, our capital for 3,000 years. Erdogan can only learn from us how to respect every religion and protect human rights.

Similarly, Turkey has killed hundreds of its Kurdish citizens since 2015, including 176 people who were murdered when they were trapped in basements in the city of Cizre in early 2016. Many of them, including children, were burnt alive by Turkish soldiers. The government branded all those killed as “terrorists”.

In 2018, the Israeli occupation demolished 460 Palestinian structures, displacing people who had nowhere else to live. The state continues to ethnically cleanse Palestinian areas in its relentless pursuit of Zionist expansion. As armed forces bulldoze homes, villages are in danger of disappearing completely off the map. So far in 2019, demolitions continue on an almost daily basis.

In Turkey, between 2015 and 2016, armed forces displaced around 500,000 majority-Kurdish people as they terrorised and flattened whole neighbourhoods in Kurdish cities. Many of these people were not able to return to their homes. Turkey has also ethnically cleansed and currently occupies the majority-Kurdish region of Afrin in Syria.

Erdogan, the dictator who sends tens of thousands of political opponents to prison, commits genocide against the Kurds, and occupies Northern Cyprus, preaches to me, to Israel, and to the Israel Defense Forces, about democracy and the ethics of war. A joke.

Indeed, Turkey imprisons and tortures political opponents, and is the number one country in the world for imprisoning journalists critical of the government.

But Israel, too, continues to imprison Palestinian citizens. There are currently 5,440 political prisoners languishing in Israeli jails, including 209 child prisoners. 493 prisoners are serving sentences of more than 20 years.

As Netanyahu talks nonsense on social media about protecting human rights, the Israeli state continues to target and punish those who attempt to document its crimes against Palestinians. The international observation group, Temporary International Presence in Hebron (TIPH), was permanently expelled from the West Bank in February 2019. At the same time, international group Ecumenical Accompaniment Programme Palestine Israel (EAPPI) was forced to leave Hebron due to Israeli settler harassment. The lack of international observers means that Israel can act with total impunity as its armed forces terrorise the streets of Hebron.

Meanwhile in Turkey, human rights defenders continue to be locked up and charged for ‘membership of a terrorist organisation‘, and international journalists are expelled under the same charge. In 2015, Turkish police murdered prominent human rights lawyer Tahir Elçi. He was shot in the head.

Both Israel and Turkey crack down heavily on protesters. There are numerous reports about the Israeli forces’ barbaric shooting of Palestinian protesters at Gaza’s Great March of Return. Israel frequently fires at demonstrators in the West Bank, too. The military uses live bullets, rubber-coated steel bullets and stun grenades on protesters, as well as drones to fire tear gas canisters at them.

Meanwhile, Turkish forces fire tear gas at mothers holding demonstrations for their children who were disappeared by the state. Turkish police fire rubber bullets and pepper spray at women demonstrating on International Women’s Day. And in 2013, much was written about police violence and the weaponry used during Istanbul’s Gezi Parkprotests.

Israel is the nation state of the Jewish people – and only it.

He too is hoping to rally support for the upcoming April election by stoking racism among citizens. His comment comes after the passing of Israel’s ‘nation-state’ law, which declares that ‘the right to exercise national self-determination in the State of Israel is unique to the Jewish people.’ The law also axes Arabic as an official language of Israel.

In Turkey, Kurdish has never been an official language, despite around 25 million Kurdish people living in the country. Turkey’s policy is to attempt to stamp out Kurdish culture and assimilate people into being ‘Turkish’. Those who won’t be assimilated face imprisonment.

In 2018, Human Rights Watch stated that Turkey’s attacks on Afrin “may be unlawful“. And the Permanent Peoples’ Tribunal found Turkey guilty of war crimes against the Kurdish people.

Similarly, in February 2019, the UN admitted that Israel’s murder of protesters in Gaza “may constitute war crimes.”

Despite these allegations, both countries continue to act with impunity, safe in the knowledge that western states need them as allies. And besides, there’s money to be made in selling both countries weapons.

So while both Netanyahu and Erdoğan yell virtual insults at each other, it’s important to remember that both leaders have blood on their hands. Don’t naively believe the pro-Palestine propaganda coming from Turkey’s power-hungry president. Stand in solidarity with both Kurdish and Palestinian peoples as they struggle against those who want to wipe them from existence.

Featured images via the Wikimedia Commons / US State Department