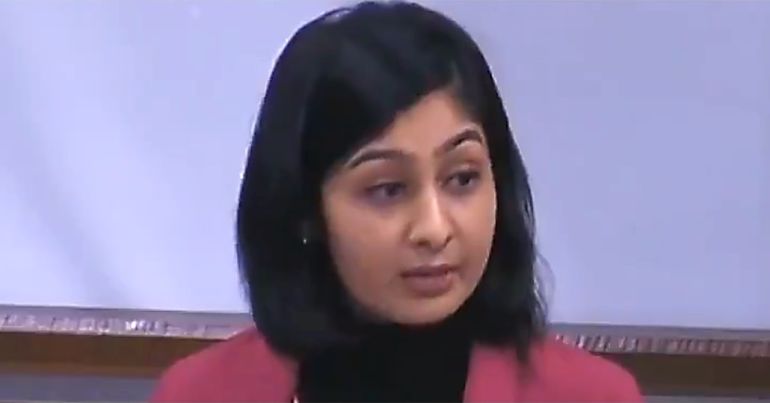 Now, faced with a room of Conservative MPs frothing at the mouth about Travellers and Gypsies, Sultana has calmly but forcefully reminded those members of their responsibilities and given them a lesson in how to be a representative of the people.

I know what it's like to be part of a scapegoated community.

That's why I can't stand-by as the Tories whip-up hate towards the Gypsy & Traveller community.

Conservative MP Philip Hollobone secured a Westminster Hall debate on 29 January to discuss the motion: “That this House has considered Gypsies, Travellers and the planning system.” Such debates don’t lead to a vote, but they give an opportunity to air topics that might not make it onto the main parliamentary timetable. This debate came in the wake of Conservative manifesto pledges to “tackle unauthorised traveller camps” and expand police powers.

Hollobone made it clear where he stood on the issue, saying: “The present policy regarding Travellers does not respect the interests of the settled community”. In fact he believes that currently: “Travellers effectively have preferential treatment within the planning system”. Labour MP Andy Slaughter disputed this, suggesting “there is discrimination against Gypsies and Travellers in the planning process”. He pointed out that when local authorities “take their responsibilities seriously”, the situation becomes much more straightforward. He was backed up by Labour colleague Lloyd Russell-Moyle, who said that Brighton had achieved positive results by expanding facilities for Gypsies and Travellers.

Labour’s Kate Green also rejected the idea that “the balance is currently in favour of the Traveller community”. And despite her smoothing words about the “tone” of the debate and the “restrained and thoughtful language” she said members had used, it was becoming clear that this was a partisan issue. Taking Hollobone’s side were shire Tories such as Andrew Selous, Elliot Colburn, Paul Beresford and Brexit bongs enthusiast Mark Francois. Their comments were peppered with anecdotes, loaded phrases and dog-whistle comments like Beresford’s “Travellers with a distinct Irish accent”.

Maybe Green was insulated by a layer of experience. Sultana came with fresh eyes. “This is my first Westminster Hall debate, so I came this morning with a little trepidation”, she began. And then she laid it out straight for her fellow MPs:

I have listened with alarm at what [Hollobone] and other Conservative Members have said. Gypsies and Traveller communities are not a problem that needs to be tackled, nor should legislation crack down on them. They are citizens entitled to equal treatment and the protection of their way of life. The dehumanising language we have heard should have no place in society or in the halls of power.

As with all types of bigotry, it comes from the top down—including, I am sad to say, from Members of this House, who have in the past compared Gypsies and Travellers to a ‘disease’ and a ‘plague’. Such scapegoating catches on.

When Beresford attempted to intervene, Sultana rebuffed him and pressed on into her conclusion:

I know what it's like to be part of a scapegoated community.

That's why I can't stand-by as the Tories whip-up hate towards the Gypsy & Traveller community.

She highlighted her own experience as a Muslim and showed what it really means to stand with oppressed people against power and privilege. She noted that Hollobone had previously called for banning the burqa. By linking attitudes towards Gypsies and Travellers into the wider context of racism, she echoed the words of an audience member on the BBC’s Question Time. In December 2019, the young woman described the Conservatives’ manifesto pledges on Travellers as “ethnic cleansing” and “the last ‘acceptable’ racism”.

Before resuming her seat, Sultana closed with a line that all MPs should staple to the insides of their eyelids:

We must all stand up to bigotry wherever we see it and recognise that our struggles are one and the same. There is safety in solidarity, which is more powerful and more beautiful than anyone’s hate.