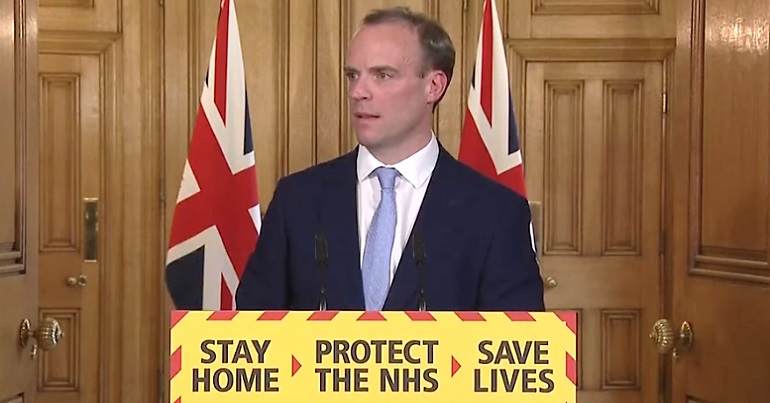 The Conservative government could be facing legal action over its coronavirus (Covid-19) daily briefings. This is because campaigners say that over 80,000 people are being unlawfully discriminated against during these public addresses.

Every day, the government gives a coronavirus briefing. Currently, various members of the cabinet are holding these. It’s because Boris Johnson was, at the time of writing, still in hospital having caught the illness. As The Canary‘s Emily Apple wrote on 8 April, so far there’s not been one woman from the cabinet leading the briefings. But there’s also another glaring omission from them.

In short, the government has not provided a British Sign Language (BSL) interpreter for any of its daily updates. It has been left to the media to provide interpreters. For example, BBC News has had a BSL interpreter during the live broadcast. It hasn’t been providing this on the iPlayer version, although subtitles are available. It has added it to the YouTube stream. But the Guardian (like other outlets) has been showing the updates on YouTube without BSL interpretation; and it hasn’t added subtitles after the livestream, either – although you can autogenerate subtitles yourself on YouTube.

A group of campaign groups and professional organisations are now taking matters into their own hands. They have launched a crowdfunder in a bid to take the government to court over its lack of BSL interpretation.

As the crowdfunding page says:

There are more than 80,000 Deaf people living in the United Kingdom for whom British Sign Language is their first language, before English. …

Starting with the #WhereIsTheInterpreter hashtag by Lynn Stewart-Taylor @jerseysnail, a variety of deaf individuals, organisations and charities across the UK sector have been asking that the Prime Minister’s office to provide a BSL English Interpreter live at televised national addresses during the COVID-19 crisis.

Without this essential support deaf people like 85-year-old ‘AK’ – who lives on his own and has no internet – had no idea about the emergency actions being taken until his daughter was able to tell him, days after the Prime Minister’s first address.

The lack of BSL interpretation is, as the campaign points out, posing a risk to people’s health and safety. Because some deaf people may be unaware of the government’s advice on things like, for example, social distancing. Despite the groups pushing the government for action, it has not done anything. So they are now planning legal action. They say they:

have engaged the legal team, Fry Law, who are supporting ‘AK’ by launching a Judicial Review application for breach of the Equality Act, Human Right Act and the UNCRPD [UN Conventions on the Rights of Persons with Disabilities], in the hope that the Court will order the government to provide an Interpreter.

As the coronavirus crisis continues, Deaf people across the UK are still not being provided with important public health information in BSL, cutting us out of an important conversation and placing lives at risk.

Over 87,000 people use BSL as their first language, and while BBC News has been providing interpretation of the briefings, it is the government who has a duty to make these briefings accessible under the Equality Act.

The Canary asked the Cabinet Office for comment. It directed us to Downing Street, which had not responded by the time of publication.

It may seem implausible that the government could make such an oversight. But the Tories have an appalling track record on protected groups’ human rights. So it is perhaps of little wonder that deaf people are not a priority to them.

The UK government must adhere to WHO guidelines and follow what other countries are already doing, which is to have an interpreter physically present and visible on camera alongside whoever is making the announcement, ensuring broadcasts are accessible from the start.

Unfortunately, the government still hasn’t listened to us, so we are now taking legal action.

We are asking members of the public to support our fundraiser on CrowdJustice, to ensure everyone receives the essential information in a time of great uncertainty.

It’s bad enough that the poorest people in the UK are suffering the most adverse effects of the pandemic. But when an already marginalised group cannot even access basic information about how to protect themselves, action is needed. And quickly.