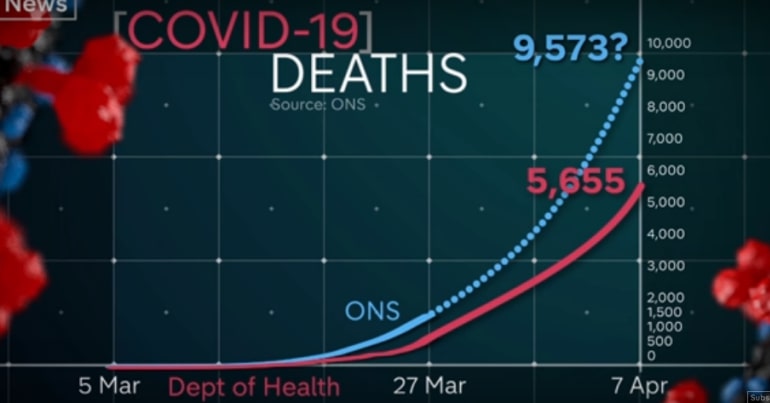 The number of deaths caused by coronavirus (Covid-19) is far greater than is being given out in the daily briefings, recent analysis shows. Many of these additional deaths are of older citizens.

How the coronavirus deaths figures are made available

The Office for National Statistics (ONS) produces figures that are for England and Wales only. It says they are “released every Tuesday at 9:30am and relate to the week that ended 11 days prior”. The Department of Health and Social Care (DHSC) also publishes figures. These are released daily and includes data submitted by “NHS England, Public Health Wales, Health Protection Scotland and Public Health Agency (Northern Ireland)”.

Apart from the frequency of publishing the figures and their geographic coverage, another difference is that, unlike the DHSC figures, the ONS figures include all deaths so far linked to Covid-19. It says:

The daily data provide a vital early indication of COVID-19 deaths that occur in hospitals after a positive test. The weekly deaths figures will include all deaths where the registration mentions COVID-19, including those occurring outside of hospitals (for example, in care homes).

In an update on coronavirus deaths, Channel 4 News explained why these two very different ways of calculating Covid-19 fatalities is significant, while emphasising that this is “no conspiracy”.

For example, the DHSC figure for deaths in hospitals in the UK up to 27 March was 926. Yet the corresponding ONS figure – for England and Wales only – was 1,568. For 7 April, the DHSC figure for the UK was 5,655. But based on previous ONS figures, Channel 4 News showed that the figure for deaths in that period could be around 9,573. And even that figure is too low, for the whole UK, as it excludes Scotland and the north of Ireland.

This chart compares ONS and DHSC numbers of deaths up to 27 March for England and Wales only:

But it’s not just the disparity regarding numbers of deaths. There is also the issue of clinicians having to effectively decide who should die. Integral to that decision is the procedure that involves a ‘Do Not Resuscitate’ order (DNR).

Here is an example of a recent letter about DNR that was sent by a GP surgery in Wales: 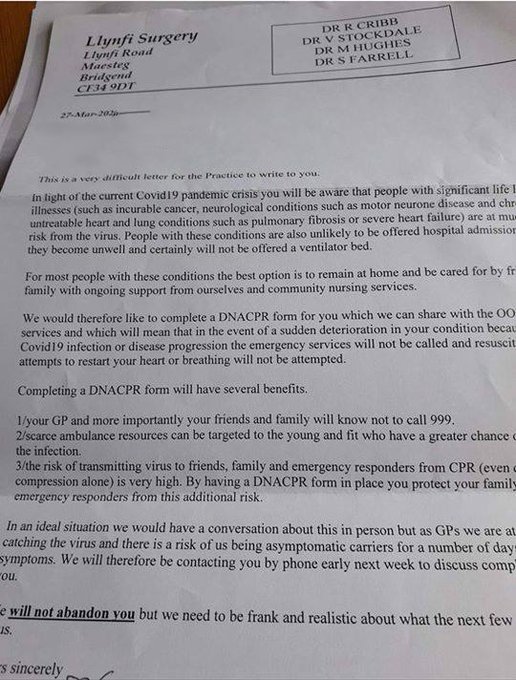 People with these conditions [incurable cancer, neurological conditions such as motor neurone disease and chronic untreatable heart and lung conditions such as pulmonary fibrosis or severe heart failure] are also unlikely to be offered hospital admission should they become unwell and certainly will not be offered a ventilator bed.

We would therefore like to complete a DNACPR form for you which we can share with the OOH [out-of-hours] GP services and which will mean in the event of a sudden deterioration in your condition because of Covid19 infection or disease progression the emergency services will not be called and resuscitation attempts to restart your heart or breathing will not be attempted.

BBC News also reported that one Clinical Commissioning Group (CCG) in Brighton and Hove wrote to GPs regarding guidance for dealing with Covid-19 in care homes for elderly people. The CCG suggested a script for GPs which read “We may therefore recommend that in the event of coronavirus infection, hospital admission is undesirable”.

The Guardian reported that a document issued by the British Medical Association (BMA) advises clinicians when to remove treatment from patients. In the document, the BMA explained:

The Canary previously reported on the shortage of ventilators and PPE (personal protective equipment), as well as the lack of widespread testing for the virus. This explains the BMA’s guidance on the rationing of care.

A Financial Times graph, published on 8 April and based on data from the European Centre for Disease Prevention and Control (ECDPC), indicates that in regard to coronavirus deaths the UK is on a steep trajectory: 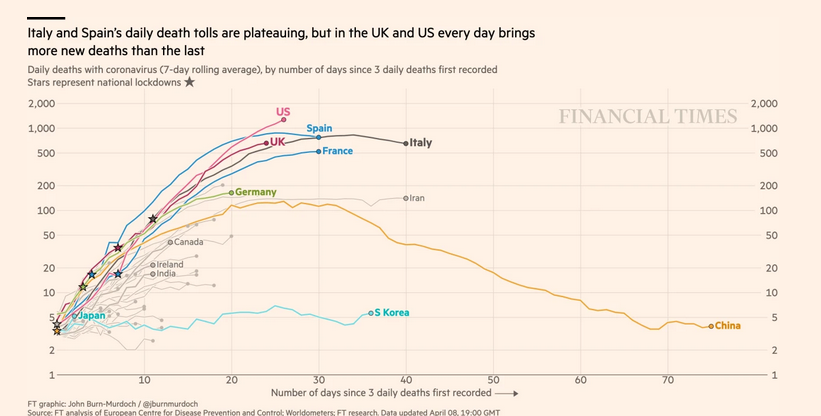 Of course this is not just about numbers. It’s about people – including older citizens and those who have serious underlying conditions. It’s also about the NHS workers who put their own lives on the line in the fight against the pandemic.