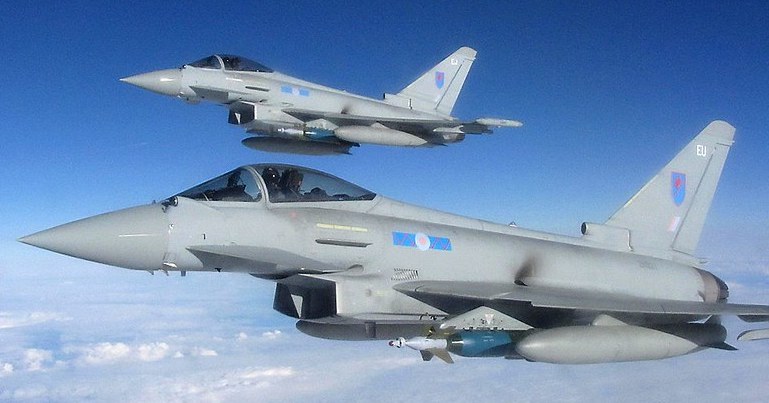 On 25 April, the Ministry of Defence (MoD) quietly announced that it had dropped bombs in Iraq on 10 April. Yet only one week before the bombings, foreign secretary Dominic Raab had announced UK support for a United Nations call for a global ceasefire during the coronavirus (Covid-19) pandemic.

“The fury of the virus illustrates the folly of war”

On 23 March, UN secretary-general António Guterres called for “an immediate global ceasefire in all corners of the world”. He said:

The virus does not care about ethnicity or nationality, faction or faith. It attacks all, relentlessly.

Meanwhile, armed conflict rages on around the world.

The most vulnerable — women and children, people with disabilities, the marginalized and the displaced — pay the highest price.

And those people, as Guterres noted, have “the highest risk of suffering devastating losses from” coronavirus. He continued:

Refugees and others displaced by violent conflict are doubly vulnerable.

The fury of the virus illustrates the folly of war…

End the sickness of war and fight the disease that is ravaging our world.

It starts by stopping the fighting everywhere. Now.

That is what our human family needs, now more than ever.

At the time of writing, over two million people have signed a petition supporting Guterres’s call.

On 3 April, Raab said the UK had also “joined” the call for a global ceasefire:

The world’s attention must be focussed on tackling #coronavirus. As @antonioguterres says, it is the fight of our lives and we must unite against it. That’s why the 🇬🇧 has joined the @UN call for an immediate global #ceasefire. https://t.co/7FDf8Cw0z7

However, on 25 April, an MoD announcement stated:

On Friday 10 April, [a] patrol conducted air strikes in support of a counter-terrorism operation in northern Iraq.

The pair of Typhoons, assisted by an RAF Reaper aircraft, identified Daesh [Isis/Isil] terrorists occupying a group of fortified buildings in an isolated location west of Tuz Khurma, known to be inhabited by active terrorist commanders and fighters.

A press release from the Peace Pledge Union (PPU) noted that this was “the first known act of aerial bombing by UK troops for seven months”. PPU campaigns manager Symon Hill said:

On 3rd April, Dominic Raab was tweeting about his enthusiasm for a global ceasefire during the pandemic. A week later, with Johnson in hospital and Raab in charge, the RAF was dropping bombs in Iraq. More than two weeks after the bombing took place, the government have quietly posted some vague information online at the weekend.

The PPU accused the government of “hiding from scrutiny” amid the coronavirus crisis. Hill said:

Ministers and military bosses must not be allowed to misuse the Covid 19 crisis to avoid scrutiny. They have urgent questions to answer. Why has this bombing taken place now? Did military leaders consult the government about it? Did Raab know about it when he was claiming to support a global ceasefire? We need details of the incident and realistic information about casualties, including civilians.

“In the last two decades,” Hill continued, “events in Iraq have made very clear that violence cannot solve deep-seated problems, whoever engages in it”.

On 2 April, the UN noted that:

The situation in Iraq remains fragile. Prime Minister-designate Adnan al-Zurfi recently announced that Iraq will play a serious role in defusing geopolitical tensions in the region; highlighting the devastating humanitarian implications of COVID-19, he called on the international community to provide support.

The UN said it was working “with all political actors” in the country. Muqtada al-Sadr, an Iraqi Shia cleric and politician, caused outrage by trying to link the pandemic to same-sex marriage. However, according to the UN, he also made a “significant” call for the:

cessation of all sectarian violence in Iraq as well as an end to wars in Syria, Yemen, Libya and elsewhere… He joins other Iraqi leaders calling for domestic and international unity to combat the disease.

At the time of writing, Iraq had 1,820 cases and had recorded 87 deaths from coronavirus. However, it’s difficult to establish the full extent of the crisis. On 3 April, Iraq banned Reuters after a report said “the number of deaths was much higher than publicly reported, and that Baghdad was concealing data from the public”.

UK in the Middle East

Although the MoD justified this particular bombing attack to target Daesh terrorists, the UK can’t overlook its role in causing instability in the region. The 2003 invasion of Iraq sparked a conflict that killed many hundreds of thousands of people. The Chilcot inquiry concluded that it was unnecessary. Both the US and the UK, meanwhile, knew that it could lead to a rise in terrorism – as it did.

According to the MoD, after weapons struck targets, “there was no collateral damage”. But PPU noted that it’s “almost impossible to believe” that there “were no civilian casualties”. This is because of “the inaccuracy of so many similar claims in the past”. In 2017, for example, the MoD claimed that the RAF had killed over 3,000 Daesh fighters since the bombings began, but had “no credible evidence” of civilian casualties. Kate Allan of Amnesty International UK said that this claim about civilian deaths “frankly stretches credulity to breaking point”. MP Clive Lewis, then chair of the All-Party Parliamentary Group on Drones, accused the MoD of “a lack of clarity regarding the legal criteria by which the MoD determines an individual to be an ISIS combatant”.

Civilians, meanwhile, continue to die around the world. Action On Armed Violence (AOAV) records information about deaths and injuries from “incidents of explosive violence”. Between 2011 and 2019, it found that “when explosive weapons were used in populated areas”, 90% of deaths and injuries were civilian.

Responding to AOAV’s 2018 report, showing a 42% rise in civilian deaths from the previous year, the MoD said: “We’ve not seen any evidence that we have caused civilian casualties”.

The Ministry of Defence expect us to live in a fantasy world in which British bombs only ever kill terrorists and never civilians. We’re sure that most of the British public are not naive enough to believe such nonsense, which flies in the face of years of careful and cautious research by independent monitors of civilian deaths. In Iraq, as in most wars, the people who are least to blame are the people who suffer the most. You can’t solve deep-rooted problems with bombs.

Britain’s adversaries have not let Covid-19 stop them posing a risk to our citizens and allies. It is for that reason that Defence continues to take whatever steps are necessary – at home and abroad – to keep the nation safe.

The use of  RAF jets and a Reaper aircraft to deliver a successful strike against Daesh terrorists and their hide out demonstrates that the UK’s Defence never sleeps and will always do what is necessary to protect our people.

Guterres is absolutely right in pointing out that the global pandemic exposes the “folly of war”. But the British government backing his call for a global ceasefire while dropping bombs suggests it hasn’t truly bought into his message. It also shows the kind of sickening hypocrisy we’ve sadly become all too used to.