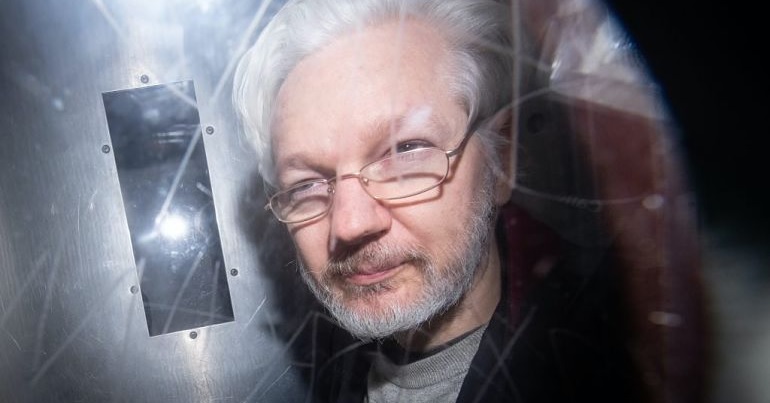 The next stage of Julian Assange’s extradition hearing may be delayed until November, a court has heard. The delay in his case comes as signatories to an international journalist statement in support of Assange grows to nearly 1,500.

The US government is attempting to extradite WikiLeaks founder Assange over publishing of leaked defence cables a decade ago. As award-winning journalist, author and filmmaker John Pilger wrote in The Canary:

The current US charges against Assange centre on the Afghan Logs and Iraq Logs, which the Guardian published and [former Guardian investigations editor, David] Leigh worked on, and on the Collateral Murder video showing an American helicopter crew gunning down civilians and celebrating the crime. For this journalism, Assange faces 17 charges of “espionage” which carry prison sentences totalling 175 years.

But the publisher’s lawyers said they have been unable to take instruction from their client since the coronavirus (Covid-19) outbreak.

In a 50-minute hearing at Westminster Magistrates’ Court on 27 April, during which journalists listening into proceedings via a telephone line complained frequently of not being able to hear counsel speaking, Assange’s lawyer Edward Fitzgerald QC said there had been no “direct access” with his client for “more than a month”. Fitzgerald said:

There have always been great difficulties in getting access to Mr Assange. But with the coronavirus outbreak, the preparation of this case cannot be possible.

District judge Vanessa Baraitser agreed to vacate the date for the next stage of the extradition, originally due to take place on 18 May. A date for the resumption of the case will be fixed during an administrative hearing on 4 May. But the judge warned that the next three-week time slot for the hearing to take place was not until November.

Assange is in Belmarsh prison after the Ecuadorian embassy allowed the UK police to enter and drag him out a year ago. The police swiftly arrested Assange in relation to the US extradition warrant. Ecuador had previously been providing the publisher political asylum. Ex-president of Ecuador Rafael Correa commented on his successor’s decision to withdraw asylum and cooperate with the UK authorities:

Journalists around the world have signed a statement in support of Assange and against the US extradition attempt. The statement, signed by 1,465 journalism professionals so far, states:

Julian Assange has made an outstanding contribution to public interest journalism, transparency and government accountability around the world. He is being singled out and prosecuted for publishing information that should never have been withheld from the public.

It also warns of the dangerous precedent a successful extradition of Assange would set:

This case stands at the heart of the principle of free speech. If the US government can prosecute Mr Assange for publishing classified documents, it may clear the way for governments to prosecute journalists anywhere, an alarming precedent for freedom of the press worldwide. Also, the use of espionage charges against people publishing materials provided by whistleblowers is a first and should alarm every journalist and publisher.

In a democracy, journalists can reveal war crimes and cases of torture and abuse without having to go to jail. It is the very role of the press in a democracy. If governments can use espionage laws against journalists and publishers, they are deprived of their most important and traditional defense – of acting in the public interest – which does not apply under the Espionage Act.