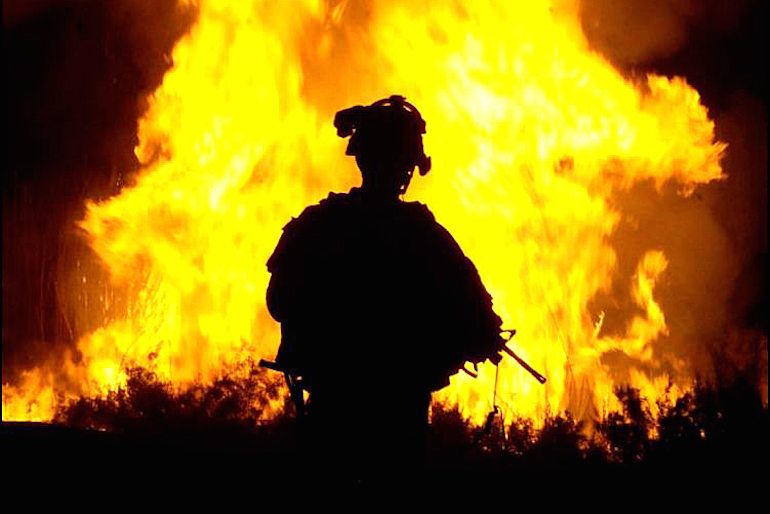 We were told long ago that the “war on terror” would make the world a safer place. But after 14 years of permanent warfare, terrorist attacks around the world have escalated by a staggering 6,500%.

If its objective was to end terrorism, the “war on terror” has abjectly failed. Since it was launched in 2001, terror attacks – and the number of people killed by them – have sky-rocketed: 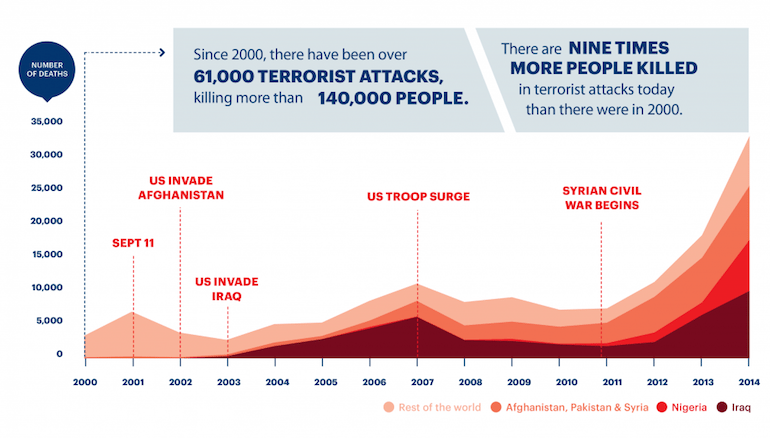 The above image comes from the Global Terrorism Index 2015, published by the Institute for Economics and Peace. The same index notes that 78% of all deaths from terrorism last year took place in just five countries: Iraq, Afghanistan, Nigeria, Pakistan and Syria.

Iraq takes first place in the index, with a shocking 9,929 terrorist fatalities in 2014 – the highest ever recorded in any country. The chart below (based on figures from the index) clearly shows the surge in terrorist attacks in Iraq starting soon after the 2003 invasion: 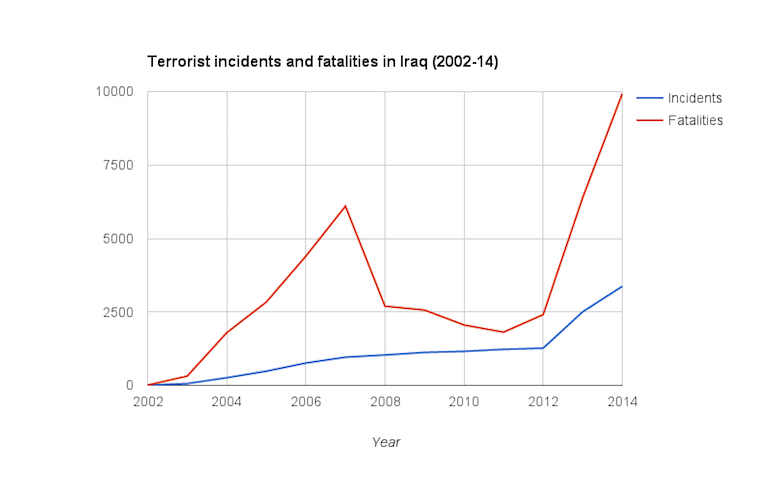 In second place is Afghanistan, which became the first target of the “war on terror” when Operation Enduring Freedom was launched a few weeks after 9/11. One of the aims of the operation was to stop Afghanistan from becoming a terrorist haven. Instead, the 14-year intervention has overseen an increase in terrorist incidents of more than 5,000%, from 30 in 2002 to 1591 in 2014: 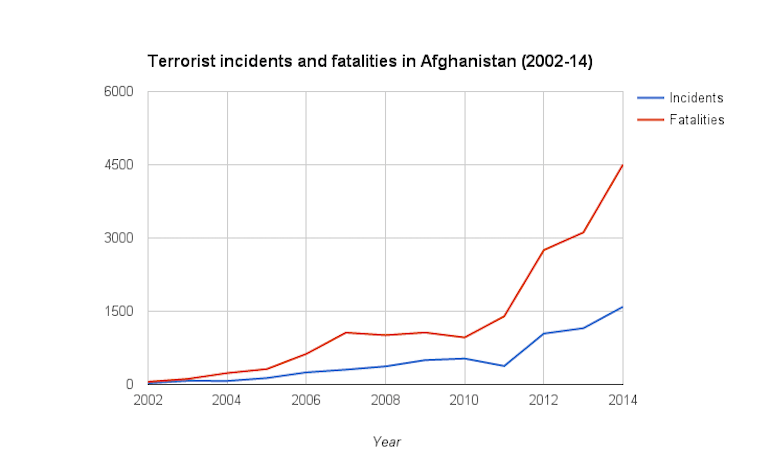 With a year-on-year increase of more than 300% in terrorist fatalities, Nigeria comes third in the index. Together, Boko Haram and ISIL were responsible for just over half of all claimed global terrorism fatalities in 2014: 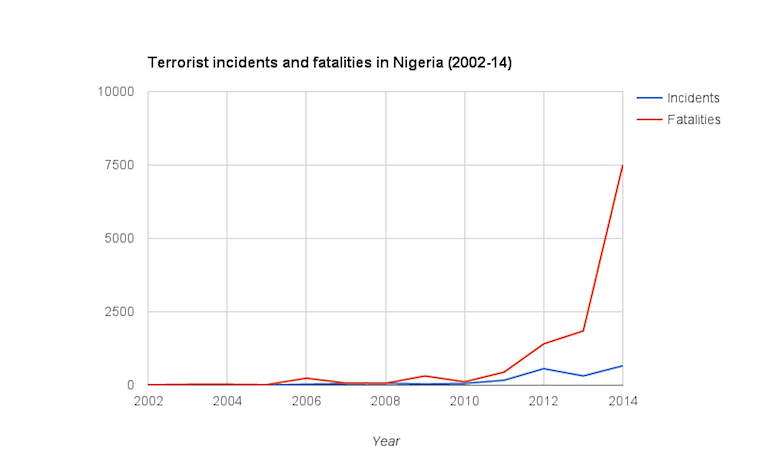 Pakistan has seen an increase in terror attacks of more than 4,000% since 2002. Mehdi Hasan notes that, in the 14 years before 9/11, there was just one suicide attack on Pakistani soil – in the 14 years since, there have been 486 suicide bombings, killing more than 6,000 people. 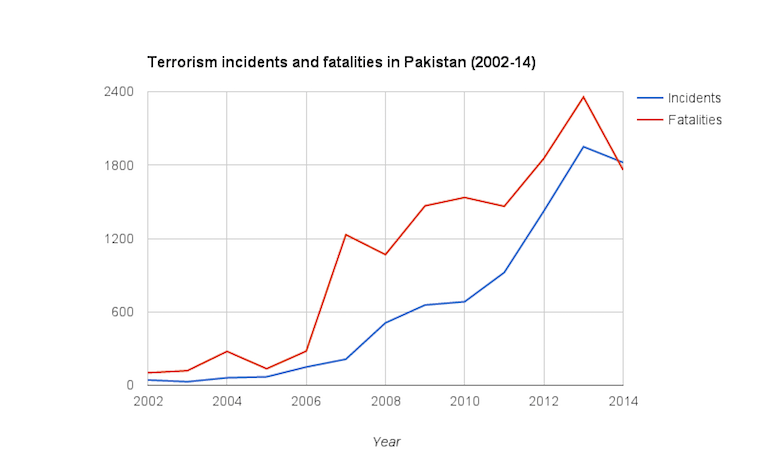 Syria’s civil war began in 2011, which is made clearly visible by the graph. What is not yet clear is whether – and how – the year of coalition air strikes will affect the numbers of terrorist incidents. 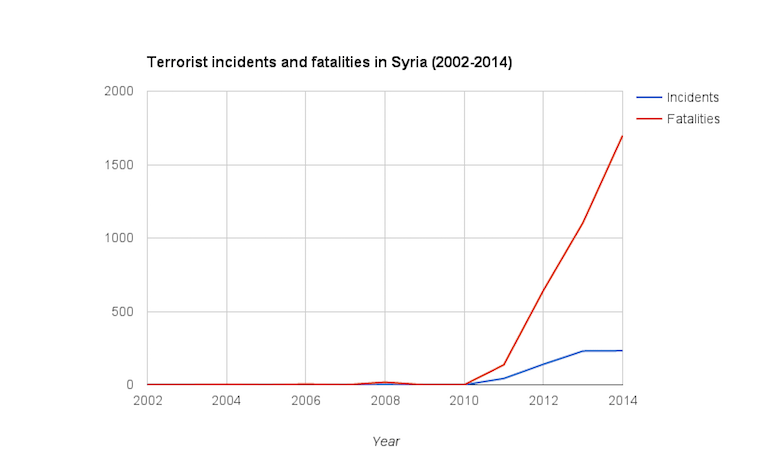 The war on terror creates more war – and more terror

Of the five countries experiencing the most terrorism last year, “only Nigeria did not experience either US air strikes or a military occupation in that year,” notes journalist Paul Gottinger in his analysis of global terrorism data.

In some cases, such as Iraq, it is widely acknowledged that Western intervention led to a surge in terrorism; British intelligence and US government reports have admitted as much (even Tony Blair came close to letting it slip), and al-Qaeda strategist Abu Musab Al-Suri has celebrated the results:

Decades of failed Western interventions have caused extraordinary suffering to the people of Iraq, perhaps killing as many as 2.9 million people. As Mehdi Hasan points out in the New Statesman: “If bombing ‘worked’, Iraq would have morphed into a Scandinavia-style utopia long ago.” Instead, the country is in chaos – breaking records for terrorist activity while ever more foreign fighters flood into the country day-by-day.

In other cases, like Syria, the connection is less clear. What is accepted, even by American intelligence agencies is that, after the deaths of hundreds of civilians and thousands of fighters from coalition bombs, Daesh (Isis) is certainly no weaker now than it was a year ago; in fact, its fighter ranks may have swelled from 20,000-31,500 to at least 80,000 in the past year.

The Global Terrorism Index has done a statistical analysis and found two factors to be most closely associated with terrorism:

These are the levels of political violence committed by the state, and the level of armed conflict within a country. The report finds that […] 88% of all terrorist attacks between 1989 and 2014 occurred in countries that were experiencing or involved in violent conflicts.

On Thursday, David Cameron set out his ‘moral case’ for launching British airstrikes in Syria, claiming they will “make us safer”. But it is abundantly clear that the war on terror has not made us safer. If defeating terrorism is the aim, then we need to start fighting for creation, not destruction.

Featured image via The US Army/Flickr.

First chart via the Global Terrorism Index 2015, the Institute for Economics and Peace.

Subsequent charts by the author, based on data from the Global Terrorism Index 2015.