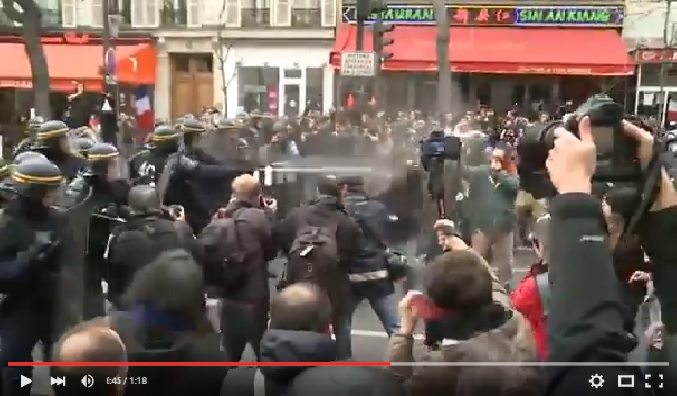 French police have used teargas and arrested over 200 people during demonstrations the day before the COP21 climate change summit opens in Paris. Protesters, defying the ban imposed following the Paris attacks, took to the streets as part of 2000 events taking place across the globe to highlight the need for urgent action on climate change.

Hundreds of demonstrators formed a human chain across the route of the protest which had been banned, and pairs of shoes were left in the Place de la Republique to highlight those unable to march.

Later in the day, tensions rose between police and around 200 protesters as they attempted to march, leading to scuffles and the use of teargas.

Police then surrounded protesters in a ‘kettle’, before arresting 208 people. According to Twitter users, police were indiscriminately arresting people, including those who were not involved in the protest.

Just to be clear, this arrest group includes many who were not marching and some who were not protesting. #COP21 #Marcheclimat

Emergency laws have already been used to put 24 climate activists under house arrest for the duration of the summit. The activists have been arrested and detained without charges being brought against them, or warrants being issued. Author and climate change activist Naomi Klein described the arrests as a “gross abuse of powers”, and further stated:

Given the stakes of the climate crisis, they are by their nature highly contested. That is democracy, messy as it may be. The French government, under cover of anti-terrorism laws, seems to be trying to avoid this, shamefully banning peaceful demonstrations and using emergency powers to pre-emptively detain key activists.

Following the terrorist attacks, a ban was imposed on all demonstrations in public spaces, and permission declined for marches due to take place. However, protesters have claimed the bans are politically motivated, given Christmas markets and football matches have been allowed to take place. In a video interview, activist John Jordan claimed:

It’s clear they want to shut down any critique of the COP21 process. They’re saying that basically people are going to be put into danger…Big crowds could be a security risk, and meanwhile they’re allowing the Christmas market to take place so it’s okay to go shopping. They’re allowing football matches, so it’s okay to watch sport.

Although protests started in the week before the summit, with creative resistance springing up across Paris.

In a response to the Paris attacks and emergency powers, Climate Games who have been coordinating protest during the summit stated:

We refuse this shadow of the future, we will not bend to the politics of fear that stifles liberties in the name of security. The biggest threat to security, to life in all its forms, is the system that drives the climate disaster. History is never made by those who ask permission.

However, repression against international protests is nothing new and, put in context, it looks as though France is merely using their emergency powers as yet another excuse to stop protest under the guise of protecting people from terrorism.

In the run up to the last Climate Change talks, in Copenhagen in 2009, Denmark introduced new powers, giving the police the ability to make pre-emptive arrests and increasing prison sentences for participation in civil disobedience. Additionally, a facility full of cages was built to accommodate those arrested. During the talks over 1000 people were arrested, with only a handful ever charged with a criminal offence.

Even before global terrorism could be used as an excuse to repress protest, Western states have used brutal, and sometimes lethal tactics against protesters. In 2001, during the protests against the G8 summit in Genoa, Italy, Carlo Giuliani was shot and killed during clashes with the police. The following day, police brutally raided the Diaz school where the alternative news site Indymedia was based and where activists were staying. Dozens were hurt, some with life-threatening injuries, as police attacked unarmed protesters.

International protests go hand in hand with police interest and repression of dissent. UK based undercover police officers were, and probably still are, involved in infiltrating many protests at global summits. Amongst others, undercover officers Mark Kennedy and Mark Jacobs were both involved in the G8 summits in Germany and Scotland. Corporate Spy Martin Hogbin, who supplied information to Threat Response International (and via them to BAE Systems), was present at various international protests, including the World Bank protests in Prague, the G8 in Genoa, and the World Economic Forum protests in New York.

I was with Hogbin at the protests in New York which took place a few months after 9/11. We watched as a small group of protesters who had been marching on the pavement with banners and drums were surrounded by police before being beaten, pepper sprayed and arrested for the “crime” of protesting. The arrests were indiscriminate and included people who had just been buying coffee at a nearby shop. Later that evening, we sat in a bar, watching the Super Bowl, and during the break, Paul McCartney appeared, singing about freedom. I cried angry tears at the thought of those still in custody, whose only “crime” was to exercise their right to protest, and the sheer hypocrisy of how the term “freedom” is abused.

Western governments often pay lip service to the freedoms they claim to protect, whilst simultaneously criminalising dissent. It remains to be seen how far the French government is prepared to go in shutting down the COP21 protests, but if Sunday’s actions, and the policing of this recent pro-refugee protest, are anything to go by, it is likely they will try to quickly subdue any demonstrations.

Mass protests, and particularly international ones, often attract repression. The use of emergency powers in France is just another in a long line of excuses made by governments who look for any reasons they can to shut down protest. However, it is important to remain defiant and resist this repression wherever and whenever it occurs.