So much for that 'Corbyn Crisis' on Syria. Labour unite behind the will of the people. - Canary 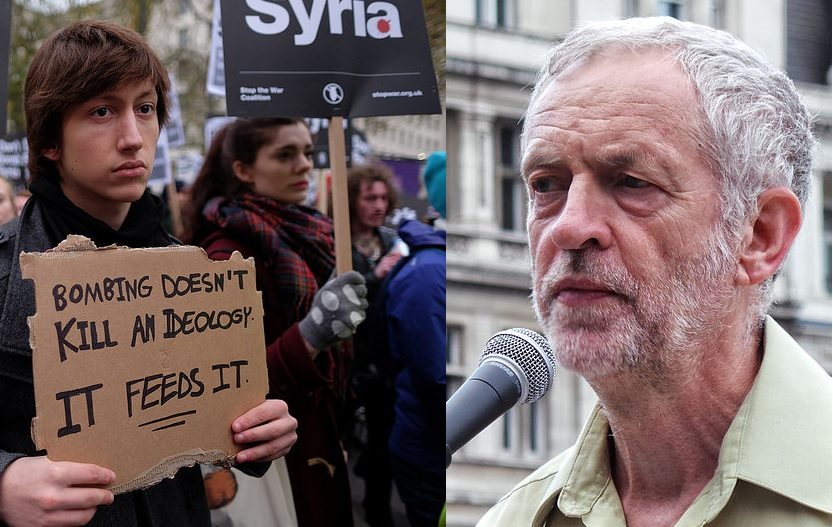 Jeremy Corbyn will respect the views of his party members by declaring Labour party policy is opposed to airstrikes in Syria. In keeping with his inclusive agenda, however, he will allow MPs a free vote on the issue in parliament.

The decision to make the official position of the Labour party an anti-bombing one is based on a poll the party initiated last week. Labour members were emailed and asked their views about the potential airstrikes. The poll attracted almost 110,000 replies, with around 75% opposed to bombing Syria.

Canvassing members on this important issue, and more to the point, listening to their responses, make for a refreshing change to the way political decision-making is usually done in the UK. It is also desperately needed after the rampant disrespect Tony Blair showed for the public and for parliament, when he ignored one million people marching on the streets in opposition to the Iraq war.

And it is, after all, citizens who will suffer the consequences of military action. Members of the public will be the people who fall victim to retaliatory attacks, if they take place. The public will also be the ones asked to bear more cuts to services, when too much money has been blown on bombs.

The free vote that has been given to Labour MPs regarding these airstrikes should then take the views of their citizens into consideration. As representatives of their constituents, and in particular their party members, their consciences should be firmly aligned to the wishes of those who elected them. It seems this message is already hitting home with some MPs. According to an article in The Guardian, a senior Labour source said:

Labour MPs seemed to have become more wary of backing military action over the weekend for fear of “marking their card” and getting singled out as targets for possible de-selection by activists.

Note the choice of words here. ‘Activists’ are those MPs fear, meaning citizens who are active in the political sphere. Jeremy Corbyn was elected on a huge mandate largely due to the fact he encouraged ‘active’ engagement in politics by the public. As The Canary recently highlighted, this has resulted in Corbyn being voted the most popular political leader in the UK in Ipsos-MORI’s latest poll. MPs would do well to learn from his example, but as Corbyn recently said himself:

I feel there are some people who haven’t quite got used to the idea the party is in a different place.

The Labour party are also demanding a delay on the vote for airstrikes in Syria, and a two-day debate on the issue, to give time for their concerns about David Cameron’s proposals to be addressed. Clarification has been requested about how strikes would actually strengthen Britain’s security, who exactly Cameron is suggesting would take control of Daesh’s territory once freed from their control, and how the bombing would contribute to a political settlement in Syria.

In fact, Corbyn has consistently advocated for a political and diplomatic settlement for the situation in Syria. This would include a negotiated arrangement for governance in Syria, which is currently being debated by a coalition of world powers. It would also require seeking to sever the supply line of money and arms to Daesh, in which Saudi Arabia, Turkey and Qatar have already been implicated.

Most importantly, the consequences of Britain joining the coalition of nations making airstrikes – already involving eight countries – on Syrian civilians need to be seriously considered. As Corbyn explains here:

One war doesn’t necessarily bring about peace, it often can bring yet more conflict, more mayhem and more loss.

It seems the Syrian people agree. The Observer recently published opinions on the possible UK airstrikes from Syrians, and one woman from Raqqa – one of the places Cameron wants to target – had an unequivocal message to send:

Surely it is incumbent on the UK to listen to the people whom we insist we are trying to save, just as it is on MPs to heed the views of their constituents. After 14 years of the ‘war on terror’, attacks have escalated by 6,500% and much of the Middle East lies in ruins. We should explore avenues that do not go through the barrel of a gun, and applaud the anti-bombing stance Labour have taken. After all, in a democracy, it is what their citizens have asked for.