The government is not unstoppable. Our junior doctors have just proved it [TWEETS, VIDEO] - Canary 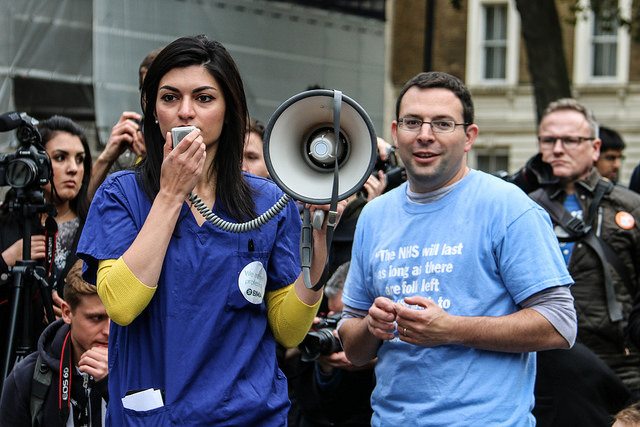 England’s junior doctors have secured an important first victory against the health secretary, Jeremy Hunt. On Monday, the British Medical Association (BMA) successfully pushed Hunt into lifting his threat to impose a new contract on our junior doctors. In response, the strike – planned to start on Tuesday morning – was called off at the eleventh hour.

However they have further battles ahead, as Hunt agreed to hold further talks with the BMA to come to a resolution. The medical profession is still fighting to end changes to a new employment contract that has been widely derided as ‘unrealistic’ and ‘unsafe’.

The statement on the BMA’s website from government mediation body the Advisory, Conciliation and Arbitration Service (Acas) – makes it clear that industrial action is on hold, but not off the table:

All parties are committed to reaching an agreement that improves safety for patients and doctors and therefore NHS Employers have agreed to extend the timeframe for the BMA to commence any industrial action by four weeks to 13 January 2016 at 17:00, to allow negotiations to progress. Within that timetable, the BMA agrees to temporarily suspend its proposed strike action and the Department of Health agrees similarly to temporarily suspend implementation of a contract without agreement.

Now Tuesday’s all out strike and the following two walk-outs planned this month will not go ahead. Hospitals are preparing for business as usual after more than 4,000 routine operations and treatments, including knee and hip replacements, were cancelled in advance preparation for the December action.

The suspension of strike action follows tense negotiations at Acas between the BMA, NHS Employers and a representative from the Department of Health. Hunt told the House of Commons on Monday afternoon:

I’m pleased to report to the house after working through the weekend, discussions led to a potential agreement early this afternoon between the BMA leadership and the government… This agreement would allow a time-limited period during which negotiations can take place and during which the BMA agrees to suspend strike action and the government agrees not to proceed unilaterally with implementing a new contract

In this midst of this fracas, a writer from a certain tabloid also got caught red-handed preparing to write a ‘hatchet job’ piece against junior doctors, if they went on strike:

Some medics saw Hunt’s move as an attempt to let the BMA’s ballot expire so he can return to impose the contract afterwards.

The pressure is still on nonetheless – as a growing chorus of medical professionals, industry bodies, and now even celebrities (as seen in the video below) are showing, this issue will prove to be a headache for Jeremy Hunt. And it’s a headache which won’t go away until he works with the medical profession, rather than against it.