An 'indy' England is becoming a Tory 'thing'. But all that glitters isn't gold. - Canary 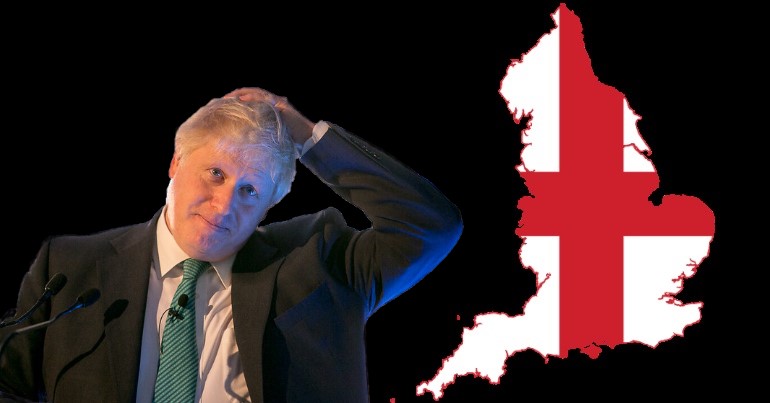 A survey has revealed that support for “English independence” among Tory voters is almost 50/50. It may serve to throw fresh light on the case for Scottish independence and the break-up of the United Kingdom as a whole – just as the SNP is saying it will withdraw from UK institutions like the House of Commons if the Westminster government continues to block a second independence referendum.

But does the rise of English independence support also show the increasing hard line, right-wing nationalism that exists in the now oddly named “Conservative and Unionist Party”? Or a deeper problem in England?

The National reported that a YouGov poll showed that Tory voters were split on the idea of English independence. The survey asked the question:

The independent YouGov poll organised by YesCymru, the non-party campaign for an independent Wales, suggests the end of the Conservative and Unionist Party is nigh, given that a massive 49% of Tory supporters want independence for England.

The 49% figure is based on people who answered “don’t know” or refused to respond being removed. For Tory voters, the overall results on the question of English independence were as follows:

Including Labour and LibDem voters, 35% of total respondents said yes once don’t knows were removed. And opinion on the break-up of the United Kingdom remains divided across the rest of the nations. Recent survey results show the following support (with don’t knows removed):

So the question of how united the United Kingdom is, is still unanswerable. But YouGov’s data on English independence threw up some interesting results.

The majority of Labour and Lib Dem voters did not back English independence. Most people who voted remain in the EU referendum didn’t support it, either. But there was a clear demographic that did. As YouGov found when it removed the don’t know responses, the majority of people who answered “yes” to the question of English independence voted for Brexit. Also, as age increased so did support for it, with over 65s split 48% in favour of English independence to 53% against. YouGov also showed the results by social grade. This is a standard measuring system which breaks people down into the following socioeconomic groups:

The YouGov polling showed the splits were as follows:

Also, the further north in England you went the more the support for English independence increased. But YouGov’s survey perhaps underscores a broader trend seen in England over recent years: the switch of working class voters to the Tories.

Back in 2014, the identity of ‘Englishness” was a UKIP one. Research from Cardiff University found that 23% of English people surveyed thought the party was best in answer to the question “Which party best stands up for the interests of England?”. 60% of UKIP supporters identified as “English” over “British”; the figure for the Tories was 50% and for Labour 37%. Meanwhile, the majority of UKIP supporters were aged 55 and over. The split by social grade was 53% ABC1 and 47% C2DE.

But since UKIP’s demise, many of these people have been voting Tory. As The Canary previously reported, voters in the lowest social grades (that is, the poorest people in the UK), had been moving away from Labour since Tony Blair was PM. But the issue accelerated from 2015 onward. Based on Ipsos Mori research, in the 2015 general election the voting percentages were as follows:

But also, as Ipsos Mori noted, the warning signs of a DE swing to the Tories were already there. It said:

Moreover, it was the best voting record for the Tories in DEs since Ipsos Mori began polling in 1974. The problem for Labour essentially being that the DEs who voted for UKIP in 2015 didn’t swing back to Labour. Then in the 2019 election, the Tories won majorities in the C2s (47% to 32% Labour) and DEs (41% to 39%). This represented Labour’s worst ever Ipsos Mori result in DEs.

Now, the YouGov question of English independence has shed more light on the issue.

while classically right wing on social issues looked distinctly ‘old Labour’ on economic issues, often favouring an active role for the state. As with other new parties of the right in Europe, UKIP appears to be mobilising the ‘left-behinds’, ill at ease with social change and economically insecure. There may also be an echo here of discussion in earlier decades about ‘working class conservatives’ whose support for the Conservatives appeared contrary to what were assumed to be their class interests.

And as The Canary previously wrote, this disillusionment that moved working class voters to UKIP:

in part… [also] drove Brexit. The poorest people know the system doesn’t work for them. They also know that the system is under strain – they see it in their everyday lives. A change, no matter what it was, seemed good.

Many of these people clearly thought in 2019 that Boris Johnson had the answers.

So, now Brexit is partly done and dusted, are working class people still looking for reasons why their lives are, as Cardiff University noted, so “precarious”? Polling from Lord Ashcroft in 2019 showed that Tory voters who also voted for Brexit overwhelmingly thought that Scotland and Northern Ireland benefited more from being part of the UK than England did from their union with it. They also believed (by 54%) that “England subsidises Scotland / Northern Ireland financially, and I’m not happy with that”. That’s a statement which Channel 4 FactCheck couldn’t verify is accurate either way.

Maybe an independent England is the next manifestation of working class anger at the system. But as with all voter swings to the right wing, people’s frustrations are misplaced. Because while the dissolving of the United Kingdom is for many people a positive thing, it will probably cement Tory power in England. What is a distinctly corporate capitalist problem – the built-in inequalities of the system – won’t be resolved by leaving England to the behest of those that like the system the way it is.