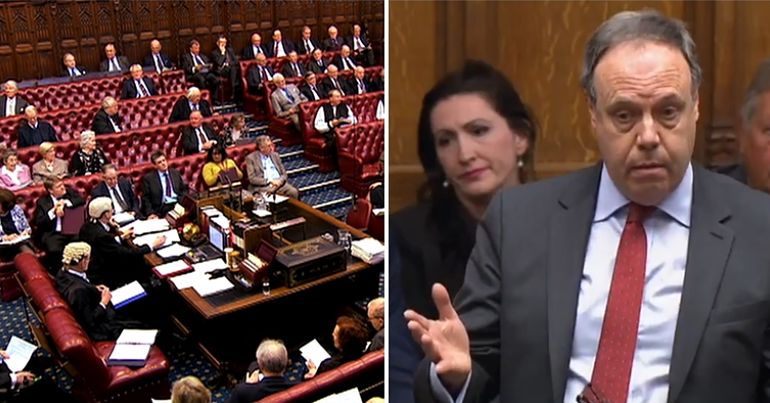 Prior to the outbreak of coronavirus (Covid-19), the people in the north of Ireland were already facing an uncertain future. This was because of a possible ‘no-deal’ Brexit. A no-deal Brexit could see a hard border reinstated between the north and south of Ireland and would likely result in huge job losses for the people of the north.

When coronavirus (Covid-19) lockdown began in March this year, even greater uncertainty arrived. Because in April, the Northern Ireland Statistics and Research Agency (NISRA) said the north was facing a “deep recession”. Then in July, one bank said it expected the north’s economy to shrink by 11%.

The political parties in the north joined the international campaign against the virus when they said ‘we’re all in this together’. So as the former DUP MP Nigel Dodds makes his way to the House of Lords, seen by some as an institute of cronyism, it’s debatable if he’s really “in this” for his working-class loyalist support base.

Nigel Dodds was MP for North Belfast from June 2001 until the December 2019 general election. Sinn Féin’s John Finucane took the seat from Dodds despite a campaign of sectarian hatred. Loyalists launched a targeted campaign against Finucane as sectarian banners, organised by the UDA, appeared across the constituency.

And the intimidation didn’t stop at Finucane or with republicans. The Ulster Unionist Party (UUP) initially announced it would stand against Dodds. However, as reported by The Canary, the UUP soon changed its mind following alleged intimidation from the loyalist terror group the UDA.

Sectarianism is not a stranger to the constituency. In fact just three months after Dodds was first elected to represent it, loyalist protesters harassed and threw a ‘blast bomb’ at Catholic children on their way to school.

In more recent times, Catholic families have also been prevented from moving into their north Belfast homes as a result of sectarian attacks. And it seems as if sectarianism is not coming to an end any time soon.

Unless a member of the Lords holds office or is a minister, they don’t receive a salary. But those who don’t get a salary can claim an allowance of up to £305 a day. In May 2019, a Guardian investigation revealed one Labour peer claimed £50,000 in expenses in 2018. And this was despite the fact he didn’t participate in any House debates.

Dodds takes up the position in mid-October with the title of ‘Lord Dodds of Duncairn’. He claims this title honours his political beginnings. So it remains to be seen if that title will mean anything for working class loyalists – or whether it’s just more lip service.