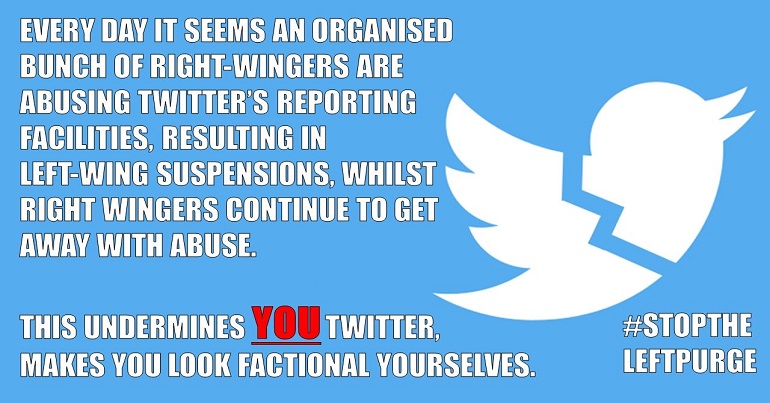 People are claiming there’s a coordinated “witch hunt” to silence left-wing voices on Twitter. The platform has been issuing suspensions, some of them high profile accounts. The latter included The Canary‘s editor-at-large Kerry-Anne Mendoza. But are people falling foul of Twitter’s algorithms? Or is it something more sinister? And, is it really anything new, anyway?

On Sunday 6 December, people were sharing #ReinstateTheLeft. This was in response to Twitter suspending several high profile accounts of left-wing users. The hashtag replaced the now-regular #SocialistSunday one. As The Canary‘s editor-at-large Kerry-Anne Mendoza tweeted:

Sending love & solidarity to you all on #ReinstateTheLeft day.
We knew these days were coming. That’s part of why we fought so hard for a Corbyn government. Capitalism is corrosive to democracy. It’s destroying people & planet. No amount of censorship will stop us fighting that.

So, what’s been going on?

Mendoza wrote on 30 November about how Twitter suspended her account twice. She noted that on both occasions, Twitter claimed it was a mistake. But it then suspended her again. This time for sharing someone’s email address. This was despite the person giving Mendoza permission to do so. And then, Twitter shut Mendoza down for a fourth time. On this occasion it was for sharing her own email address.

But Mendoza’s was not the only account that Twitter claimed had violated its rules. As RD Hale wrote for Council Estate Voices, it banned Rachael Swindon for sharing an LBC phone number and email address. Both of these are in the public domain. Twitter also reportedly banned the account Red Sarah for sharing Craft-D’s track Letter To Corbyn. Twitter claimed she had committed copyright infringement, whereas Craft-D had given her permission to share the song.

Others who have faced shorter but still entirely unnecessary suspensions include… Cornish Damo… Wrenasaurus, Resist Movement, and Andrew Feinstein.

But why has Twitter been so virulent in its banning of left-wing accounts?

People have been unpacking what’s been going on. Hale noted that Twitter’s algorithms may be playing a part:

The algorithm seems programmed to recognise certain elements of a tweet but not understand context. This means if you share your own personal email, for example, or the telephone number of the Samaritans, or a picture of your family pet, you could fall victim to mass reporting.

But as he pointed out, people have to complain to Twitter in the first place. And this is why people believe it’s a witch hunt. Swindon wrote that all the people Twitter has suspended have “several things in common”:

They are all prominent left voices on Social Media, they have all continued to support Mr Corbyn, and socialism, and they have all had the audacity to stand up for the oppressed people of occupied Palestine.

Mendoza also touched on this. She noted that:

She also believes some of it is down to supporters of Israel targeting pro-Palestinian activists:

The witch hunt argues people oppose Israel, not because of apartheid, but because of their hatred of Jews. No evidence is required to substantiate the claim. If offered, it mostly amounts to the last five times the witch hunt smeared someone. This self-referential disinformation network picks a target, drops its payload, and hopes the pressure generated will force a reaction. An apology, a cancellation, a suspension, a hostile environment. And so every time anyone gives them that, they enable and embolden the witch hunt. Each bogus apology empowers those false narratives, giving them a weight and a credence they don’t deserve. Ultimately, it makes it more likely that they will continue to escalate their attacks.

And they did. This is why Corbyn is now unable to sit in parliament as a Labour MP.

Meanwhile, on Saturday 5 December, a former Labour MP tweeted something which, according to Mendoza’s theory, should have been criticised. Ex-shadow chancellor Ed Balls tweeted:

This brilliant and award-winning piece of radio, in which I imagine having dinner with Joan Rivers, Nancy Astor, Dennis Healey, Danny Kaye and Les Dawson, is on @BBCRadio4 at 7.15pm – it's all improvised and the use of archive is magical..https://t.co/jIAWcEq2w7

Nancy Astor is considered by some to have been antisemitic:

ED BALLS’ DREAM DINNER GUEST IS NANCY ASTOR, WHO CALLED THE JEWISH PEOPLE ‘KILLERS OF CHRIST’ AND BLAMED THEM FOR ANTISEMITISM?

Yet Balls can tweet, and go on the BBC saying, that she would be one of his “dream dinner party” guests. This is pertinent to Mendoza’s point about what’s going on here. That is, an establishment figure endorsing an alleged antisemite is fine. Socialists who support Corbyn, defending Palestinians, is not.

But the bigger picture is that the ‘establishment’ has of course always tried to shut down dissenting voices.

Silence of the lambs

People who the establishment and its advocates consider a threat have long been actively silenced or disrupted. The only difference now is that the methods used have changed. It used to be things like fake letters (note the Zinoviev one of 1924), ‘spycops‘ and blacklisting being used to smear people and disrupt working class people organising themselves. Now, social media is also instrumentalised for the same purposes.

Some things stay the same, though. In a similar way to how MI5 monitored the Morning Star‘s predecessor, the Daily Worker, modern, online independent media outlets like The Canary are now targeted by the establishment in an organised manner.

There’s a far bigger question than freedom of speech here. It goes back to how, whenever poor and marginalised people try to organise themselves, the system kicks in and tries to stop them. If we’re ever to move past this point, we’ll need to use more than hashtags to win the war. The storm over Twitter suspending prominent left-wing voices goes right to the heart of the bigger questions about how we organise ourselves as a species and society. So yes, ‘reinstate the left’. But once that’s done, we have a lot more work to do.

Featured image via Resist: Movement for a People’s Party