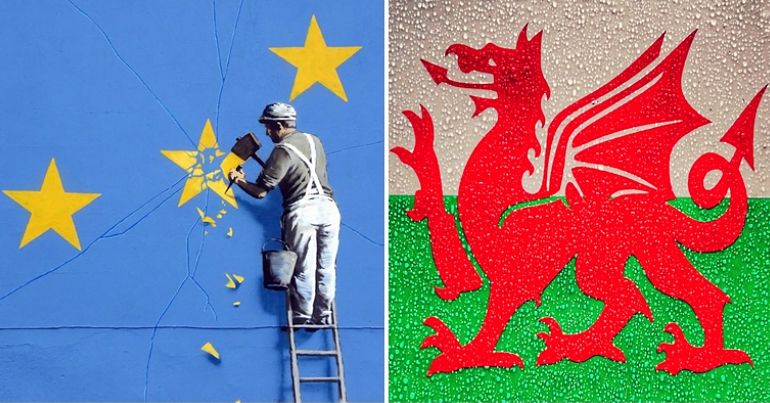 These final stages have shown Johnson’s failure to deliver the deal he said was “oven-ready”. It’s also shown the Tories’ preparedness to, once again, break the law. This reckless Tory approach means British consumers are facing higher prices. And, despite voting to leave the EU more than four and a half years ago, most businesses still aren’t ready for 1 January 2021.

More pertinent for devolved nations as a result of the UK’s exit is the Internal Market Bill (IMB). A bill which drives “a coach and horses through the devolution settlement”. Chair of YesCymru Siôn Jobbins told The Canary it means:

Devolution is dead. After the IMB it’s obvious that devolution is a cul-de-sac and in fact is going into reverse. If people want to keep the powers Wales has under devolution the only way to do that is to campaign for independence.

Welsh people voted for devolution on 18 September 1997. Then the Government of Wales Act 1998 established the National Assembly. The Welsh Assembly had the power to pass “secondary legislation” on areas such as agriculture, education and housing. Following another referendum in 2011:

the Assembly gained primary lawmaking powers in relation to specific subjects without involvement from Westminster or Whitehall.

On 6 May this year, it changed its name to Senedd Cymru (Welsh Parliament).

Johnson’s government introduced the IMB to eliminate trade barriers within the UK from January 2021. However, the IMB violates international law as it attempts to override parts of the UK’s Withdrawal Agreement (WA) with the EU. The Tories don’t even deny this violation.

The UK and EU agreed the WA in October 2019. It then came into force when the UK left the EU at the beginning of 2020. However, the IMB has also highlighted the limitations of devolution. Because while all three devolved parliaments oppose the IMB, Westminster can proceed with it regardless. Jobbins told The Canary:

After the Tory IMB, if people say they still want devolution but are against #indywales then they’re effectively saying they’ll complain, but appease Westminster and allow Wales to be incorporated into England.

So, the input from the devolved parliaments appears to be little more than tokenism. Because even though the Senedd highlighted that each provision of the IMB requires its consent, Westminster simply ignores that.

And that violates another agreement. This time the Sewel convention. Because while Westminster legislates for the whole of the UK, Sewel dictates it:

In Wales funding decisions are taken in partnership with local communities, to ensure that they reflect the needs of the people in Wales. The powers set out in the Bill completely undermine devolution and will see decisions currently taken in Wales clawed back by the UK government.

It could interfere in devolved parliaments’ efforts to protect the environment or tackle obesity. Charles Whitmore, co-ordinator of the Wales Civil Society Forum on Brexit and research associate at Wales Governance Centre, said:

The UK Internal Market Bill is an unprecedented challenge to devolution by Westminster. The narrative that the Bill is both necessary and represents a ‘power surge’ for the devolved nations is deeply disingenuous. The Bill removes devolution of state aid, gifting these powers back to London, and contains spending powers for the UK Government in devolved areas which are unnecessary for maintaining the UK’s already, highly integrated market.

What’s more, the UK Government claims to use these powers to replace EU funding, a matter which in Wales is governed in partnership between the devolved administration and the third sector with a focus on equality and cohesion, not by Westminster which seems intent on prioritising the industrial strategy and now internal market infrastructure.

It’s little wonder Johnson’s carrying on regardless given his feelings on Scottish devolution. So, that’s why YesCymru believes the best way forward for Wales is full independence.

Effects on the Welsh economy

While Wales voted in favour of Brexit by a narrow margin, Cymru Senedd opposes the IMB. Jobbins believes a hard or no-deal Brexit would be bad for Wales as:

Wales exports more than most UK regions and nations, we also export a lot to the EU and manufacturing is proportionately more important and a bigger [employer] than in many other parts of the UK. 90% of Welsh lamb goes to EU. Much is made of fish, but whilst 12,000 people work on British registered vessels in the UK fishing industry 58,000 are employed full time or part time on farms and small holdings in Wales alone. We’ve learnt today that a Brexit supporting Jim Ratcliffe, car manufacturer in Bridgend is moving to the EU.

So, he feels the IMB:

is basically the Tories trying to grab powers from Wales under the cloak of Brexit. They’re trying to grab back powers won for Wales in two referendums (1997 and 2011). One example is the single-use plastic law which is due to come into force in Wales in March 2021… the UK Government are now saying, because of IMB, that Wales doesn’t have the powers do to this. YesCymru believes the Consul General of Wales, Jeremy Miles MS should take the IMB to the UK Supreme Court. There are YC [YesCymru] members who voted Brexit – they didn’t vote for Wales’s powers to be grabbed back by Westminster.

[the UK] has more food banks than McDonald’s and we have a third of kids in child poverty. That’s not acceptable in a country which is meant to be rich. We have poor people in Wales but Wales as a country isn’t poor. Wales has 15%…of the whole of Europe’s tidal power… We export twice as much electricity as we use already. Our GDP per head is higher than Spain or Portugal’s. Our tax intake is marginally higher than New Zealand and they seem to be doing fine.

The hypocrisy of Brexit ‘independence’

It was obvious that Brexit would turn to attack the devolved Celtic parliaments once they’d ‘done’ Brexit. We can expect the suffocation of the Senedd and grabbing of powers all in the name of “unity” and “cross-border cooperation”. It’s funny that Brexiters can’t stop banging on about how great independence and national identity is except when it applies to Wales. British Brexiters think every small independent small country like Switzerland, Singapore or Norway is great … except if that small country is Wales.

Demanding full independence from EU rules only to be replaced by World Trade Organisation rules is an almost unspoken hypocrisy of Brexit. Not to mention Johnson’s desire for a ‘Canada style’ agreement. So he’s not opposed to international rules, just European ones.

But try as Johnson will to oppose independence in Wales and Scotland, pro-independence movements are growing. And as Jobbins concluded:

to be against independence is to accept Wales being slowly boiled like a frog.