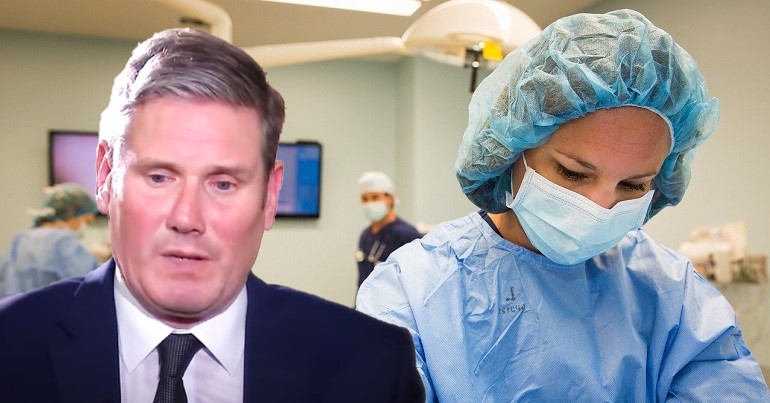 The Labour Party’s position on NHS pay is becoming increasingly poor. It’s ignored a huge social media campaign. It’s also fudging its local election messaging. So, Keir Starmer’s party is already in dire straits over the issue. And now, a group is writing to him – highlighting Labour’s lack of action.

This year, the Tory government is only giving NHS staff a 1% pay rise. And people aren’t happy. Not least because of the coronavirus (Covid-19) pandemic. Moreover, people are upset because in the past decade many public sector workers had a real terms pay cut. So, NHS organisations have spoken out and trade unions are incensed.

One group is now calling on Labour to act.

The group NHS Workers Say No has written an open letter. It’s directed at Starmer. You can sign it here. The letter calls on the Labour leader to act:

We are writing to you to ask for your unequivocal support and endorsement of our campaign demanding pay justice for NHS workers with a restorative, centrally funded, 15% pay rise for all NHS staff.

Our campaign was formed in 2020 by front-line healthcare workers who wanted to stand up and say no to the pay injustice they were facing. Since then, our community has grown to encompass hundreds of thousands of healthcare workers and other public supporters.

NHS Workers Say No has got dozens of politicians, journalists, and activists to put their names to the letter. The group told The Canary that over 4,000 people signed the letter in the first 24 hours alone. But so far, it says, Labour has not responded. In fact, the party is off on a tangent – doing its own thing.

Part of Labour’s local election campaign is on the NHS. But it’s a mess. For example, deputy leader Angela Rayner tweeted that:

In May you can vote for a pay rise for our NHS heroes, and you can do it from the comfort of your sofa.

Moreover, Labour’s official position on it is unclear. Currently, it backs “at least” a 2.1% pay rise. It’s also reportedly going to use parliamentary mechanisms to try and force the issue. But 2.1% is not enough. And NHS Workers Say No is putting more pressure on Labour.

Starmer: meet with us

It will be giving Starmer all the signatures of people that have signed the open letter. And NHS Workers Say No is going to ask him for a meeting. Holly Turner, an NHS nurse and part of the group, told The Canary:

Two of the leading health Unions (GMB and Unite) back the 15% pay ask (the Royal College of Nursing are demanding 12.5%). But we never imagined that part of our campaign would be lobbying the Labour Party. It supposedly prides itself on creating the NHS and being a voice for workers across the country. But, here we are.

The staffing situation is critical. We are unable to recruit new staff or retain our skilled and experienced staff. This puts us all at risk, both the workers and our patients. If the Labour Party care about the future of our health service which they appear to be using for their entire local election campaign, it’s time for Starmer to step up and back the workers in their fight for pay justice.

Indeed. Starmer does need to step up and give Labour’s full support to NHS workers. Otherwise, the party’s position and its local election campaign will ring hollow.