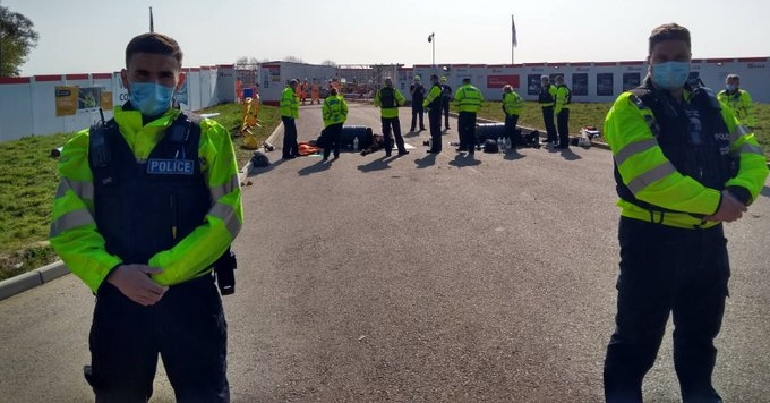 A group of campaigners blocked the entrance to a construction site to demand an end to the government bankrolling new private megaprisons.

The blockade carried on overnight. A campaigner tweeted on 20 April:

Waking up to a #megaprison after a cold night. @kiergroup have a long history of exploiting prison labor and #blacklisting workers who try to #unionize yet not that many people know who they are or all the horrors they've been building. Enough #kierendshere @netpol @autonomy_news pic.twitter.com/6vi6ZUuHTh

The protest is part of a week of action against multinational construction company Kier, which has been profiting from several massive infrastructure projects – including HMP Five Wells and the HS2 high-speed rail project. Campaigners say these projects “have a wide ranging and detrimental impact not just environmentally but also socially”.

HMP Five Wells in Wellingborough is just one of several private prisons currently planned or under construction. According to Corporate Watch:

In 2016, the British government announced plans for one of the biggest prison building programs in generations: the construction of six new ‘mega-prisons’, plus five new ‘community prisons’ for women.

Corporate Watch highlighted that HMP Five Wells will be run privately and:

A greater percentage of prisoners are locked up in private prisons in the UK than in any other country in Europe, or even in the United States.

The campaigners point out that the privatisation of prisons highlights the profit motive behind mass incarceration. There’s huge amounts of money to be made out of locking people up. And there are huge government contracts for the prison-builders, the private companies running prisons or providing transport from prison to court, the high-tech companies providing surveillance equipment, and for the private contractors working for the National Probation Service.

Prisoners also provide a lucrative workforce to be exploited for profit. Prisons are increasingly using prisoner labour and engaging in profit making partnerships with private companies.

Maxine, one of the blockaders, said:

The prison system disproportionately affects those who are least powerful in society. People of Colour and Gypsy, Roma, and Traveller people are all massively over-represented in the prison system, for example.

[it] is clear that harm [caused by prisons] is not felt evenly and the nature of who is locked up is greatly racialised, classed and gendered.

The lock-on at Five Wells was finally removed after 35 hours:

It's been hours since the cops started cutting and they've still not made it through the first lock-on outside #Wellingborough mega-prison. Fuck you @kiergroup for constructing so many cages #kierendshere @JournoJane @casperhughes2 @TheGardianNews @BBCBreaking pic.twitter.com/FiYSUInW2t

#BreakingNews the last person locked on outside #HMP5Wells has been cut out. Only took them 35 hours. So sorry @kiergroup if you've been inconvenienced… Actually no we aren't #fuckkier Stop putting people in cages and war profiteering @Freedom_Paper @TheCanaryUK @autonomy_news pic.twitter.com/UTBKBbcfAo

The Canary contacted Kier for a comment about the protest. We had not received a reply at the time of publication.

The blockade of HMP Five Wells was part of a week of action against Kier, dubbed ‘Kier Ends Here’.

On 19 April, a Kier construction compound for the HS2 rail project was also blockaded. HS2 is currently being targeted because of its destruction of woodland for private profit.

Prisons and environmentally damaging projects like #hs2rail both displace people and enact institutional racism and classism.

The week of action against Kier has also seen an anti-Kier mural appear in Bristol’s Stokes Croft. A demonstration is also planned for 22 April in Bristol:

Anti Kier and Anti Prison mural appears on the streets of Bristol today as part of the @kierendshere week of action.#kierendshere #nomoreprisons pic.twitter.com/cMC0i1PyQK

As a component of the capitalist machine Kier are an enemy and a target for those engaged across a number of campaigns and struggles: the anti-HS2 movement, struggles against the prison industrial complex, anti-gentrification struggles and tenants unions, workers unions, animal liberation, anti-war campaigns, anti-nuclear and wider anti-capitalist struggles.

Finally, the campaigners point out that Kier is not doing well financially:

Importantly, Kier are in financial jeopardy. Their stocks have been falling, their contracts failing, their staffing cut and their assets sold in an attempt to save themselves. By targeting Kier when they are vulnerable we can see tangible victories in our movements and create deeper bonds of solidarity between those seeking radical social change. We can send a message to the next developers eyeing up these contracts that our communities will come together and fight against the destruction they cause.

If the first few days are anything to go by, the week of action against Kier signals the start of a concerted struggle against one of the corporations profiting from the UK’s megaprisons and from the destruction caused by HS2- a struggle in solidarity with all of those behind prison bars and in defence of the natural world.