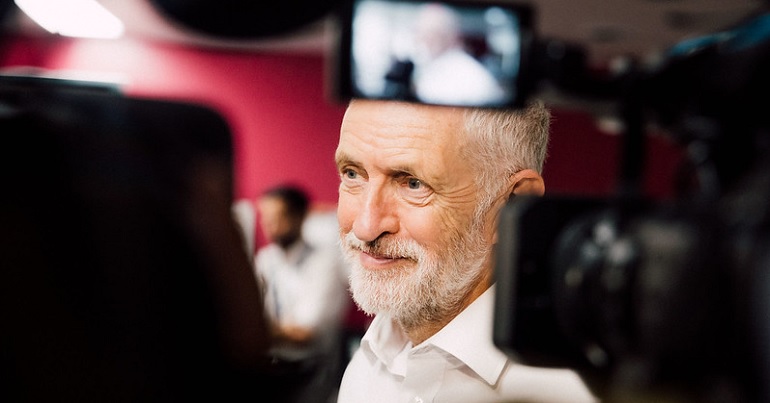 Former Labour Party leader Jeremy Corbyn has said why he thinks the corporate media was hostile towards his leadership. He gave his comments as part of a series on Twitter. And Corbyn pulled no punches, saying that several outlets like The Canary offered him and the party support when the corporate press didn’t. His comments also serve as a reminder of the toxicity of the system and a history lesson.

Writer and activist Rachael Swindon arranged for Corbyn to answer some questions. She’s been sharing them on her Twitter. And one of the subjects Corbyn spoke about was the media. He explained why he thought the corporate media was so hostile:

The manifesto we put forward in 2017 was only radical within the terms of modern British politics. Because, in reality, it was beginning to turn the clock back on the terrible period of neoliberal economics started by Margaret Thatcher and the IMF [International Monetary Fund] cuts of the 1970s.

Thatcher, along with former US president Ronald Reagan, partly instigated and then accelerated the rise of the form of capitalism we have today: what Corbyn referred to as neoliberalism. But as George Monbiot documented in the Guardian, its roots date back to the 1930s.

The roots of neoliberalism

Neoliberalism centres around the idea that the stock markets are king. As Monbiot wrote:

Attempts to limit competition are treated as inimical to liberty. Tax and regulation should be minimised, public services should be privatised. The organisation of labour and collective bargaining by trade unions are portrayed as market distortions that impede the formation of a natural hierarchy of winners and losers. Inequality is recast as virtuous: a reward for utility and a generator of wealth, which trickles down to enrich everyone. Efforts to create a more equal society are both counterproductive and morally corrosive. The market ensures that everyone gets what they deserve.

But before Thatcher and Reagan, it was actually James Callaghan’s Labour government of the late 1970s which really opened the door to neoliberalism in the UK. As Economics Help wrote:

In 1976, the minority Labour UK government of James Callaghan was ‘forced’ to borrow $3.9bn from the IMF to stabilise the value of Pound. The loan was also accompanied with conditions to cut public spending and raise interest rates. It marked a symbolic break with the post-war economic consensus and was a reflection of persistent problems in the post-war UK economy.

In other words, the IMF giving the UK money in return for cuts to public services was the beginning of the end for democratic socialist policies in the UK. They only properly returned to the mainstream with Corbyn’s 2017 manifesto.

So naturally the corporate media, which enjoyed the fruits of neoliberalism from the off, were hostile to this. But in reality, that manifesto was hardly off-the-wall. As Corbyn noted for Swindon:

when I did an interview for a Swedish journalist during the 2017 election, at the end of it he looked at me and he said: ‘Mr Corbyn, I don’t want to disappoint you, but all this is terribly mainstream in Sweden. This wouldn’t even be particularly commented on. All you’re proposing is a bit of public ownership and the empowerment of the working class. That’s something we’ve been doing for the past century’.

Indeed. As Investopedia wrote, the so-called Nordic model “combines elements of capitalism and socialism”. It is:

the combination of social welfare and economic systems adopted by Nordic countries. It combines features of capitalism, such as a market economy and economic efficiency, with social benefits, such as state pensions and income distribution.

So, it was left to independent media to support Corbyn’s Labour. As he noted, it came from:

the Morning Star, which sadly its circulation is very small. We got lots of support on independent online media, SKWAWKBOX, [The] Canary, Double Down News, and a number of others

And of course, the old, corporate press attacked new independent media just like it did Corbyn.

Of course, none of this is surprising to Corbyn supporters and the left more broadly. But Corbyn’s comments do offer some well-timed reflection on the past few years; all the more important given the new direction of the Labour Party. And his tenure also offers an insight into how the left needs to move forward in the UK. Because the hostility from the corporate capitalist media isn’t going anywhere.

One of my questions for Jeremy asked about media hostility towards him.

Here’s a bit of what he said…

You can hear more of Corbyn answering Swindon’s questions via her Twitter here. Also, search #SwindonAsksCorbyn