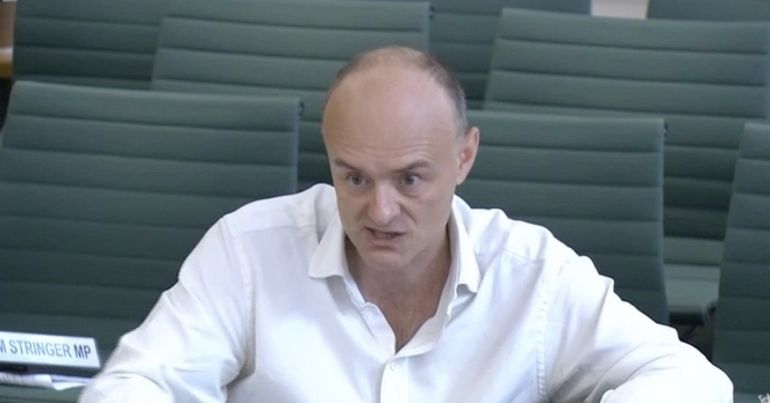 On 26 May, Dominic Cummings, former chief adviser to prime minister Boris Johnson, gave evidence on the government’s mishandling of the coronavirus (Covid-19) pandemic. He appeared before a joint parliamentary committee to answer questions from MPs, and he claimed the government failed to protect people’s lives over the course of the pandemic.

Having witnessed the government’s mismanagement of the pandemic, people took to Twitter to highlight that these ‘revelations’ about government negligence, mainstream media bias, and Labour leader Keir Starmer’s weak opposition were nothing new.

Sadly, we were right

Sharing a video of Jeremy Corbyn calling on the government to take the pandemic seriously in March 2020, The Canary’s editor-at-large Kerry-Anne Mendoza said:

He was right. We were right. Tens of thousands died. https://t.co/WYgnEXLuHr

Expressing the sentiments of young people on the left, Jason Okundaye shared:

Boris Johnson is not fit to be prime minister

During the evidence session, Cummings stated that prime minister Boris Johnson is “unfit for the job”. He claimed that Johnson regarded coronavirus as “another scare story”, and acknowledged that the government failed the nation in its mishandling of the pandemic.

As Femi Oluwole explains, we have ample evidence that the Tories are responsible for tens of thousands of avoidable deaths:

You don't have to trust Dominic Cummings to know whether he's telling the truth about some of the deadly failures of Boris Johnson during the pandemic. pic.twitter.com/oVjx9cyRel

The truth is that Dom Cummings always knew that Johnson was unfit to be PM. He just concluded that he was the only person with enough oomph to win a majority and push through Brexit. And for Brexit’s original architect that was more important than anything.

Matt Hancock should be fired

Cummings set out a number of allegations of negligence against healthcare secretary Matt Hancock, including sending people with coronavirus into care homes without being tested, leading to an increase in infections and deaths of care home patients and carers. Cummings added that Hancock should have been fired for “criminal, disgraceful behaviour that caused serious harm”. Since the beginning of the pandemic, healthcare workers have been campaigning for the government to take action to protect staff and patients.

Sadly the news that our Health Secretary is someone who "repeatedly lies" isn't that new to us – or to the NHS staff who tried to share the truth about PPE last year. We took the government to court for them. We're asking #WhatsThePlanMatt? for them and…https://t.co/qLzTlqWSMm

The only reason Matt Hancock has not resigned over his appalling handling of the pandemic is that we have allowed Boris Johnson and his government to become completely unaccountable.

And when a government can do whatever they want without consequence, everybody loses. pic.twitter.com/LjMq0scYXu

The health secretary faced questions in the House of Commons on 27 May relating to Cummings’ allegations. According to Paul Brand, he came out “pretty unscathed”:

Matt Hancock escaped pretty unscathed there. Alas the quality of questions, aside from a few notable exceptions, was fairly poor. Hugely helped by lots of supportive Tory backbenchers.

We can’t trust the mainstream media

Cummings stands accused of leaking government information relating to coronavirus (Covid-19) lockdowns to the press. One Twitter user shared the moment that the BBC concealed Cummings’ revelation that he leaked information to BBC journalist Laura Kuenssberg:

Here is video of the BBC coverage of the moment Dominic Cummings names Laura Kuenssberg as the media person he kept leaking to. pic.twitter.com/NRP6REAv17

Reflecting on the establishment press’s failure to scrutinise the government over the course of the pandemic, Ash Sarkar said:

It's not a good reflection on our political media that what we already knew – that the PM was careless with people's lives, that tens of thousands of deaths could have been prevented – gets taken seriously only when translated into the gossipy language of elite conflict.

Cummings admissions that Johnson is unfit to be a PM, Hancock should have been sacked, and the govt was a shambles makes the media's – and Starmer's – abysmal failure to hold them to account even more shocking.

A democracy needs a healthy media and opposition – we have neither.

Another glaringly obvious government failure is Labour leader Keir Starmer’s failure to rally any sort of meaningful opposition to the Tories. As David Osland said:

The major, glaring problem with today’s evidence is that whilst it should destroy the government – it won’t. And it won’t because for the entirety of this pandemic the Labour Party sat on a fence and allowed the public to believe that nobody could have done any better.

cummings: everyone was lying, nobody had a plan, we made promises we knew we couldn’t keep, the prime minister was happy for everyone in the u.k to die as long as he looked good in the media and we were told “we’re fucked and we’re going to kill a lot of people”

As people have highlighted, we didn’t need to hear from Cummings to identify the government’s negligence nor Starmer’s failure to challenge it. But what we do need, as unions and bereaved families are calling for, is accountability for the government’s mishandling of the pandemic.