Zarah Sultana asked the PM if we sold the missiles that killed Palestinian children. He wouldn't answer. - Canary 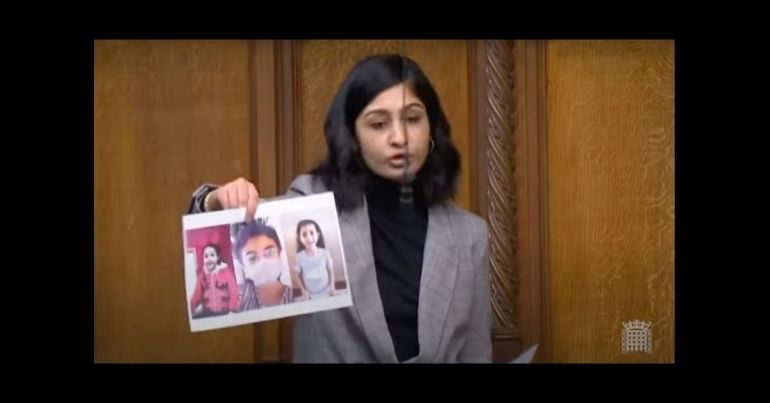 On 26 May, Coventry South MP Zarah Sultana asked prime minister Boris Johnson to confirm that British-made weapons weren’t used in the recent airstrike that killed hundreds of Palestinians in Gaza. The prime minister was unable to confirm or deny the allegations. This came as foreign secretary Dominic Raab expressed his support for Israel and called for peace during his visit to the region. Meanwhile hundreds of activists protested outside an Israeli arms factory in Leicester.

On 21 May (local time), a ceasefire brought an end to Israel’s 11-day attack of the Gaza strip, which killed over 230 Palestinians, including 65 children. In spite of the ceasefire, the Israeli state’s illegal occupation and apartheid regime continues unabated. By 21 May, Israeli forces had already stormed Al-Aqsa mosque.

During Prime Minister’s Questions in the House of Commons on 26 May, MP Zarah Sultana held up an image of three Palestinian children who were killed in an Israeli airstrike. Sultana said:

The Israeli military murdered 63 other children and 245 Palestinians in its recent assault on Gaza. The call for Palestinian freedom has never been louder, but this Conservative government is complicit in its denial. It has approved more than £400m in arms to Israel since 2015.

So can the prime minister look me in the eye and tell me that British-made weapons or components weren’t used in the war crimes that killed these three children and hundreds of other Palestinians?

The prime minister was not able to answer Sultana’s simple question. In response, rapper Lowkey said:

Boris Johnson knows the answer to this is yes.

Both the F-16 and F-35 fighter jets Israel used contain components from Britain's largest arms company BAE Systems and the Elbit drones Israel used are also manufactured in the UK.pic.twitter.com/bN0VLX3AQz

This is good from Zarah. British weapons are being used by Israel to murder Palestinian children: @BorisJohnson knows that well, which is why he refused to answer. https://t.co/dhgm2zN2E7

Not only does the UK supply Israel’s military regime, they also continue to buy Israeli arms which have been “battle-tested” on Palestinian civilians, including in its most recent bombardment of Gaza which killed 71 children.

It’s time for the UK to #StopArmingIsrael. pic.twitter.com/TPa02Azk0K

You can start by not selling Israel weapons it uses to start that "cycle of violence" you disingenuous goon.

On 26 May, Raab met with Palestinian and Israeli leaders. In meetings with Israeli officials, Raab confirmed the UK government’s support for “Israel’s right to self-defence”. He called for “lasting peace”, and celebrated “the flourishing” relationship between Britain and Israel. Israeli prime minister Benjamin Netanyahu thanked Boris Johnson for his “staunch and unwavering” support during Israel’s deadly bombardment of Gaza.

Raab’s visit to Israel is to underline the British government’s support for its policies of siege and bombardment of Gaza, annexation of the West Bank and attacks on Palestinians in Jerusalem.

In spite of the UK government’s support for the Israeli state, the Palestinian solidarity movement continues to grow. Hundreds of protesters demonstrated outside an Israeli arms factory in Leicester on 26 May. Cambridge students have organised an open letter calling for the university to divest from companies complicit in Israel’s oppression of Palestinians. And we have seen nationwide protests in support of Palestinians’ struggle for independence.