In Leicester hundreds demonstrated outside an Israeli arms factor. What if that could be repeated nationwide? - The Canary 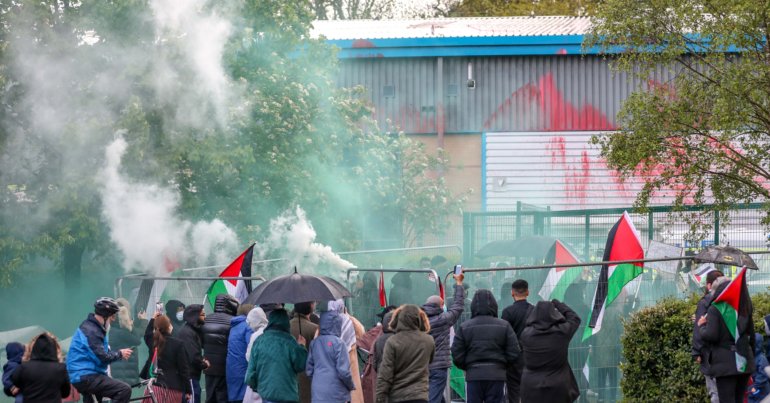 On 24 May, hundreds of local people joined a demonstration outside an Israeli arms company in Leicester. The protest was in support of a six-day long rooftop occupation of the factory by campaigners calling for the factory to be closed down.

Demonstrators were met by lines of police in riot gear:

Undaunted, the crowd tried to prevent the police from arresting the people who had been occupying the factory:

The resistance continues! Brave supporters have managed to hold the site and blockade the removal of arrested activists for over 6 hours. And it isn’t stopping until we #ShutElbitDown pic.twitter.com/LSUnlRkcrn

A moment of solidarity and rage

The factory occupation began on 19 May in response to Israel’s aerial assault on the Gaza Strip, which killed 247 Palestinians, including 66 children, in 11 days. A ceasefire was announced on 21 May.

While the Leicester occupation was ongoing, thousands demonstrated around the UK marking a day of action on 22 May. Up to 180,000 people marched in London.

What if the hundreds of thousands of people who have taken to the streets across the UK could turn their attention to the factories providing weapons to fuel Israel’s attack? What if the scenes last night outside Elbit’s Leicester factory could be repeated at Elbit’s ten sites across the UK?

We need “more and more” action

Palestinians have been calling for international solidarity as they rise up against Israel’s brutal occupation. Just listen to this speech by Shahd Abusalma, a Palestinian woman in Gaza who lives in Sheffield:

Another Palestinian woman – speaking from the occupied West Bank – told The Canary:

We thank the solidarity campaigners for their activities but it is not enough. What is happening in Gaza – the destruction and killing of people in cold blood needs more and more action. Even if the war ends, what is next? Shall we wait for another war, for more crimes before we organise and call again for a free Palestine?

During the factory occupation in Leicester, campaigners managed to enter the factory and photograph drones being manufactured there:

Activists in #Leicester entered Israel's arms factory & saw the body of a military drone. The police then entered the building, removed the drone and are currently guarding it. #ShutElbitDown pic.twitter.com/SNlXiqgQu8

They had also threw red paint at the walls of the factory, symbolising the blood of the Palestinians killed by equipment manufactured by Elbit.

Over the weekend campaigners in Bristol daubed Elbit’s registered office with red paint, and wrote Save Sheikh Jarrah across its walls, in solidarity with the struggle for survival of Palestinians living in the East Jerusalem neighbourhood of Sheikh Jarrah:

The night after the arrests in Leicester – on the morning of 25 May – campaigners occupied the roof of another Elbit factory, this time in Tamworth.

In response to Israel’s brutal occupation – and to the massive Israeli attack on Gaza in 2009 – Palestinian civil society groups called for a two way arms embargo of Israel in 2011. This two-way embargo demanded that states cease selling weapons to Israel, and also refrain from buying armaments from Israeli companies.

Demands for the closure of Elbit’s UK sites snowballed during the last full-scale attack on Gaza in 2014. Direct actions against Elbit’s factories increased in momentum as Israel attacked Gaza, campaigners occupied the roof of Elbit’s Shenstone factory, and blockaded its gates with lock-ons at the company’s Kent premises.

In 2015, Elbit unsuccessfully applied for a high court injunction against protests at its Shenstone factory

In 2020, the Palestine Action campaign group was formed, and since then it has further intensified the struggle against Elbit, holding repeated occupations of Elbit sites, break ins at the company’s factories, and demonstrations outside Elbit’s office in London. The campaign has also been targeting the company which owns Elbit’s London office, LaSalle Investment Management. Campaigners are calling for LaSalle to evict Elbit.

Taking the fight to their doorsteps

​The demonstration in Leicester in support of the rooftop occupiers was the largest demonstration outside a UK Elbit factory in this long history of campaigning. The support for Palestine on the streets right now shows that we can repeat what happened in Leicester at Elbit’s sites across the UK. We owe it to our Palestinian comrades to make sure that happens.

Tom Anderson is part of the Shoal Collective, a cooperative producing writing for social justice and a world beyond capitalism. Twitter: shoalcollective​