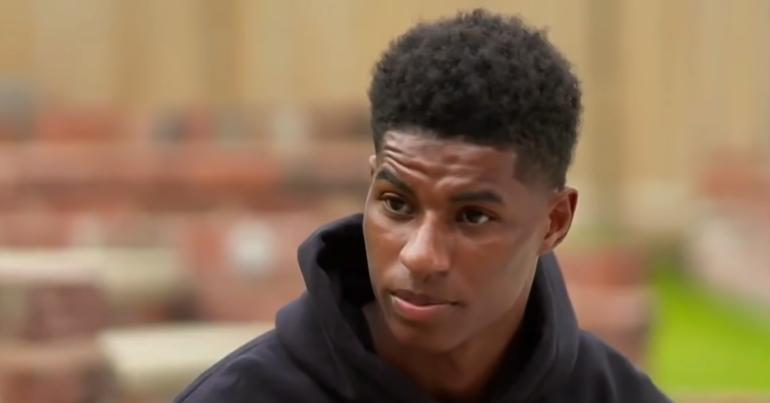 Earlier this week, Marcus Rashford topped the Sunday Times giving list due to his donations to food poverty and community charities.

In conjunction with FareShare, he has donated £20m – more than his own wealth of £16m. He is the youngest person ever to top the list.

This adds to a year of work advocating and pressuring the government to provide free school meals for disadvantaged children.

Here’s a look back at all the times Rashford pushed to help kids when the government didn’t.

I salute @MarcusRashford not just his advocacy but also for his personal generosity. It’s an extraordinary example from such a young man. He is a tremendous role model and a tribute to our nation. https://t.co/RGmFIGVyJU

Rashford first campaigned for free school meals to be extended over summer 2020 to help struggling families.

His campaign eventually forced the government to make a U-turn and announce a £120m fund to provide meals for 1.3 million children.

This is your reminder that while Boris Johnson was happy to spend £800 per week on takeaways it took a public backlash and tireless campaigning by Marcus Rashford to get him to extend free school meals for hungry kids.

Rashford did not leave it there – he formed the Child Food Poverty Task Force in September 2020. In conjunction with several charities, he lobbied the government for long-term action on food poverty.

He then started a petition calling for the government to end child food poverty. The petition asked for free school meals to be provided during all holidays to all households on Universal Credit. It also asked for voucher values to be increased.

These were all recommendations from the National Food Strategy (NFS), an independent review of food policy commissioned by the government.

More than one million people signed.

Labour called for free school meals to be extended in parliament, but Conservative MPs voted the motion down 322 to 261.

I think Marcus Rashford has done a fantastic thing , bringing the attention that children in the UK are hungry then persuading the government to change there policies.
He is a shining light to the world and a great ambassador for child poverty.

Instead, venues across the country stepped in to support Rashford’s campaign. Saying they ‘didn’t stand with the 322’, cafes, pubs, and restaurants pledged to provide food for children in need.

Again, the campaign led to a government U-turn. Boris Johnson ended up personally phoning Rashford to tell him the government would provide a £396m package for free school meals during the Christmas, Easter, and summer holidays.

The campaign is still calling for the government to provide free school meals to all families where parents are receiving benefits.

Marcus Rashford has donated £20 million to food, poverty and community charities (partnered with FareShare) – a sum greater than his personal wealth.https://t.co/7ewmuiXjnz

In January, several families posted photographs of their food hampers, many of which were small and insufficient.

Rashford immediately called out the parcels as “not good enough“, saying kids and parents would still go hungry.

The Department for Education later promised to investigate the contents of the parcels.

Marcus Rashford. He has Single handedly done more for this country since 2020 than the entire government has done in years https://t.co/441Lpq1w3A

Rashford has now launched a book club to get disadvantaged children into reading. It kicked off in April with the donation of 50,000 books to primary schools.

The club is targeted at the estimated 383,000 UK children who have never owned a book.

From 2010-2019, cuts to local authority funding caused more than 800 public libraries in the UK to close.

It’s confusing that we are debating the implementation of government-commissioned findings. Gov did the research. Gov gathered the data. And solutions were formed from that (NFS). I endorsed them…so what’s to debate? Let’s discuss the findings and discuss the solutions.

Rashford’s campaigning makes it clear it’s possible for the government to take action on food poverty – but it shouldn’t take so much work to get them there.