The Tories are selling your GP records to the highest bidder. Here's how to to stop them. - The Canary 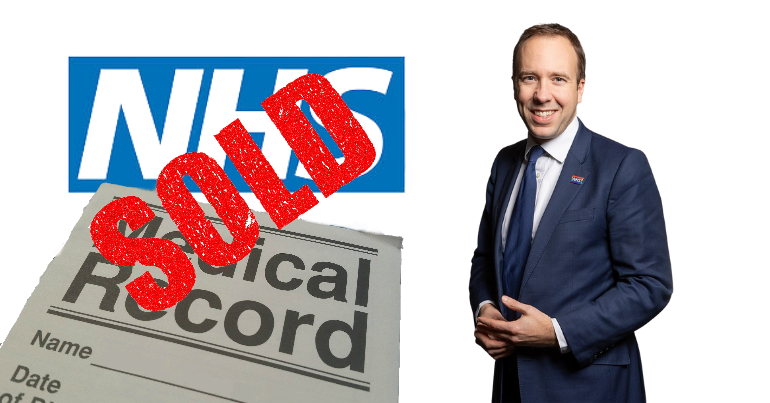 The Tories are going to sell your NHS medical records. Not that this is new. Because they’ve been flogging them off already. But what is new is that this scheme is larger than previous ones. And you have a deadline to opt out by.

Byline Times has reported that the Department for Health and Social Care (DHSC) is going to be selling people’s data from GP practices. As writer Phil Booth noted:

from 1 July, NHS Digital has announced that “data may be shared from the GP medical records about… any living patient registered at a GP practice in England when the collection started”.

Its website states that some organisations may “need access” to your data. NHS Digital says “these include but may not be limited to” several government bodies, including Public Health England. But crucially, NHS Digital also says it can give access to your data to:

But here’s the thing. The Tories have already been selling off patient data to private companies.

The Observer reported in December 2019 that:

US drugs giants, including Merck… Bristol-Myers Squibb and Eli Lilly, have paid the [DHSC], which holds data derived from GPs’ surgeries, for licences costing up to £330,000 each in return for anonymised data to be used for research.

On this occasion, it was the Clinical Practice Research Datalink (CPRD) that was selling data, not NHS Digital. It’s another government body. Meanwhile, the government claimed that the info was anonymous. It also said the sales were in line with all regulatory requirements. But then, the Observer followed the story up in February 2020. And it claimed that this anonymisation was not strictly that. One campaign group told it that:

Removing or obscuring a few obvious identifiers, like someone’s name or NHS number from the data, doesn’t make their medical history anonymous. Indeed, the unique combination of medical events that makes individuals’ health data so ripe for exploitation is precisely what makes it so identifiable. Your medical record is like a fingerprint of your whole life.

Now, it appears this sale of our private medical info is expanding to NHS Digital.

Years in the planning

As the British Medical Journal (BMJ) noted, this data sharing plan has been in the pipeline for several years:

the current position on extracting patient data is a bit of a mess: a patchwork of agreements between different research bodies and individual practices (or groups of practices). For the past three years NHS Digital has worked with the Royal College of General Practitioners (RCGP), the BMA [British Medical Association], and others to develop a more coherent structure and process. This new method of data collection, the General Practice Database for Planning and Research (GPDPR), will enable these activities to continue more broadly beyond the pandemic.

In short, everyone’s GP records will be pooled together in one place. But as the BMJ also said, neither the RCGP nor the BMA have “endorsed this process”. This is despite them working with NHS Digital on it. So, it seems the government is pushing ahead with it anyway. It claims this is to do with the coronavirus (Covid-19) pandemic. But of course, the reason for this is all about money.

It’s little wonder the Tories want to flog your medical records. Because as the Observer wrote:

Access to NHS data is increasingly sought by researchers and global drugs companies because it is one of the largest and most centralised public organisations of its kind in the world, with unique data resources.

It put the value of our medical data at £10bn a year. But of course, the government claims this is all perfectly legit. It told the Observer in 2019 that “rigorous processes” meant people’s privacy was protected. And it said that:

Ethically conducted research using CPRD patient data sets has brought enormous benefits to patient care, including providing evidence for the National Institute for Health and Care Excellence (NICE) blood-pressure targets for patients with diabetes, as well as working with universities, regulators and the pharmaceutical industry who research the safety of their medicines.

But as Byline Times reported, the Tories have just made a concession.

On 12 May, NHS Digital updated its website. The public now has an opt-out date. NHS Digital states that it will start sharing data on 1 July. But if you don’t want the government to share your data, you need to opt out by 23 June. There’s a form you need to complete. You can access it here via instant download. Then, you need to send this to your GP by 23 June.

But you need to do it now. Because if you opt-out later than the 23 June deadline, then all your records up to the point you officially submit your wishes can be shared anyway. Meanwhile, as the Financial Times (FT) reported, a campaign group has already begun a legal challenge to the new rules. The FT also noted that, essentially, the DHSC tried to sneak this under the radar:

The plan to create a new data set was announced by Matt Hancock… in early April and publicised mainly on blogs on the NHS Digital website, and through flyers at GP surgeries

Of course, the Tories sneaking around makes sense. Because a similar plan by the government fell flat on its face. The BMJ  said this was “partly” due to public “mistrust”:

Consent to share data involves trust, and the ill fated care.data project five years ago collapsed partly because of patients’ mistrust about how their data might be used. Concern hasn’t been voiced on a similar scale this time, but that may be because so few people know about

So it’s crucial that as many people as possible know about the Tories’ data sale. Spread the word. Opt out. Because otherwise the Tories will soon be selling off your personal data to the highest bidder. And who knows where it could end up.