Government plans to lift restrictions could have devastating consequences - Canary 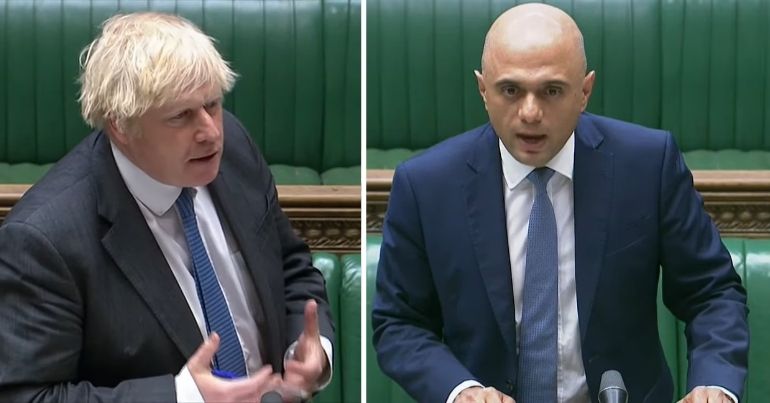 The prime minister is said to be announcing the 19 July lifting of coronavirus (Covid-19) restrictions this afternoon.

Instead of relying on laws, the government will reportedly allow people to make ‘personal decisions’ about virus protection measures.

Measures such as mask-wearing and social distancing are likely to become voluntary in just two weeks.

This is despite cases currently climbing every day, and scientific advisers warning that the move is a mistake.

According to the latest available weekly data, case rates were at 214.4 per 100,000 of the population. On 2 July, there were 27,125 reported cases – that’s almost double the daily rate from the week before.

We are at almost 30,000 daily cases again – numbers last seen in mid December.

Many have noted that hospitalisations and deaths, however, are not climbing at the same rate.

Scientists say vaccines have been successful in weakening the link between cases and hospitalisations. Some Conservative MPs have said the link is now ‘largely broken‘ and have defended the government’s plans.

However, scientists say the weakening not enough.

As we know, hospitalisations and deaths are growing at a much slower rate compared to number of cases. According to Independent Sage scientist Professor Christina Pagel, the UK could be on track for 80,000 cases by 19 July, and that’s if case growth slows from its current rate.

Hospitalisations & deaths are far lower than they would be without vax. But they are rising – and if we get to over 100K cases a day, many will still get very sick and some will die. Plus hospitals are already stressed and don’t need more stress!

Before the government takes its final decision on lifting the remaining restrictions, we would urge real caution, so that we do not lose the significant gains we have made in recent months and risk putting the ability of the NHS to overcome ever-growing treatment backlogs in jeopardy.

McCay further mentioned long Covid as a “big concern” for the NHS. According to Office for National Statistics (ONS) data released at the beginning of June, almost 400,000 people reported having symptoms of coronavirus lasting almost a year after first getting infected.

The ONS estimated one million people were experiencing long Covid symptoms in April.

Those with long Covid symptoms report that it affects their ability to work, and many said they have been discriminated against as a result.

Scientists are still investigating the long-term effects of coronavirus on the organs, but studies have found it impacting kidneys and the brain.

Lifting restrictions could cause an increase in infections. And with the impact of long Covid becoming clearer, a rise in infections becomes more of a concern.

As of 3 July, 63.8% of the adult population were fully vaccinated, and 86% had had their first dose. This still leaves millions without any form of protection against the virus.

Cases are rising fastest among younger people who are much less likely to be vaccinated. This has led to chaos in schools, with 1 in 20 pupils reported to be isolating on 24 June alone. Schools still have at least two weeks left until they close for the summer.

Children may be less likely to suffer deadly consequences from coronavirus, but it is well documented that missing school affects disadvantaged children disproportionately.

Towns and cities in the north of England are still seeing the highest case rates across the country. The government has ignored pleas from towns like Bury for extra support to tackle rising case numbers.

Now, when you’ve got a surge of Delta variant and possibly Delta-plus variant and the North West is significantly affected, they are thinking they want to open up everything again.

Circumstances in Greater Manchester are different to other localities. I don’t think you can have one unified centralised approach.

I think it’s too early to come out of restrictions completely when infection rates are still going up.

Lifting lawful restrictions on 19 July, while cases are soaring, could lead to more deaths, long Covid, and inequality across the country.

More cases also risk the possibility of more mutations which vaccination doesn’t protect against as efficiently.

Authorities have now approved Pfizer vaccines for over 12s – with just a bit more time, this could reduce cases in young people.

Opening up now seems like the essence of dates rather than data driving the government.

As Pagel said, the government is ‘letting things rip’ for the sake of “a few more months”. She added:

govt is planning to remove the few measures that we do have: social distancing, masks, isolation and allowing mass events & venues such as nightclubs without testing or other measures.

This is a deliberate choice to allow millions of young people to get infected.

With our excellent vax programme + better public health measures we can vaccinate instead of infect – and avoid the negative consequences of infection.

Instead govt has given up and plan is to “live with” soaring infections. It’s a terrible plan.