The DWP is effectively cutting people's benefits in April - The Canary

The Department for Work and Pensions (DWP) will be effectively cutting people’s social security from April. It means that for people claiming benefits like Universal Credit, the cost of living crisis will be even more catastrophic.

Even worse, the DWP is trying to disguise these cuts as an increase in benefit payments.

A 3.1% increase will means that parts of Universal Credit will go up. For example:

Most other social security, like Personal Independence Payment (PIP), will also go up by 3.1%.

Some health and disability-related elements of Universal Credit and social security are going up by a bit more. For example:

A few social security payments are going up by less. For example, for Employment and Support Allowance (ESA) the:

These increases may seem like a good thing. But in reality, they are actually cuts.

An actual cut to your money

The problem is inflation. The DWP has based the social security rise on September 2021’s inflation rate. But since then, it’s shot up. Forecasts now say inflation could hit 7% by the spring. So, that would mean the 3.1% social security increase would actually be a cut.

The Institute for Fiscal Studies (IFS) crunched some numbers on this. It worked out how an inflation rate of 6% would affect the 3.1% social security increase. The IFS found that some 10 million households will lose on average, in real terms, £290 a year. This will come on top of the government’s national insurance hike of 10.4%; a 54% rise in energy bills; stagnating real-terms wages, and more potential increases in petrol prices.

As the IFS showed in a graph, rising prices will hit the poorest people the hardest: 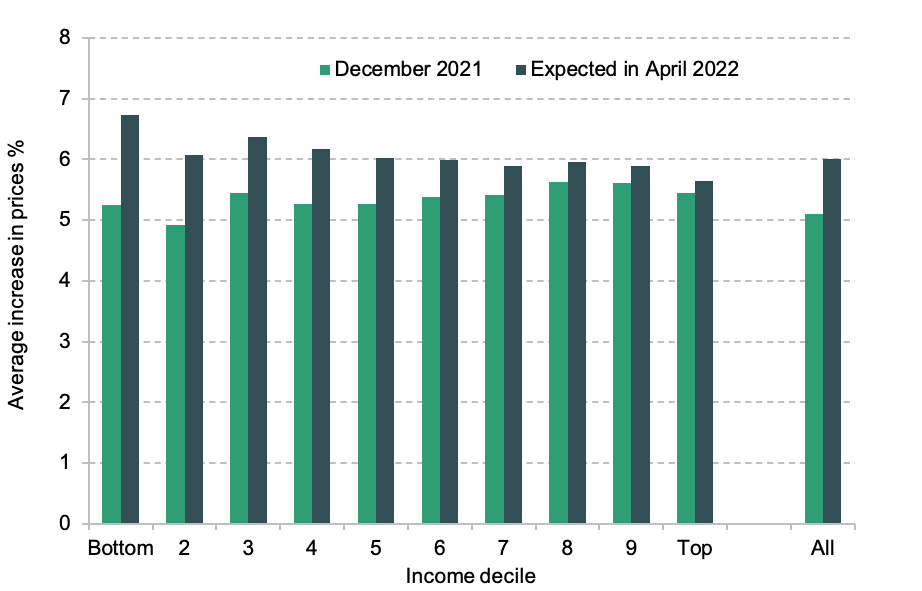 Meanwhile, the overall benefit cap is staying the same. This is the maximum amount households can claim in social security. The cap hasn’t changed since the DWP lowered it in 2016. The rates since then have been:

The benefit cap was keeping around 150,000 children in poverty as of 2020. Affected households lose an average of £55 a week because of it. And the number of people the cap hits has more than doubled because of the coronavirus (Covid-19) pandemic. Current high inflation, coupled with the DWP’s real-terms social security cut, means the cap will have an even greater negative affect on countless households.

A cut in all but name

Overall, the DWP’s social security increase cannot be called anything else but a cut. 2.5 million families were already struggling to pay rent and heat their homes. 15% of households live in food insecurity. 4% of households have used a foodbank. Now, if inflation continues to soar, 2022 could be an even more devastating year for countless families. So, it’s up to us and our communities to support each other as best we can.