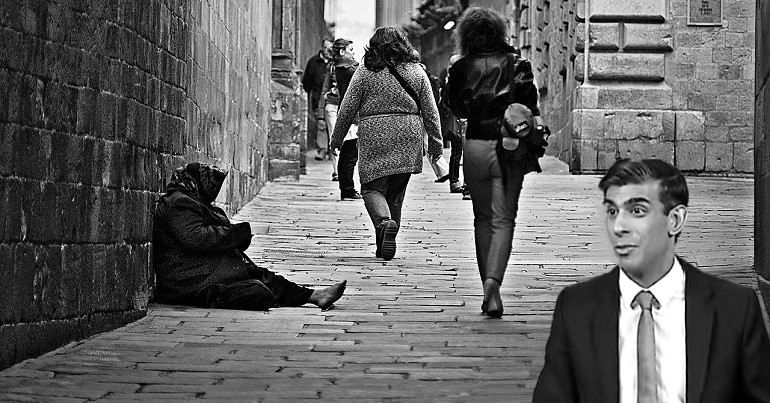 The Conservative Party is once again causing an explosion in destitution. That’s the verdict of a new report. The think tank behind it previously warned that the number of families living in the poorest conditions had already sharply increased. And now, its warning is even more dire. Because government policies from the likes of Rishi Sunak could leave over two million people in the most abject of poverty.

The Canary reported just under a year ago on the National Institute of Economic and Social Research (NIESR). It looked into destitution levels in 2020. This is defined as:

In real-world terms, the Joseph Rowntree Foundation says destitution is:

going without the essentials we all need to eat, stay warm and dry, and keep clean.

In February 2021, NIESR said that destitution in 2020 had more than doubled. It found that the number of households living in this level of poverty had gone up from 197,400 to 421,500. NIESR also found that the amount of destitution was different across the UK. For example, in the North West of England rates were three times higher than the UK figure. And NIESR’s research is against a backdrop of increasing social decay.

Now, NIESR has produced another report. It says that destitution this year is once again going to explode.

NIESR released a report called Powering Down, Not Levelling Up. In it, NIESR made various economic forecasts. For example, it:

NIESR also looked at the government’s “levelling up” plan. It said that with no new money, the plan “severely limits the prospect for regional regeneration”. In real terms, NIESR said:

by the end of 2024, poorer regions in the North of England and the devolved nations will on average be some £7,500 worse off in terms of disposable income per person than in London and the South East.

NIESR also forecasts an increase in destitution for the financial year 2022-23. And it was this which was of most concern.

In short, the think tank said that based on its forecasts and current government policies, the number of destitute households will spiral. It said the:

impact of this inflation in energy and food prices is a 31 per cent rise in destitution, bringing the total number of destitute households to about 1 million.

It’s difficult to quantify how many people this will be. Previously as the Guardian noted, 2020’s 220,000 rise in destitute households may have equated to around 500,000 people. So, based on that, NIESR’s forecast of one million destitute households could potentially mean over 2.2 million people will be living in the most abject poverty.

NIESR also said that the effects of destitution would be different across the UK. Despite the government’s levelling up agenda, this extreme poverty would hit the West Midlands and North East very hard. But its the North of Ireland that would destitution could hit the hardest: 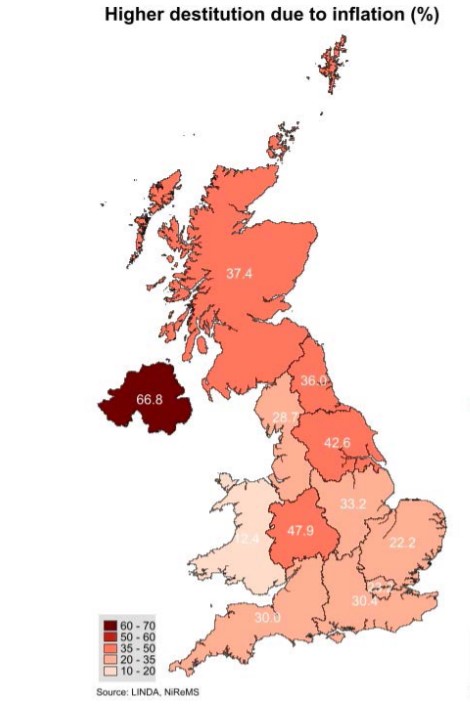 The government: creating a crisis

The NIESR report paints a bleak picture of the next year. As it summed up:

The costs-of-living crisis is hitting the lowest income households hardest, as they spend a greater proportion of their income on fuel and food, while neither wage growth nor welfare benefits compensate for fast-rising inflation.

It also noted that the impact among the lowest income households would vary. This is because, as NIESR said, government changes to social security and the minimum wage:

benefit a slightly different segment of the population – not the poorest who are without stable jobs and falling through the cracks of the welfare system, but the poor yet slightly better off households who are lucky to retain their jobs.

However, even this small gain for this segment will soon be wiped out by increases in National Insurance contributions

2022-23 will see a perfect storm of destitution – created by the government – hit the poorest people in the UK. The economic and social shock will be huge. But the physical and mental impact of this on people already struggling will be even greater. Community will be everything – and as a community, we need to come together to support each other in the face of the government’s economic and social carnage.

Featured image via Jerzy Gorecki – Pixabay and the Telegraph – YouTube