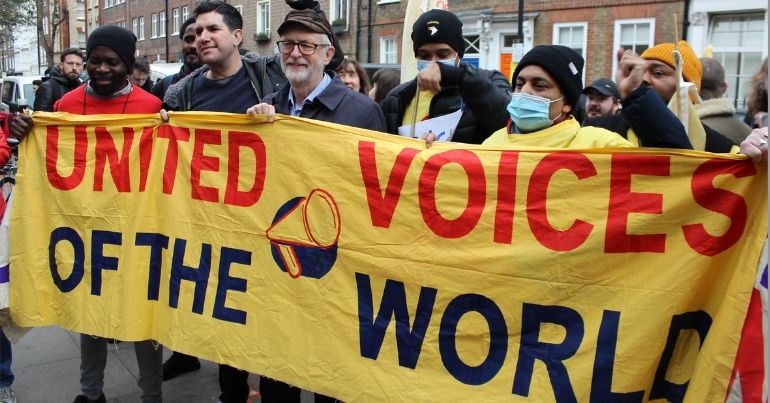 Great Ormond Street Hospital (GOSH) has warned it will apply to court for an injunction unless striking workers stop picketing on hospital premises and reduce the number of protesters. This comes just five days into a planned 44-day strike by GOSH security guards over unfair terms and conditions. But striking workers – supported by trade union United Voices of the World (UVW) – aren’t backing down without a fight.

The striking guards are fighting for full sick pay and the same benefits as other NHS workers, including annual leave and sick leave.

A GOSH spokesperson told The Canary:

Our lawyers have written to the union involved in this action requesting a signed undertaking: to stay out of Trust premises; leave entries and exits clear for patients, families and staff; and protest in a manner which respects the setting of a children’s hospital.

However, UVW has said that it “will vigorously contest” GOSH’s application for an injunction. A spokesperson for the trade union told The Canary:

UVW does not accept that GOSH has any right to the undertakings sought which are oppressive and a draconian and unjustified encroachment on our member’s human rights to picket and protest.

UVW alleges that on one day of strikes, the picket line was “violently attacked” outside GOSH CEO Matthew Shaw’s offices.

GOSH condemned the violent incident in a statement, saying:

We understand that a GOSH contractor was present when the assault took place and we are working with the police to understand his role before deciding what action is most appropriate.

The striking security guards are a group of predominantly Black, Brown and migrant workers. In January, GOSH security guards launched legal proceedings against their employer at an employment tribunal. They – along with GOSH cleaners – are claiming indirect racial discrimination over pay inequality and the denial of NHS benefits.

GOSH is made up of departments of families. And in a family circle, even when one member of the family feels he’s been left behind, or he’s not been treated fairly, there’s always going to be a reaction.

It is shocking that GOSH would rather throw tonnes of money at corporate lawyers to attack their security guard’s human rights to strike and protest, rather than simply treating them with respect and as equal members of the NHS.

We have made clear that we remain available to negotiate at any time, and hope that common sense will prevail and that the security guards’ reasonable demands will be met without the need to move to an all-out strike.

A GOSH spokesperson told The Canary:

We fully support the right to strike and the right to peaceful protest, but the recent conduct of protesters has caused distress to children and families and affected our ability to provide essential care.

Anyone looking to support the striking security guards can donate to their strike fund, sign their petition, or write a letter to GOSH bosses urging them to give hospital guards equal NHS terms and conditions.