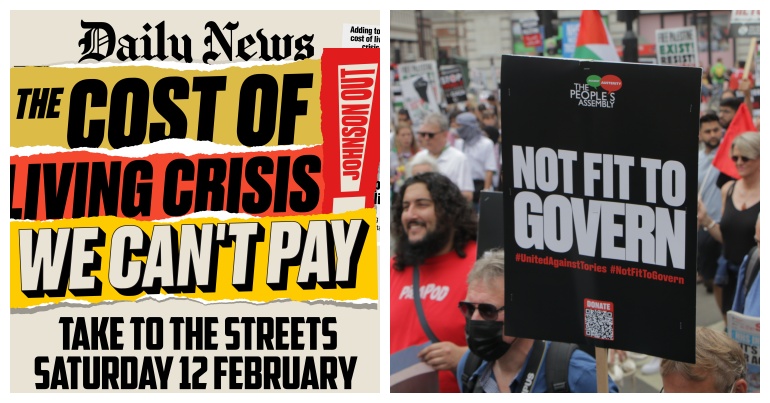 People’s Assembly (PA) groups are gathering in at least 25 locations across the UK on Saturday 12 February to protest “the extraordinary rise in energy bills”. The campaign group says that because of the massive predicted increase in household bills:

22 million people will see an annual increase of £693 on their bills, with even more for those on pre-payment meters.

So PA has organised a series of street demonstrations:

Please keeping checking:https://t.co/iqmL9d1VhE for latest updates on protests near you.
Everyone out on the Streets this Saturday 12 Feb.

So far events have been organised in 23 locations to protest the cost of living crisis. Jeremy Corbyn will address the rally in London. The campaign group has put out a call for everybody to get involved. It said:

Public outrage and the response to the Cost Of Living Crisis is gaining traction so fast that we’re asking everyone to help grow these protests and to make them as big as possible. Please use all your networks and social media platforms to promote and build for events around the UK this Saturday!

Growing anger at the inequality

There is real anger at this growing crisis. Working people could not be working harder and yet life is getting so much more difficult. People can see clearer than ever the inequality in our society: that while there are companies making massive profits and the richest individuals are getting so much richer, everybody else is having to suffer, making very difficult decisions to try and get by.

Older people will be cold in their homes, people will be struggling to feed their children, when none of this is a crisis of their making. Meanwhile, the Government sits by and does nothing to help the people. So, we will be out on the streets saying enough is enough.

PA said that in addition to the announced rise in energy bills, people are already facing:

the hike in national insurance, the cut to the £20 uplift in Universal Credit…rising inflation, an increase in Council Tax and rising food, rent and fuel costs.

Yet still, according to PA, there’s:

little action from the Government other than their widely criticised £200 off energy bills, which when you read the small print turns out to be a loan…

Who should join the protest?

Well, everybody basically. In particular PA is asking trade unions and campaign organisations to encourage their members to attend and “promote Cost of Living demonstrations in their area”. Some have already started spreading the word:

Join the protests in Glasgow and Edinburgh this weekend. @pplsassembly https://t.co/JQemwQ1I6j

And trade union leaders are adding their voice to these protests. General secretary of Unite the Union Sharon Graham said:

This crisis was not caused by working people and we are not going to take wage cuts to pay for it. Why should the public always bail out the markets and policy makers? Where firms can pay, they should pay and under my watch Unite will unashamedly continue to protect the living standards of its members.

Low paid workers cannot and will not pay for the government’s problems. The hike in heating bills, fuel, transport costs and National Insurance contributions, at the same time as pay is held down and pensions are being attacked, leaves most workers with a real cost of living crisis.

Now is the time to get organised, build a movement of opposition and fight back. Please join us on Saturday to demonstrate our anger and determination. By standing together we can change things and help stop the hardship millions are faced with.

At present protests are taking place at 25 locations across the UK. They’re as far west as Derry in the north of Ireland, as far north as Edinburgh and as far south as Eastbourne and Brighton. But more events are being added “as momentum builds”.

You can find out details about your nearest protest by going to the People’s Assembly website and clicking on the location for details, or by keeping an eye on its event page.

What they want people to do?

PA believe these demonstrations will see:

hundreds of organisations and thousands of individuals take to the streets, to demand higher wages, no to gas and electricity disconnections and much more. There is a noticeable change in attitude towards the Government. People are turning against them and want proper solutions to this crisis.

It’s also asking people to publicise these protests by tweeting #CostOfLivingCrisis and #WeCantPay!