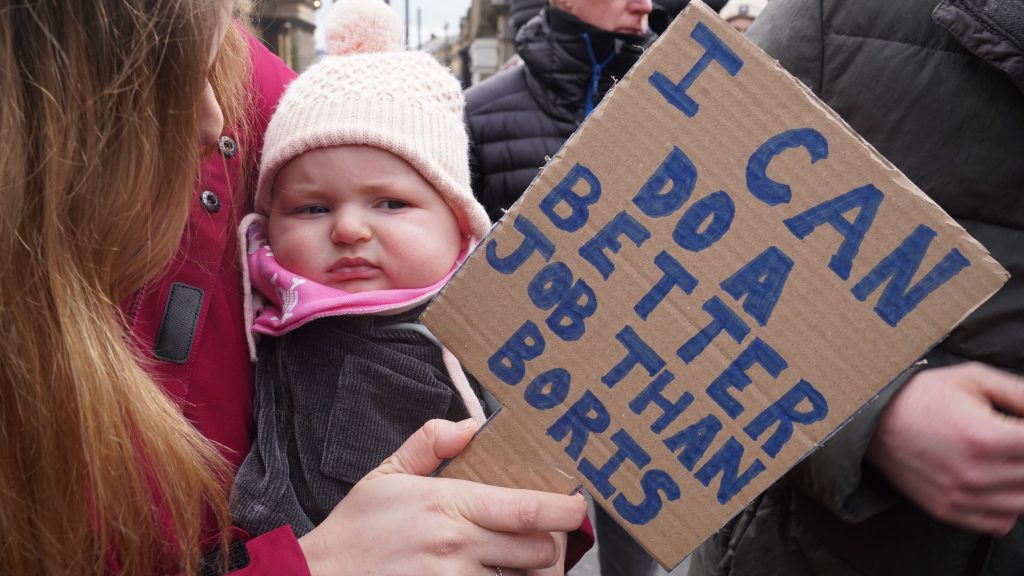 Protests were held in several regions on Saturday 12 February to highlight the injustice of of the cost of living crisis.

The People’s Assembly co-ordinated the demonstrations, supported by trade unions, in towns and cities around the UK.

In Newcastle, a placard referred to “Tory tricksters”. Meanwhile another sign held next to a baby said “I can do a better job than Boris”.

Laura Pidcock, national secretary of the People’s Assembly, said there’s “real anger” at what she described as a “growing crisis”.

Working people could not be working harder and yet life is getting so much more difficult.

People can see clearer than ever the inequality in our society, that while there are companies making massive profits and the richest individuals are getting so much richer, everybody else is having to suffer…

Meanwhile, the Government sits by and does nothing to help the people. So, we will be out on the streets saying enough is enough.

‘People are fed up’

Sharon Graham, general secretary of Unite, said protests are taking place because “people are fed up of rich men telling them that they have to pay for boardroom greed and colossal market failure”.

This crisis was not caused by working people and we are not going to take wage cuts to pay for it.

Why should the public always bail out the markets and policy makers? Where firms can pay, they should pay and under my watch Unite will unashamedly continue to protect the living standards of its members.

Low-paid workers cannot and will not pay for the Government’s problems.

The hike in heating bills, fuel, transport costs and national insurance contributions, at the same time as pay is held down and pensions are being attacked, leaves most workers with a real cost of living crisis.