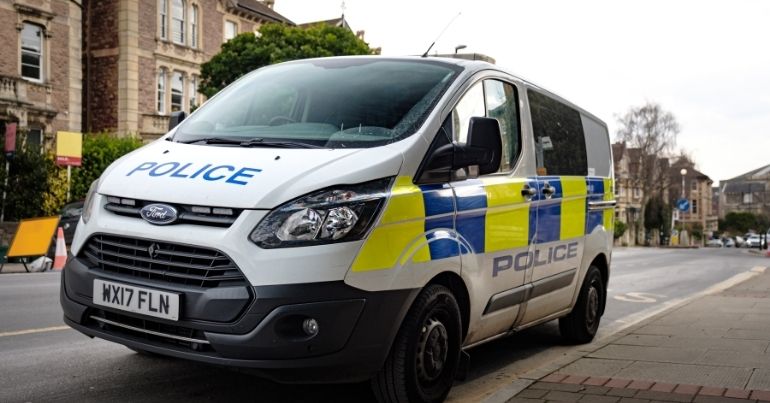 Founder of police monitoring group Bristol Copwatch John Pegram is launching a case against Avon & Somerset Police. It’s on the grounds that the force is in breach of data protection laws. And he’s currently raising funds to ensure that he can take the force to court.

Pegram seeks to challenge his inaccurate record on the Police National Computer (PNC) – the nationwide database for criminal records information.

The PNC entry concerns a conviction for assaulting a police officer during a protest in 2018. The protest was against a fascist English Defence League (EDL) rally in Bristol. Pegram told The Canary that officers arrested him after warning him to remove his face covering.

He was convicted of assaulting a police constable. He subsequently appealed his conviction to the Court of Appeal and the High Court. While the conviction was upheld, the High Court stated that:

All the evidence was that the contact with the officer’s face was accidental, albeit the Crown Court found it was reckless.

However, Pegram discovered that not only did the PNC list the wrong officer, it also gave a completely inaccurate description of what happened. It stated that he had punched the officer in the face.

This inaccuracy means that the force is in breach of the 2018 Data Protection Act. And it’s also an inaccuracy that has far-reaching consequences. As Pegram, a mixed-race Black man, sets out in his crowdjustice appeal:

The information on my PNC record is real time information provided to officers on the street. It’s the sort of information that is shared in intelligence briefings and could influence senior officers decision making. We need only look at how willingly the police use force against black people to understand the implications.

Targeted by the police

Pegram wants to take Avon & Somerset Police to court to ensure that the force corrects his criminal record. And he’s also seeking compensation for the “distress and trauma” the police’s data breach has caused. He believes officers have targeted him on a number of occasions due to being flagged as “a violent criminal” on the PNC database.

Pegram – who frequently attends protests around the country – said:

It’s important to put this breach right as it labels me as a dangerous person, when it comes to protest it may influence how the police treat me when I exercise my right to freedom of assembly.

He suggests that his community organising work and his mixed-race identity may also have contributed to this harassment.

A spokesperson for Avon & Somerset Police told The Canary:

Our professional standards department has investigated a number of complaints made by a man alleging officers have harassed him. Each of the incidents he’s highlighted have been assessed and the service provided was deemed to be acceptable in each, with no evidence of misconduct identified.

In January 2022, Bristol Copwatch issued a data rectification notice on Pegram’s behalf. The organisation raised concerns that Avon & Somerset Police is in breach of the Data Protection Act. It urged the police force to change Pegram’s criminal record to accurately reflect the 2019 High Court ruling. The force has still failed to rectify Pegram’s criminal record.

So Pegram feels that he now has no choice but to take the force to court over the data breach. Setting out his intentions for the court case, Pegram said:

The police must be held to account and comply with data protection regulation and my data must accurately reflect the court ruling of 2018 and 2019.

A spokesperson for Avon & Somerset Police told The Canary:

we continue to assess a complaint from the man relating to the accuracy of information recorded about him on the Police National Computer (PNC). Should it be necessary, we will liaise with partners including HM Courts Service and ACRO Criminal Records Office, which manages the PNC.

John’s case highlights Netpol’s long-standing concerns about the way inaccurate information retained on secretive police databases can have alarming real-world consequences. In John’s case, the wrong details on police records reinforces the stereotype of black communities as violent that is so prevalent in institutionally racist everyday policing.

It has taken John’s enormous persistence to discover the false data that means he is routinely targeted and harassed by the police. Now, hopefully, he will raise enough funds to finally start to clear his name.

Represented by Bindmans LLP, Pegram is raising funds to ensure that he can take the police force to court over the suspected data protection breach. Supporters can donate via his crowdjustice campaign.