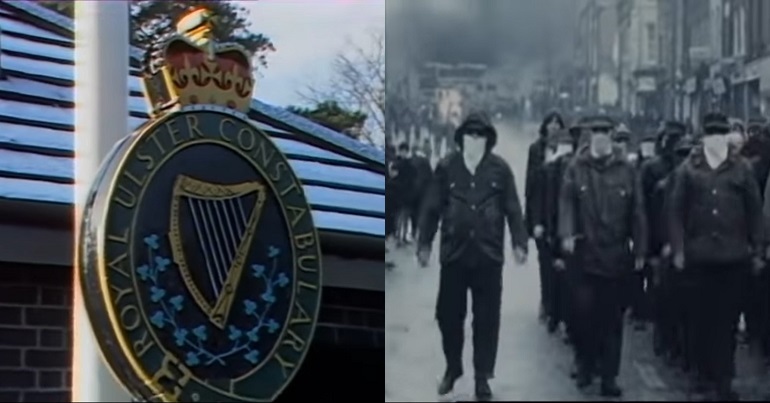 On 8 February 2022, the Police Ombudsman for Northern Ireland, Marie Anderson, released yet another report into collusion between British loyalist terror groups and the British police (RUC – Royal Ulster Constabulary) in Ireland. This time it covered the period from 1990 until 1998, the final eight years of the 30-year conflict.

significant investigative and intelligence failures and ‘collusive behaviours’ by the RUC in relation to a series of murders and attempted murders by the UDA/UFF [loyalist terror gangs] in south Belfast.

The families of the victims of collusion feel vindicated as the Ombudsman upheld “their multiple complaints of collusion in each and every case”. This is the second Ombudsman’s report in 2022 to find “collusive behaviours” between British police and loyalist terror gangs. A legal team representing most of the families is calling for a public inquiry into the activities of Special Branch – one where retired officers will be forced to “account for their actions”. Moreover, that legal team is clear that the Ombudsman’s language means:

Collusive behaviour is collusion, there is no distinction between the two

This report is far from a one off

Over the course of conflict investigations, such findings aren’t rare. Because as The Canary has extensively reported, collusion between British forces and loyalist terror gangs was widespread. So this report goes way beyond “uncomfortable reading” for the British police. Its findings, in addition to all the other revelations and allegations of collusion, dispel any myth that the British state was conducting anything other than war in Ireland for those 30 years. And it was a dirty war.

This and other reports also show, according to justice campaigner Ciarán MacAirt, that:

collusion was systemic across each police division and the outworking of a deliberate policy to help Loyalists murder and maim citizens, the vast majority of whom were unarmed Irish Catholic civilians.

Regardless of the findings, and almost a quarter of a century later, the British state is still trying to bury the truth and avoid prosecutions. But justice campaigners aren’t likely to allow that to happen.

Anderson’s report examined police actions related to eight loyalist attacks where 11 people were murdered. This included the five people who were murdered at the Sean Graham bookmakers on 5 February 1992.

All these years later, this report does bring some good news for the families. It’s important they, and others still fighting for justice, are foremost in our minds. Their concerns are, in the words of the Ombudsman, “legitimate and justified”.

Anderson, said she was “deeply concerned” by:

the scale and scope of failings identified during ‘a protracted, complex and sensitive investigation’.

Even though she didn’t find evidence that the RUC received information that would have allowed them to stop the eight attacks, this actually concerned her. Because given “Special Branch had a network of informants within the UDA/UFF” it should have got that information. She also found:

instances of weapons connected to murder enquiries being disposed of in inappropriate ways, as well as evidence of records being routinely destroyed by the police.

In a TV interview she added:

it was police’s job to make sure that when they engage with informants that they probed, assessed, and questioned what they were doing. And the continued use of informants whom police were aware, or ought to have been aware, were involved in serious criminality and murder is in my view unforgivable…

This was so much worse than “bad policing”

Welcome as the specific findings are, it’s important to look at a wider picture. Solicitor for several victims’ families Niall Murphy, warned against looking at this report “in a vacuum”. Instead, Murphy said we need to:

And while the report only goes as far as saying there were “collusive behaviours” by the RUC, it’s still damning. There’s evidence that police destroyed records and murder-related weapons were disposed of. In one instance, a Browning pistol which loyalists originally stole from a British army regiment (UDR) and used in the Sean Graham bookmakers attack, was given to an informant and then later returned to the UDR. There was also the bizarre instance of another loyalist murder-related weapon being donated to the Imperial War Museum.

So the attempts by the Police Service of Northern Ireland (PSNI) (the new name for the RUC) to dismiss the Ombudsman’s findings as “bad policing” or “deficiencies and failings” are truly pathetic. Especially given the magnitude of the hard evidence and allegations about collusion between British forces and loyalist terror gangs in this conflict since at least the early 1970s.

The nature of collusion

Andrée Murphy from human rights NGO Relatives for Justice spoke to The Canary. She said many people feel this report is:

the strongest report by the police ombudsman to date on the nature of collusion. And it really adds to the cumulative number of reports now that are in the public domain which confirm that collusion was not just something that happened in some incidences with some police officers with some people. This was something that was completely systemic and widespread.

The families now expect these loyalist “mass murderers to be arrested and prosecuted”. But, according to Murphy, it’s most important those murderers don’t:

take the place of or hide the handlers and the police officers that were involved in systemic wrong doing. We have no idea if those RUC officers were pensioned off under Patten [Chris Patten’s report that looked at police reform in the North] if they might still be in the PSNI, if they might have been brought back into the PSNI…as civilian workers.

Murphy also believes that, based on previous reports, collusion involved the RUC Special Branch, the British army’s Force Research Unit (FRU), and security services, there now needs to be:

a full inquiry into what happened with the three arms of the collusion stool.

Moreover, these latest revelations of collusion appear to be a continuation of brigadier Frank Kitson’s counterinsurgency approach of the early 1970s. He believed in targeting the community around the IRA to persuade them to reject it. Using this metaphor he said:

If a fish has got to be destroyed it can be attacked directly by rod or net . . . But if rod and net cannot succeed by themselves it may be necessary to do something to the water…

According to Kitson, and continuing his metaphor, this could mean “polluting the water”. Kitson further asserted that:

The law should be used as just another weapon in the government’s arsenal, in which case it becomes little more than a propaganda cover for the disposal of unwanted members of the public.

Temporary PSNI assistant chief constable Jonathan Roberts said the report showed examples of “deficiencies and failings” and “bad policing”. However, Roberts distanced present day policing from the report saying the “deficiencies and failings” related to “the handling and dissemination of intelligence by the RUC”. But the RUC was not disbanded with an entirely new police force set up in its place. It simply “became” the PSNI.

These have been addressed by the restructuring of our intelligence systems and processes through the formation of Crime Department.

Policing has developed enormously over the past thirty years and the Police Service of Northern Ireland now have greatly improved policies and procedures which guide our response to potential threats and how we approach criminal investigations.

So he’s effectively saying it’s all in the past and things are much better these days. Well, that certainly wouldn’t be the opinion of MacAirt. In the wake of the Ombudsman’s report, MacAirt, founder of legacy archive Paper Trail, tweeted:

Remember too that .@PoliceServiceNI has done everything in its power to bury these war crimes, protect its killers and handlers, and frustrate the brave victims and survivors – it is doing the same in hundreds of murders up to this very day https://t.co/2UORAcZKwN via @IrishTimes

Andrée Murphy branded the Roberts’s comments “an utter disgrace”. She added they’re (the PSNI) “covering up for the crimes of the RUC”. Furthermore, she said the PSNI:

Furthermore if policing really has changed why are some Irish republican communities still under the police microscope? Why are secret services still being used to target them?

MacAirt made it clear how people in his community feel about the PSNI on legacy issues:

Few in my community have any trust in PSNI as far as legacy investigations are concerned, as we believe that it still has many of these killers – and recent killers – on its books. The PSNI has done little over its lifespan other than prove that it is more interested in protecting the reputation of a sectarian police force in the past, than helping our families’ campaigns for truth and justice.

In fact, the PSNI’s failure to provide information and fair, Article 2-compliant investigations as it battles our families in court, means that many of our families do not believe that PSNI is practically independent. The British courts agree in cases too.

And as solicitor Niall Murphy said:

rather than reflect on how brilliant they are today, why don’t they go out and arrest people?

We won’t let the British shut this down

We want the British government to end its threat to legislate its pernicious Legacy Bill. It continues to traumatize victims and survivors because it wants to bury its war crimes, protect its killers, and deny us equal access to due process of the law.

In a fair and just society, the killers and the dirty cops who armed and managed them would also be held accountable as we fear that where there is no accountability, it will happen again. PSNI has failed to prove that it is in any substantive way different from the RUC.

The British establishment wants to shut reports like these down. They want the world to forget about its “dirty war” in Ireland. But campaigners aren’t going to allow that to happen. These justice campaigns will continue to pressurise British governments until they finally come clean.

To keep up to date with legacy issues keep following: