A glorious week for wolves, a ghastly one for eagles - Canary 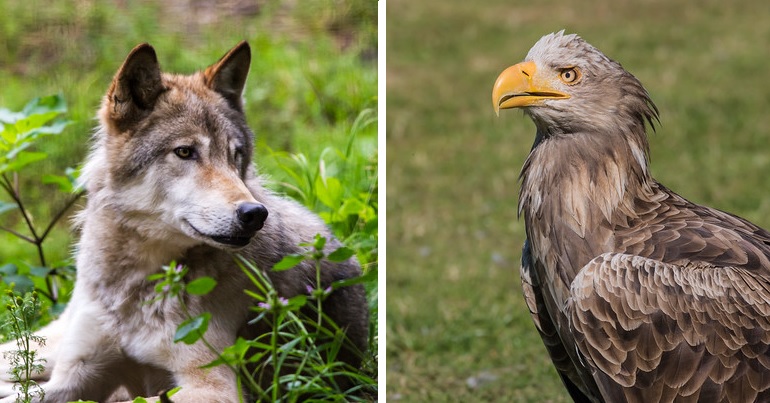 Recent developments on the US side of the Atlantic have given wolves a reason to howl with joy. On the UK side of the ocean, however, eagles have less reason to celebrate. That’s after news emerged about two eagles turning up dead, allegedly on shooting estates.

Welcome reprieve for some wolves

Donald Trump made many anti-wildlife and anti-environment moves in office. One of them was the axing of endangered species protections for wolves. In doing so, he was following in a not-so-great US tradition. Since George W Bush’s presidency, all administrations have advocated for stripping wolves of protections, the Seattle Times has pointed out.

Furthermore, Trump’s successor Joe Biden hasn’t reinstated protections for wolves, despite pressure to do so. That failure has meant states and trophy killers have been merrily colluding to mow wolves down in their hundreds. In early 2021, for example, Wisconsin set a quota for hunters to kill 119 wolves over a week-long period. They killed at least 216 wolves in just 60 hours.

But a judge recently delivered a welcome reprieve to wolves in a number of US states. Ruling in a lawsuit Earthjustice brought on behalf of multiple wildlife-focused organisations, US district judge Jeffrey White restored protections for wolves:

BREAKING GOOD NEWS!
A federal judge just restored protection to gray wolves, reversing a Trump-era rule that removed ESA protection from wolves across most of the lower 48 ➡️ https://t.co/2hWpQYUnis

The judgement doesn’t cover all wolves in the US, however. Wolves in Idaho, Montana and Wyoming remain at risk. That’s because they lost their protections prior to Trump’s delisting decision.

In May 2021, the Center for Biological Diversity and others petitioned the US government to restore these wolves’ protections. The U.S. Fish and Wildlife Service is currently reviewing the matter. And campaigners are continuing the pressure to make that happen:

Unfortunately, the news wasn’t so good for winged predators in the UK this week. Dorset Police announced that “multi-agency operations” in the south of England have recovered the dead bodies of two white-tailed eagles. They found one of the bodies in Dorset in January. Both BirdGuides and Raptor Persecution UK reported that the authorities found the eagles on shooting estates. The eagles were part of an Isle of Wight reintroduction project.

#LatestNews – APPEAL – Sadly, two of the @SeaEagleEngland Isle of Wight reintroduced white-tailed eagles have recently been recovered dead on multi-agency operations in the south of England including one in Dorset. See full details below. pic.twitter.com/MowL4RhBHz

Raptor Persecution UK, written by raptor conservationist Ruth Tingray, argued that the involvement of multiple agencies in the operations is a “clear indication” of suspected criminality. She also said there’s “huge concern” for the welfare of three other white-tailed eagles in Dorset at present.

The existence of Tingray’s website is a testament to the fact that raptor persecution is a big problem in the UK. Shooting estates are by far the most commonly implicated perpetrators of this persecution. Just recently, NatureScot sanctioned a Scottish shooting estate after a golden eagle died of poisoning there. Birds of prey aren’t particularly good for shooting interests, as the former can disrupt the latter’s killing operations.

As wildlife campaigner, devoted birder, and creator of the Off The Leash podcast Charlie Moores told The Canary:

We may never know the true scale of raptor persecution on shooting estates, but what we can say with certainty is that it has almost wiped out the Hen Harrier as a breeding species in England, has limited the expansion of Golden Eagles into the Scottish lowlands and stopped them moving across the border into England, has restricted the population of Goshawks, and is actively looking to control the number of Buzzards.

Despite the scale of the problem, Dorset MP Chris Loder has publicly stated he doesn’t want the police to “spend time and resources” on investigating the white-tailed eagle deaths:

Dorset is not the place for eagles to be reintroduced. I’m not challenging government for more money for Dorset so it goes on this. I don’t condone this at all, but I want @dorsetpolice to focus on #countylines rather than spend time and resources on this. https://t.co/F3D3VCZPmN

1/3 @chrisloder in 30 years dealing with wildlife crime this is one of the saddest & most unbelievable comments I've heard from a politician (& that's a very low bar!) – I note https://t.co/9eRfQPtJf9 your interest in animal welfare and the inspiration from your own dog poppy

The MP responded to the furore by characterising raptors as lamb killers and sharing an article that pictured eagles with lambs in their claws. Unfortunately for the MP, the photographer responsible for snapping some of those pictures has pointed to the fact that they staged them with a captive eagle and an already dead lamb:

As the photographer behind two of these images, I’d recommend you establish the circumstances before using them as evidence. Both are staged for an editorial story using a captive eagle and a dead lamb. Just so you know.

The feeding shots are mine (both used without permission); the flight shot isn’t and to my knowledge, genuine. Sea eagles can take lambs but your tweet implies it’s routine behaviour. It’s generally localised involving specific birds at specific times of year.

So all in all, a mixed week for predators of different shapes and sizes. Some wolves are thankfully better off. While some magnificent birds have tragically, and possibly illegally, been sent to an early grave. And what of the most dangerous predator of all? It seems the so-called leaders among us continue to fall far short of expectations.