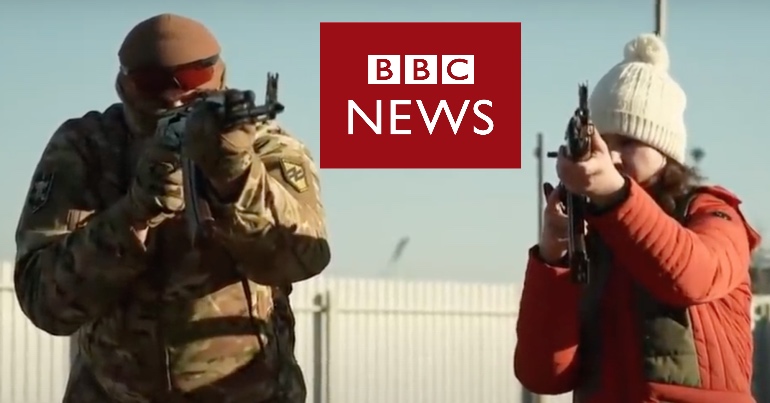 A video shows a five-year-old playing with a gun watched over by a uniformed man from a neo-Nazi organisation. You could be forgiven for thinking this BBC footage was from Louis Theroux’s new documentary Forbidden America. But you’d be wrong.

In fact, this footage was broadcast immediately after Theroux’s documentary about the far-right in the US, on the BBC Weekend News. But unlike Theroux’s expose, this news item failed to mention that the group it platformed is a neo-Nazi organisation known for ultranationalism, anti-semitism, and Nazi iconography.

As part of the BBC‘s coverage of the situation in Ukraine, journalist Orla Guerin reported on people preparing for invasion. The segment covered a training afternoon for civilians organised by the National Guard. But it neglected to tell viewers that it was the Azov Regiment – formerly the Azov Battalion – that ran the training event.

Azov was formed in 2014. Its first commander Andriy Biletsky is now the leader of the far-right ultranationalist National Corps party. In 2010, Biletsky stated that Ukraine’s mission was to:

lead the white races of the world in a final crusade … against Semite-led Untermenschen [subhumans].

Azov’s links to neo-Nazi ideology are well documented. Even the Sun ran an article in January describing it as “neo-Nazi militia”. The paper further stated that:

The US State Department described the group as a “nationalist hate group”, and it’s banned on Facebook.

Despite these well-known links, the BBC uncritically visited the Azov training afternoon. It depicted young and old people learning how to fire guns, including “a granny with a gun”. And, perhaps most worryingly, it interviewed an Azov major. Over the footage of the earlier-mentioned five-year-old, Guerin narrates that there’s “a sense of peril for Ukraine and its people, like 5-year-old…”. She continues her dramatic voiceover, stating there’s a “sense that danger is closing in”.

Yet not once does Guerin mention the dangers of the organisation they’re training with. She simply describes Azov as the “national guard”. The soldier who she interviews is captioned as a “Major” with the “National Guard”.

Euro News also covered the same training event. But the difference is that it headlined its article:

You can watch the BBC segment here:

Even if Azov’s links to the far-right weren’t so widely documented, there is no excuse for the BBC not giving its viewers any background information on the organisation it platformed. Moreover, the BBC itself has reported on those links in the past. A 2014 BBC article contains this description of Azov:

Run by the extremist Patriot of Ukraine organisation, which considers Jews and other minorities “sub-human” and calls for a white, Christian crusade against them, it sports three Nazi symbols on its insignia: a modified Wolf’s Hook, a black sun (or “Hakensonne”) and the title Black Corps, which was used by the Waffen SS.

As a result, the question of the presence of the far-right in Ukraine remains a highly sensitive issue, one which top officials and the media shy away from. No-one wants to provide fuel to the Russian propaganda machine.

You couldn’t make it up.

The Canary contacted the BBC for a response, but it declined to comment.

At best, the BBC‘s coverage could be gross negligence. It reported on an event and didn’t bother to question who was running it. At worst, it was gross manipulation, deliberately ignoring Azov’s far-right connections in favour of dramatic footage of people ready to arms themselves to fight against the evil Russian invaders.

Either way, the BBC has a responsibility to its viewers that it didn’t uphold in this piece. According to Ofcom in 2020, the BBC  “remains the most-used news source”. 56% of adults get their news from BBC One. And according to its charter, the BBC should:

act in the public interest, serving all audiences through the provision of impartial, high-quality and distinctive output..

With its segment on Ukraine, the BBC failed to do this. Instead, it platformed dangerous racists without comment. Whatever its reasons, this is simply not good enough.